Answering the Call to Action: How to Get Involved

The time for change is now. Every member of the Penn Law community—our staff, faculty, students, alumni, and community partners—has something valuable to contribute to the pursuit of a more just and liberated society. Use this resource guide to help you take meaningful action against systemic racism.

This guide is still in its preliminary form and will continue to be deepened and expanded.

One action that you can take today is to learn about and support key racial justice initiatives. Support can come in many forms - from donating to sharing information to volunteering.

There are many organizations doing remarkable anti-racism work, here is a list of some of them:

Amistad Law Project is a prison abolitionist movement and public interest law center fighting for the human rights of all people by providing legal services to incarcerated people in Pennsylvania. Find out more about Amistad Law Project here!

The Bail Project is a non-profit organization designed to combat mass incarceration by disrupting the money bail system ‒ one person at a time. They believe that paying bail for someone in need is an act of resistance against a system that criminalizes race and poverty and an act of solidarity with local communities and movements for decarceration. The Bail Project also stands ready to provide bail assistance to protestors in cities where they have offices. Find out more about The Bail Project here!

The NAACP Legal Defense and Educational Fund is often viewed as America’s premier legal organization fighting for racial justice. Through litigation, advocacy, and public education, LDF seeks structural changes to expand democracy, eliminate disparities, and achieve racial justice in a society that fulfills the promise of equality for all Americans. LDF also defends the gains and protections won over the past 75 years of civil rights struggle and works to improve the quality and diversity of judicial and executive appointments. Find out more about the NAACP Legal Defense and Educational Fund here!

NPAP is a non-profit that protects the human and civil rights of individuals in their encounters with law enforcement and detention facility personnel. With over 500 members and growing, NPAP continues to effect change in the flawed legal system and fight to put an end to police brutality of all forms. Find out more about NPAP here!

Penn BLSA is committed to the fight against racial injustice and has created a standing fund to support organizations at the forefront of Black Lives Matter movements as they arise. Penn BLSA community has contributed to the Minnesota Freedom Fund, Philadelphia Bail Fund, Black Visions Collective, the Official George Floyd Memorial Fund, Communities United Against Police Brutality, and Reclaim the Black to support protesters, organizers, and legal aid organizations on the frontlines of the current resistance.

How to support Penn BLSA:
Contribute to Penn BLSA’s standing fund for racial justice through Venmo by sending your donation to @PennBLSA. Please include “Black Lives Matter” in the payment description. Penn BLSA will announce the organizations that receive donations from the fund.

Resist is a foundation that supports people’s movements for justice and liberation. They redistribute resources back to frontline communities at the forefront of change while amplifying their stories of building a better world. Find out more about Resist here!

Youth Art and Self-Empowerment Project (YASP) is building a youth-led movement to end the practice of trying and incarcerating young people as adults. Through its work in the Philadelphia jails, YASP provides space for incarcerated young people to express themselves creatively and to develop as leaders both within and beyond the prison walls. Find out more about YASP here!

YSRP works to keep children out of adult jails and prisons, and to bring home people who were sentenced as children to life in prison without the possibility of parole. Find out more about YSRP here!

Whether it is signing a petition or contacting congress, advocacy work elevates voices and paves the way for change. This section will regularly be updated to include timely advocacy opportunities. 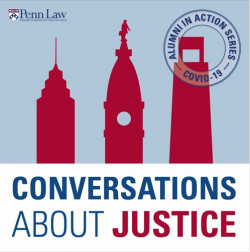 If truly centered on justice, what could our society achieve? Emily R. Sutcliffe speaks to public interest leaders about their current efforts toward equity and their visions for a better future.