The novel coronavirus (COVID-19) pandemic has cancelled or postponed many University of Pennsylvania Carey Law School events, but the previously scheduled International Strategic Crisis Negotiation Exercise (ISCNE) in partnership with the U.S. Army War College’s Center for Strategic Leadership (CSL) moved forward as planned – virtually – with participants scattered across the country and even the world, including Pennsylvania, Maine, Wyoming, Virginia, and China.

According to Lt. Col. Steven Hildebrand of the U.S. Army War College, who played the role of the foreign minister/secretary of state in the exercise, last year Penn was the first law school to host an ISCNE and this year it became the first group to conduct an ISCNE remotely.

The unique experiential learning opportunity led by the Law School’s Theodore K. Warner Professor of Law and Professor of Real Estate Michael Knoll and Senior Lecturer in Law Col. (Ret.) Paul J. McKenney, is designed to engage and educate law students in the process of crisis negotiation at the highest strategic level. Last year, the exercise was held on campus, but this year because of coronavirus pandemic precautions, it was held through Zoom online.

“I’m so glad that this exercise went ahead in this extremely challenging time,” said Ted Ruger, Law School Dean and Bernard T. Segal Professor of Law. “We are pleased to be able to offer continuity for law students during a time when so much is up in the air, and I look forward to holding this annual course component next spring in-person.”

Ambassador (Ret.) Daniel Shields played the United Nations representative, and the adjustments made to the simulation by Amb. Shields and Lt. Col. Hildebrand were “crucial” to the success of the exercise, said Professor Knoll.

Other key individuals in pulling together the remote exercise on short notice include Aaron McKenney L’19, Dean of Curricular Affairs Eleanor Barrett, and Associate Dean for Academic Affairs and Registrar Claire E. Wallace as well as the many other members of the Law School’s senior staff. Professor Knoll and Col. McKenney were especially appreciative of the mentors and teaching assistants who worked closely with the students over the three days to provide guidance and feedback.

Professor Knoll is also the Co-Director of the Law School’s Center for Tax Law and Policy. Colonel McKenney is President and CEO of McKenney Financial Group, a wealth management firm headquartered in Portland, Maine and a former U.S. Army War College faculty member.

“Everyone worked hard to get this course up and running so we could continue with our educational mission and ensure that our students had the credits they needed to graduate and take the bar exam,” said Professor Knoll. “What we did not realize at the time was with all the disruption to ordinary daily returns and the increased isolation was how rewarding it would be for everyone involved to be able to interact in a serious, professional way for an extended time.” 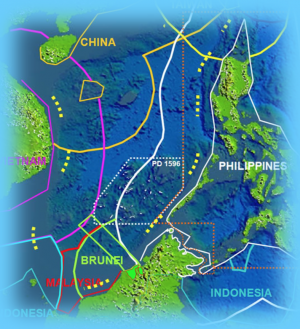 The exercise called on eight teams of law students to negotiate a simulated “Chair’s Statement on South China Sea Conference Outcomes” as representatives of member nations of the Association of Southeast Asian Nation (ASEAN) and the East Asia Summit (EAS): Vietnam (Host and Chair), Brunei, China, India, Indonesia, Japan, the Philippines, and the United States. In pursuit of an agreement, the teams had to apply multilateral diplomacy, or diplomacy that involves multiple governments, such as that of the United Nations.

The simulation began on Thursday evening to ensure everyone was set up well technologically and to hold team meetings, introduce mentors, assign roles, and devise strategies. On Friday, two full days of team meetings and negotiation sessions commenced. An overall plenary session and an after-action report (AAR) concluded the exercise.

As Amb. Shields noted, such an exercise has “no clear winner,” but it was rather up to the teams to decide for themselves how well they met the game’s objectives of carrying out their own government’s privileged instructions and working with other teams to influence the language that would appear in the final diplomatic text.

“This exercise was only possible because of the extraordinary support we received from Dean Ruger and his entire team every step of the way,” said Col. McKenney. “It is a great honor to work alongside Michael Knoll and to have an opportunity to enhance the educational experience of so many talented students. We were fortunate to have a wonderful team of mentors and the support of our Army War College colleagues as well.”

Justin Prelogar L’20, who played the role of the Head of Delegation for Vietnam and Host and Chair of the Conference, called the simulation “wonderfully challenging” and praised his fellow participants’ dedicated efforts throughout the exercise.

“With approximately 75 student-delegates working to negotiate, compromise, and agree on difficult diplomatic questions, we certainly had our work cut out for us,” Prelogar said. “While each delegation was bound to operate within the confines of its country-specific guidance, delegates exhibited remarkable creativity and a keen interest in arriving at a mutually beneficial outcome.” 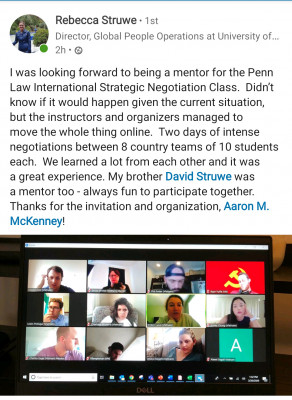 Aaron McKenney commented specifically on how well the virtual aspect of the exercise came together.

“Zoom provided a nice venue where each country team was provided a virtual ‘room’ and then separate negotiation ‘rooms’ were set aside for pre-scheduled and ad hoc negotiations,” he said. “Country teams could send up to three team members to multiple negotiations at the same time. For their part, the course leadership could move students to the appropriate virtual room at designated times and hop between rooms to observe negotiations as needed. Additionally, the course directors decided to incorporate the Coronavirus pandemic into the scenario itself, contributing to a level of realism for students.”

* For the most current information on the Law School’s response to the novel coronavirus (COVID-19), please visit https://www.law.upenn.edu/coronavirus.