A recent graduate and a current student in the University of Pennsylvania Carey Law School’s Master in Law degree program have put their legal educations to good use and have been recognized for their accomplishments in their respective fields of expertise. Dr. Kiran Musunuru ML’19 has launched a groundbreaking company poised to lead a new path to fighting heart disease, while Jehan Luth ML’20 claimed the grand prize in the Developers Challenge at the 2019 ATL Cyber-FinTech Global Innovation Challenge for his innovative startup that helps reach consumers with recalled product information.

Both innovators recently presented 15-minute flash presentations at “Law 2030: A Global Conversation About the Future of the Profession,” a two-day conference at the Pennovation Center that brought together leaders in the law, health care experts, and innovators from across a wide range of disciplines to discuss change in the legal profession.

“I am really proud we have been expanding our education for non-lawyers through the ML program,” said Ted Ruger, Dean of the Law School and Bernard G. Segal Professor of Law, after hearing these presentations. “The general trend, which is good both for legal education and for the country, is that law schools are educating people outside the JD program, recognizing, as these brilliant thinkers have illustrated, how so many other fields intersect with law. It’s a great thing for law and it’s a great point of connection and innovation.” 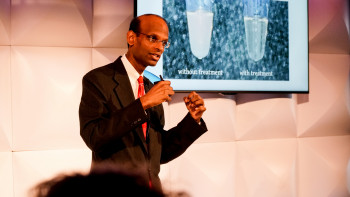 Dr. Kiran Musunuru ML’19Last May, as co-founder and scientific advisor, Musunuru launched Verve Therapeutics with $58.5 million in financing from GV (previously Google Ventures), ARCH Venture Partners, F-Prime Capital, and Biomatics Capital. With a laboratory base at the Pennovation Center, Verve is dedicated to using gene editing, a technique that rewrites DNA in our bodies, to combat heart disease.

Musunuru conducted much of the preclinical work on a naturally occurring gene variant that lowers the risk of coronary artery disease in his lab on campus. With this research, Musunuru hopes to develop protective gene editing therapies for people at risk of the disease that could help safely reduce cholesterol and otherwise help prevent and treat heart disease.

At Law 2030, Musunuru presented, “Using Gene Editing to Eradicate Heart Disease, the #1 Killer,” about his work at Verve, which grew from a small laboratory at the Pennovation Center. Musunuru spoke of a future world with a “once-and-done gene editing therapy” administered through a “vaccination-style strategy” to the general population that could significantly lower heart disease rates and dramatically increase life expectancy.

“Learning about business law, regulatory law, and intellectual property law through the Penn Law Master in Law program was enormously useful in better understanding how to translate research from my academic laboratory to a company with the resources to develop it into a therapy that will benefit humankind,” said Musunuru.

Musunuru is an associate professor of cardiovascular medicine and genetics at Penn’s Perelman School of Medicine. Verve has established collaborations with Beam Therapeutics in Cambridge, Massachusetts and license agreements with the Broad Institute of Harvard University and the Massachusetts Institute of Technology as well as with Harvard. 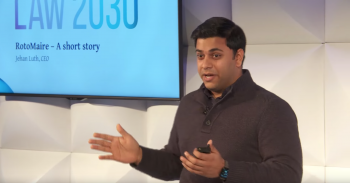 Jehan Luth ML’20In September 2019, Luth, CEO and founder of RotoMaire, was awarded the $10,000 grand prize in the Developers Challenge at the 2019 ATL Cyber-FinTech Global Innovation Challenge. The competition was co-sponsored by Sertainty and Atlanta Tech Park, and the six finalists were assigned the task of incorporating Sertainty UXP Technology into their projects.

RotoMaire provides a product recall platform that allows retailers and distributors to communicate directly with consumers. As part of the challenge, the company used the Sertainty Workflow Data Protector and Software Developer’s Kit to integrate a security system that protects sensitive data.

At Law 2030, Luth presented, “Better Connecting Manufacturers of Recalled Goods with Consumers” and spoke about the unfortunate, personal event that led to the idea for his company, which was a car accident in which a child was injured because she came unbuckled from a car seat that Luth later learned had been recalled six months prior.

Along with praise for Penn Law’s Master in Law program, Luth emphasized the importance of innovators making an effort to understand the legal framework around privacy and data. “We were able to find a solution to a complicated problem by relying on knowing the law around data, which is very important.”

Luth issued a call to action to other innovators as well.

“Learn the law,” he said. “Learn what you can do, and learn what you should be doing, and then innovate around it.”

Luth also holds a Master of Public Health from the University of Pennsylvania School of Medicine.