Skip to main content area Skip to institutional navigation Skip to search
« Back to The RuleOfLaw Post
Guantanamo Bay, interrogation and torture • February 03, 2020 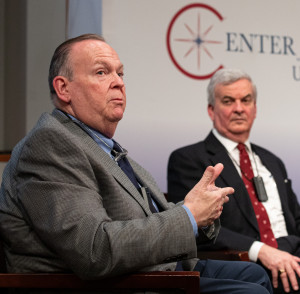 On January 16, 2020, I participated in a panel discussion at the Center for Ethics and the Rule of Law (CERL) at the University of Pennsylvania Carey Law School following a screening of Scott Z. Burns’ epic film “The Report.” I’m not sure there’s a more fitting setting for a screening of ‘The Report” than CERL, a nonpartisan center dedicated to preserving and promoting the rule of law in national security and to raising public consciousness on the ethical dimensions of policy decisions.

Professor Finkelstein, Mr. Mora, Dr. Xenakis, and I are also contributors to Interrogation and Torture: Integrating Efficacy with Law and Morality” published by Oxford University Press as a volume in its Series on Ethics, National Security, and the Rule of Law. While Scott Z. Burns was a producer and writer best known for the films “Contagion” (2011), “Side Effects” (2013), and “The Bourne Ultimatum” (2007), it was Eban’s 2017 article on the role of psychologists in the post-9-11 torture program titled “Rorschach and Awe” that drew Burns into making “The Report.” The issues covered in the film are the same issues the CERL panelists have studied for years through their journalism, law, philosophy, ethics, psychiatry, military, investigative, and national security lenses.

This Amazon Studios film starring Adam Driver and Annette Bening chronicles the Senate Intelligence Committee’s real-life investigation of the CIA’s use of torture after 9/11 and Senate staffer Daniel Jones’ seven-year investigation and 6,700-page report. As the author of Unjustifiable Means: The Inside Story of How the CIA, Pentagon and US Government Conspired to Torture, I know well the issues associated with the U.S. torture program, including how embracing torture has corrupted both individuals and institutions. I spoke with Burns when he was researching the film and with Jones during his investigation to illuminate the issues associated with state-sponsored torture. I also spoke with Senator Diane Feinstein and the late Senator John McCain. This was also not my first screening of film. I attended a screening at the Newseum with Burns, Jones, Senator Feinstein, Sheldon Whitehouse, Senator Angus King, and other notable figures, as well as participating in a previous post-screening talk at The Citadel.

Film reviews called the film “a smart, adult drama” that is “utterly absorbing” (The Guardian), “a gripping film” (The Atlantic), and “a bristling reminder that truth still matters” (Rolling Stone). Fellow Interrogation and Torture contributor U.S. Air Force Colonel (Ret.) Steven M. Kleinman reflected on torture and “The Report,” writing that he remained “hopeful that the film might serve as an opportunity for narrowing the partisan divide on the issue of torture and promoting a more reflective debate on the considerable moral and strategic issues involved. It would be encouraging to see this movie embraced as a reminder that the United States still possesses the moral courage to acknowledge even its most egregious errors, take responsibility for the consequences and set about ensuring a similar lapse of judgment never recurs.”

Colonel Kleinman’s call for national leadership was abruptly answered just weeks later when Donald Trump’s appointed Secretary of State and former CIA Director Michael Pompeo published his own movie review of “The Report” on Twitter calling it fiction. He denounced the movie, reverting to the CIA’s legacy talking points and invoking the argument that patriots at the CIA have kept us safe since 9/11. Secretary Pompeo concluded by reaffirming that he has their back. While I agree that there are countless national security professionals that have kept us safe since 9/11, those involved in the torture programs of the CIA and military are not among them.

Torture is an act of cowardice; it brings dishonor to the military and is a disservice to those national security professionals, including those at the CIA who refused to condone brutality and the sanctioning of depraved and barbaric practices. Nils Melzer, the UN Special Rapporteur on Torture, said in a keynote speech on International Human Rights Day that the “reality of torture is dirty, it is ugly, it stinks of vomit, blood and excrements, it is sickening, heart-wrenching and absolutely horrifying…no one who has ever faced the reality of torture could ever still cling to the illusion of it being compatible with humanity, with dignity, and with any notion of respectable and responsible human life.”

While Secretary Pompeo’s contentions are deplorable and outright wrong, they are not without precedent in an era of “fake news” and “alternative facts.” Like many within the torture lobby, including torture apologists and history revisionists, Pompeo seemingly hopes the public will latch onto the “we did it for you” argument and blindly accept this version of the facts. Unfortunately, these contentions have been successful with the uninformed and misinformed public and interrogational torture fetishists.

I’m among those who believe that the glorification of torture in television shows like “24” and movies like “Zero Dark Thirty” contribute to the American public’s thirst for torture. As Professor Darius Rejali states in his Interrogation and Torture chapter, “Fetishizing torture…protects professionals from criticism and helps them maintain their offices.” Rejali points out that Americans “only became supportive of torture in the first year of President Obama’s term.” It was Obama who established a policy of impunity for torture with his forward, not backwards, approach to accountability and the marginalization of victims with his “we tortured some folks” vernacular.

Unfortunately, as Rejali points out, torture approval has become a partisan issue. In 2002, Republicans and Democrats opposed torture in equal numbers, yet by 2017, about 71% of Republicans and Republican-leaning independents supported torture in some circumstances whereas 67% of Democrats and Democratic-leaning independents believed there are no circumstances under which torture is acceptable. While Bush sanctioned torture and Obama gave it sanctuary, the Trump administration seems to have embraced it with celebratory comments about brutality, warriors, and killing. In the echo chamber of “fake news” and “alternative facts,” a John McCain-less Republican party seems to have learned helplessness when it comes to challenging the false narratives of the torture lobby.

Trump, Pompeo, and others tainted by the corrupting influence of torture’s intoxicating and addictive lure may take comfort with the torture fetishist approach. I do not. U.S. Marine Corps Brigadier General John G. Baker (and his co-authors) wrote a chapter in Interrogation and Torture titled “Drinking from the Poisoned Chalice: A Portrait of the U.S. Military Commissions at Guantanamo.” Over the years I have seen policymakers, screenwriters, journalists, and members of the public willing to drink from that poisoned chalice. “The Report” should serve as a warning of how easily so many with impaired judgment can march in numb unison towards the false promise of torture ideation, and how it jeopardized two principles this country was founded on: inalienable and non-derogable human rights and the rule of law.

The powerful message of “The Report” lies within the truths it tells. Scott Burns relied on facts during the writing process and didn’t succumb to any pressures to fictionalize events for dramatic reasons. He let the facts speak for themselves, facts that can be verified in the Senate report’s executive summary and the ever-increasing declassifications and new disclosures that continue to emerge. My fellow panelists and I can also attest to the accuracy of these facts and the strategic cost and consequences of our government’s actions. The most common hash tag associated with “The Report” on social media is “#TruthMatters.” The truth of “The Report” is self-evident, once you know the facts.

[1] The “XXX” text represents text that was redacted by the Department of Defense Office of Prepublication and Security Review. This piece was submitted to the government for prepublication review on January 2, 2020, and approved for publication on January 30, 2020. It was intended to be published after “The Report” screening at CERL on January 16, 2020. The author is a plaintiff in a lawsuit challenging the constitutionality of the current prepublication review system and is represented by the Knight First Amendment Institute and the ACLU. The author asked Knight/ACLU to assist after 2.5 weeks in the review process. Knight/ACLU also assisted in the publication of “Unjustifiable Means: The Inside Story of How the CIA, Pentagon and US Government Conspired to Torture” (Regan Arts 2017) and “Interrogation and Torture: Integrating Efficacy with Law and Morality” (Oxford University Press 2020).