In the fall of 2019, a group of Penn Law students led by Professor Eric Feldman spent a week in Japan exploring the current state of robot technology and development in this year’s Global Research Seminar (GRS), “Robot Revolution: Legal, Ethical, and Policy Challenges of Robotics in the U.S. and Japan.”

“Both [Japan and the U.S.] are at the forefront of the global race to develop robots, and both have presented blueprints for how robots will solve their most intractable social problems,” said Feldman. “Yet neither nation has developed a legal or policy structure that effectively and comprehensively addresses the widespread deployment of robots.” 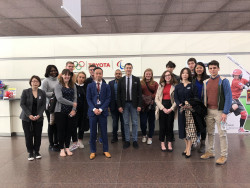 During the semester at Penn Law, the seminar provided students with a framework about issues surrounding robot technology, ranging from artificial intelligence (AI) in criminal sentencing to robots serving as sexual companions. The class read cutting-edge scholarship on AI and machine learning, studied innovative humanoid robots, explored litigation concerning robots, and otherwise pondered legal and policy options for managing conflicts sure to arise as robots become more integrated into society.

In Tokyo, the students held meetings with various executives and industry leaders from Sony, Toyota, and Microsoft Japan. Jessica Rizzo L’21 explained that some meetings were formal and resembled academic conferences while others were over shared meals.

“[The executives] were generous with their time and patiently answered our many questions about balancing the benefits of innovation against privacy concerns, entrenched bias in AI, and the specter of mass unemployment,” said Rizzo.

One of the highlights for Rizzo as well as for fellow GRS student Ed Grigg LLM’20, a Thouron Scholar from the U.K., was meeting roboticist Hiroshi Ishiguro, director of the Intelligent Robotics Laboratory of Osaka University’s Department of Systems Innovation in the Graduate School of Engineering. Ishiguro, who has famously built an android version of himself, spoke to GRS participants “about the complex motives driving people across cultures to embrace or resist the coming ‘robot revolution,” said Rizzo.

The students also toured research laboratories at Waseda University and Tohoku University to see robots being programmed, including those designed to assist during natural disasters and others that play musical instruments.

“One could play the saxophone!” noted Grigg. 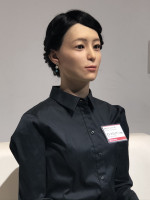 According to Rizzo, the diversity of the seminar’s participants provided for “ample opportunity for international exchange long before we got to Tokyo.” About half of the class members are JD candidates from the U.S. while the rest are LLM students from around the world, including countries such as France, Ireland, Bahrain, Germany, and China.

In their week-long stay in Japan, students were also exposed to many aspects of Japanese culture from Grigg’s favorite nakoaochi (tuna rib) to Rizzo’s enjoyment of performances at the National Noh Theater and Kabuki-za Theater. Betha Igbinosun LLM’20 of Nigeria was amazed by the chaos of the famous Shibuya crossing.

Feldman is an expert in Japanese law, comparative public health law, torts, and law and society. He is the Heimbold Chair in International Law at the Law School as well as Professor of Medical Ethics & Health Policy and Deputy Dean for International Programs. Eri Osaka LLM’00, current SJD student, and law professor at Toyo University managed many logistics for the GRS visit in Tokyo.

The GRS is an innovative teaching model that combines classroom preparation with an overseas field research visit during which students and faculty meet with primary stakeholders on key topics in public and private international law.