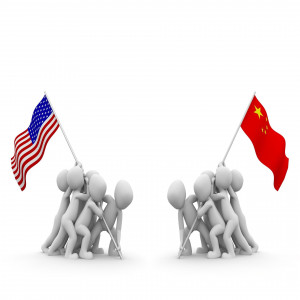 China poses a quiet new threat to the democratic values American prize, such as free speech, privacy, free-market competition, and even the rule of law.  Over the past few years, China has leveraged technology to compete fiercely for global influence with the United States, a fact that has gone largely unnoticed by the American public. The nature of this bilateral rivalry has no precise historical precedent. This post suggests that the relationship can be thought of as a “grey power competition”—a mashup of the phrases great power competition and grey zones. China and other rivals are using subtle, grey tactics that hover just below the level of actual warfare to subvert U.S. values and interests. They include industrial espionage, the weaponization of space, internet censorship, information warfare, and electronic surveillance, all of which are technology dependent.

Because of recent events, the American public may finally be waking up to the prevalence and ambition of China’s global influence over Western liberal values. Examples of these events include a cascade of related stories:  the recent criticism by the Chinese government of an NBA Houston Rockets general manager over a tweet supporting Hong Kong democracy protests, the ensuing blackout of the NBA in China, and the unprecedented “troll mob” attack on that general manager by China’s propaganda apparatus.

The NBA episode might be the first incident many Americans have heard of that illustrates just one of the many subtle tactics that authoritarian countries are using to weaken democratic influence. But it is just the tip of the iceberg. Chinese influence extends way beyond basketball into education, business, and security. Over the past two decades, I have conducted field work in nearly twenty countries, focusing primarily on how China is changing the world—especially on how China is impacting Asia, as that is the main theater of rivalry. The anxieties expressed by many of the people I interviewed are now being realized. Today, China exerts newfound influence in all regions of the world and across all warfare domains, including air, sea, land, space, cyber, economics, information, education, lawfare, and the electromagnetic spectrum. The future has arrived.

Are the past 70 years of relative peace and liberal internationalism merely an aberration?  What is happening now in China may, in fact, be simply a return to the historical norm or “a normal state of play” —a norm characterized by realpolitik and transactional relations. If so, how can we describe this new era? The question is worth further consideration because it will shape U.S. grand strategy and determine whether the United States can continue to live in relative peace with illiberal systems. One way to conceive of today’s geopolitics is as a “grey power competition.” While policymakers and experts in Washington, D.C., and Asia are increasingly describing a return to great power competition, defense planners are struggling to adapt to its tactical implications or define what “competition” even means.

Awareness of this new reality has entered Western military doctrine, corporate strategies, and think tank analyses. Flying somewhat under the radar, several books published in the past year also examine this phenomenon: Shadow War by Jim Scuitto, Stealth War by Robert Spalding, and The New Rules of War by Sean McFate. While these works deserve praise, their use of the word “war” may belie the more hidden, ambiguous tactics that are less martial and more covert, corrupt, and coercive.

Relations between rival powers have also become greyer. The tactics these powers use against one another and the effects they achieve have become more gradual, less violent, and less perceptible to citizens and decision-makers. These relations have become an indefinite, unending, jostling, poking, and surveilling competition (not a race) for power and influence with no “end point” in sight. As each competitor in this never-ending game builds up its weaponry and technology, all the other players become more vulnerable and therefore keep competing indefinitely. As former FBI official Bill Priestap noted: “We have a huge bullseye on our back… .  Objectives have expanded, the people the nation states utilize has expanded in kind. And so instead of just using spies in the people they recruit, today our adversaries are using people from all walks of life, businessmen and attorneys, scientists, professors, students, journalists, you name it. Whoever might be able to get access to the things the foreign nations want.”

What is being described here is an all-out war without overt violence or a specified battlefield, one in which anyone can be recruited to serve as a “combatant.” One of the central features of this “grey” competition is the deployment of tactics that fall just under the threshold of violent warfare—so called hybrid warfare or grey zone conflicts. And technology is a key component of those tactics.

For an example of the gravity of this expanded tool set that countries like China are using to obtain U.S. technology and secrets, one only needs to read China’s astounding 2017 national intelligence law. Article Seven of the law obliges any Chinese organization or citizen to “support, assist, and cooperate with state intelligence work according to law.” That’s more than a billion potential informants. Given that China is a country that rules by law rather than follows the rule of law, cooperating with authorities may not be optional. How is one to know who is a citizen and who is a citizen-spy? The consequences are beyond the liberal democratic imagination. Another tool China uses that contradicts Western norms like free speech, rule of law, and transparency is the recruitment of ethnic Chinese around the world to help advance the state’s interests.

Regarding attempts to ask ethnic Chinese living abroad or attending universities in the West to help advance China’s state interests, defense analyst Timothy Heath has noted that activities targeting the Chinese diaspora don’t draw attention for the most part but could pose as significant threats, and that those activities would have more impact in countries with a sizable Chinese migrant population, particularly those in Southeast Asia, Australia, and New Zealand, areas that have economic and strategic value to China.

As a consequence of this new reality, the U.S.-China relationship, arguably the most important one in the world, has become greyer in at least three ways. First, the nature of what constitutes a friend or foe is unclear. While the United States and China are competing peacefully for markets and diplomatic ties around the world, there is also potential for cooperation around global issues such as climate change, disaster response, and international development. Yet the two countries also compete in ways that are threatening to the other’s security, including expanding military budgets, building separate information technology spheres and separate Internets, outdoing one another in military technologies, and fighting for dominance at sea. Moreover, the very act of calling one another a strategic competitor or threat can become a self-fulfilling prophecy because our militaries can use the existence of the threat to justify an arms build-up. Yet, by avoiding descriptions of the relationship, the two governments might be accused of being weak, directionless, or naive, which itself can also invite aggression. This conundrum, though, should not lead to paralysis.

Second, many of the tactics in this complicated relationship can be described as grey—falling below violent war, not necessarily illegal but designed to favor one side at the expense of the other. The recent revelations about scientists in the United States “sharing” their innovations and knowledge with their counterparts in China illustrates how murky these actions can be. Some of the transfer of this knowledge was through China’s Thousand Talents Program, which might be seen as a way to help scientists promote their research and help humanity. Despite the humanitarian veneer, it also results in the transfer of U.S.-government funded research to the Chinese scientific community. China’s tactics often exploit American openness in science, markets, trade, education, and the media to its advantage. Again, China is using American values against America. China uses similar grey zone tactics in its Belt and Road Initiative (BRI), its political influence activities, its Confucian Institutes, its construction of a man-made island in the South China Sea, and its deployment of dual-use technology, such as a satellite with artificial intelligence and a repair arm that could also be used as a weapon in outer space.

Finally, the effects of these tactics are also grey. Activities are gradual, non-dramatic, and sometimes even barely perceptible. Evoking the Pearl Harbor or 9/11 attack may be hyperbolic but imagine how the Cold War could have evolved if the 1957 Soviet launch of the Sputnik satellite went unknown to the public.  If the public does not see a threat, the threat is not a concern. These ambiguities, therefore, keep the American and Western public and institutions complacent.  In this ambiguous operational environment, citizens are more concerned with waging rhetorical battles at home over gossipy controversies generated by the media than with seeing the bigger picture. Most Americans may be aware that China represents a great challenge to U.S. power, but the current polarization in American politics is playing right into the hands of a Chinese Leninist strategy that would like to see its opponent divided, distracted, and weak. Today’s sensational media infatuation with manufactured social media controversies, for example, resembles the “Summer of the Shark” stories before the 9/11 terrorist attacks.

The first step towards reducing the impact of grey zone activities is to ensure the public is aware of the grey zone competition. Because China and other authoritarian countries now have the power to influence how we educate our students, to steal billions of dollars of our technology and innovation, and to cripple our transportation and banking systems, efforts to educate the American public are more important than ever. The future of China’s influence has arrived. With concerted action, it is not too late to prevent liberal values from becoming a relic of a brief period in world history.

Devin Stewart is a senior fellow in the Gray Power Competition Program at the Eurasia Group Foundation.

Image by Tumisu from Pixabay