This year’s dinner featured keynote speaker Nicole Isaac L’04, Senior Director of North American Policy at LinkedIn, who formerly served as Special Assistant to the President for Legislative Affairs in the Obama White House. Isaac recounted her professional journey from Penn Law to government service in the Obama administration to her current role as the head of North America Policy at LinkedIn.

The event also featured several current Penn Law students who spoke about their experiences as participants in the school’s initiative. “We are proud to support students as they explore careers in public service, and we are honored to have dedicated alumni like Nicole Isaac return to the law school to inspire future public service lawyers,” noted Neta Borshansky, Director of Public Sector Careers and Government Programs.

Penn Law has a long tradition of preparing students for distinguished careers in government. Its current initiative was established in 2014 with the support of a generous gift from the Leo Model Foundation. This initiative supports internships, externships, and research seminars for students interested in government service and public affairs across a range of fields and issues.

Current students on their experiences 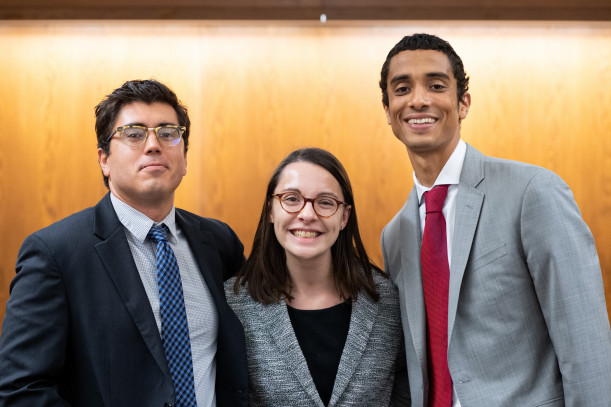 The recent dinner began with remarks from Domenic Powell, a 3L who spent time last semester as an extern in Washington DC for the House Judiciary Committee, where he worked on antitrust issues. Powell then spent this past summer with the New York State Attorney General’s Office, where he dealt with environmental issues.

“Some of the work that I’m most proud of had a very local impact,” Powell said, pointing specifically to his involvement working on a major investigation of lead contamination in New York State. He noted that the investigation involved issues of law and public policy that could easily have “life-changing effects on thousands of children.”

3L Sabrina Merold spoke about her internship at the Federal Policy Team of the Center for Reproductive Rights, where she had the opportunity to write sections of the organization’s comment on the Department of Health and Human Services proposed changes to Section 1557 of the Affordable Care Act.

Sherrod Smith, a 2L, recounted how he came to Penn Law to build on his past experience in government service. He emphasized how much he appreciated the opportunity the initiative provided him to work in the Civil Rights Division of the Department of Justice this past summer. 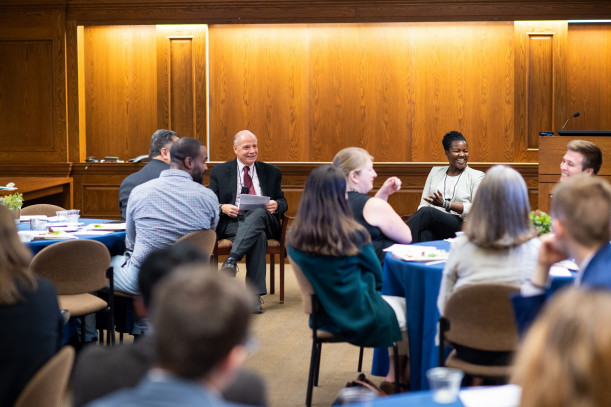 The centerpiece of the evening program consisted of remarks from Nicole Isaac in a session moderated by Professor Louis Rulli, a Practice Professor in Penn Law’s clinical programs.

“And along the way, she took a leave of absence and worked in the Constitutional Court in South Africa, with the Deputy Chief Justice of that court,” Rulli noted in his introduction.

Isaac’s path to the profession

In her remarks, Isaac described her early life growing up in the Bronx. Through the organization Prep for Prep, Isaac earned a scholarship to attend a private school in Riverdale, NY. She  said that she felt that people in school overlooked her as “one of those affirmative action kids,” but she and many of the other scholarship students “rode buses for almost two hours to get there, early in the morning, to perform as well — if not better — than our counterparts because we had to demonstrate to everyone coming behind us that Prep for Prep students could contribute as much, if not more given all of the challenges that they may overcome, to these prestigious institutions.”

That led her to undergraduate study at Brown University and then to the University of Pennsylvania for law school.  While in law school, she pursued a dual-degree for a Master’s in international affairs at Columbia School of International and Public Affairs.

A public service path to the White House

After law school, Isaac took the path of public service, turning down much more lucrative positions in law firms. “I knew that this path would lead me to fulfill my dream and securing the ability to help as many individuals as possible across our country,” Isaac remarked. She spent five years on the Hill before joining the Office of Vice President Biden as his Deputy Director of Legislative Affairs. There, she helped to manage House and Senate engagement for the office and to drive the key legislative priorities of the Administration, such as passage and implementation of the Recovery Act, Dodd-Frank, and healthcare reform.

In 2011, Isaac received a telephone call from the White House Office of Legislative Affairs asking her to join the President’s team as Special Assistant to the President for Legislative Affairs. She said that, after hanging up the phone, “I called my mom and she screamed right into the phone. I — of course — reminded her that while this was a tremendous honor, that I had been working for the Vice President. Of course, I accepted this incredible opportunity to work with the President.”

In her role at the White House, Isaac advised the President and his team on key issues across the House Financial Services, Judiciary, and Appropriations Committees, on issues ranging from intellectual property, patent reform, and banking reform, and worked with over 100 members of Congress on behalf of the White House. In her role she also built support from diverse constituencies and managed relationships across multiple stakeholder groups to advance White House priorities.

After serving in the White House, Isaac moved into the private sector, first serving as a consultant and teaching at Georgetown. She also started a non-profit to increase resources to inner-city communities through technology. It was that non-profit that led her to LinkedIn, where less than a year later, she joined the company to serve as Head of Economic Graph Public Policy Partnerships. LinkedIn’s Economic Graph project uses aggregated insights to digitally map the global economy, providing information about workforce development challenges to better connect individuals with economic opportunities. A year later, she transitioned to serve as the Head of U.S. Public Policy and most recently took on a role as LinkedIn’s Senior Director for North American Policy, where she uses her experience and skills to coordinate overall policy issues for the company at an even higher level.

In 2017, Isaac taught the Legislative Clinic at Penn Law as a Leo Model Government Service and Public Affairs Initiative Policy Fellow. Through the visiting fellows program of the initiative, the school can engage outstanding alumni, like Isaac, and other public sector leaders, including the inaugural director of the Consumer Financial Protection Bureau Richard Cordray, to help guide the next generation of lawyers aspiring toward public service. 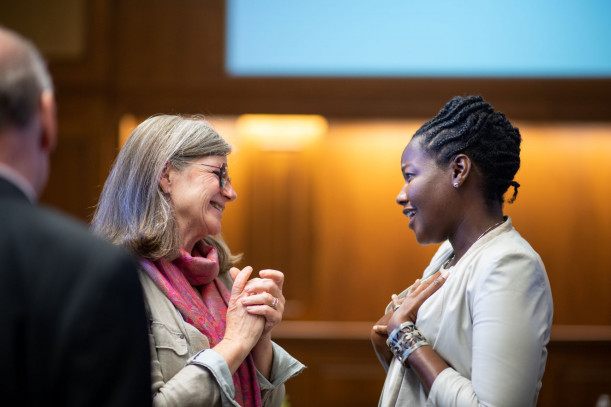 The evening concluded with remarks from Cary Coglianese, the Edward B. Shils Professor of Law and faculty chair of the Government and Public Affairs Committee at the law school. He observed that Isaac’s experience “should remind us all that life is full of risks, but that taking career risks can also bring opportunities and open new doors.”

Coglianese concluded the evening by remarking how Isaac’s career, along with the comments shared during the evening by the student speakers, serve to “inspire us and remind us that what it means to be a lawyer is fundamentally ‘to help people.’”