Pardoning servicemembers under Article II can undermine the rule of law

by Kevin Govern and Jesse Hamilton 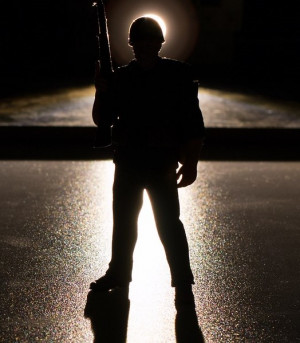 On May 6, 2019, President Trump pardoned Michael Behenna, a former U.S. Army officer convicted in a U.S. military court-martial of executing Ali Mansur Mohamed, a prisoner in Iraq who was set to be released. In another case, President Trump commented publicly during the pretrial and trial phases of SEAL platoon leader Edward Gallagher’s court-martial. Ultimately, Gallagher was acquitted of murdering a young ISIS detainee and attempting to murder civilians in Iraq but was found guilty of posing for a photo with a corpse believed to be that of the young detainee. On July 3, 2019, shortly after Gallagher’s verdict was announced, President Trump tweeted, “Congratulations to Navy Seal [sic] Eddie Gallagher, his wonderful wife Andrea, and his entire family. You have been through much together. Glad I could help!”

President Trump routinely comments before and after military justice cases. He responds favorably to politically motivated calls for clemency of war criminals, and most recently he has directed the revocation of military decorations for prosecutors in a notorious court-martial.  Ill-advised executive pardons can gravely undermine the rule of law by forgiving violations of binding international humanitarian law (IHL) and eliminating accountability for individual war crimes. Additionally, they can warp the presidential power intended to address injustices. Last, pardons should not violate longstanding norms that have existed since our nation’s founding.

Currently, Trump is considering a pardon for Army Major Mathew Golsteyn, a soldier accused of killing an unarmed Afghan, as well as for a group of Marine Corps snipers charged with urinating on the corpses of dead Taliban fighters. In late June, Golsteyn pleaded not guilty to murder and related charges and is awaiting trial. We exhort the president to avoid a cause célèbre approach to military justice, abstain from clemency until courts-martial cases have concluded, and to act with great discretion and discernment befitting a commander in chief when he does decide to grant clemency in a case involving military justice. Most notably, President Trump must not interfere in the military justice process or suggest clemency until the case has concluded.

An immutable principle of international law is that states and other parties to an armed conflict have an obligation to respect and ensure respect for international humanitarian law (IHL) in all circumstances. States must use their influence to prevent and end IHL violations and refrain from encouraging violations by other parties. The United States honors these obligations by expeditiously investigating all such allegations and, where appropriate, pursuing adverse action against those believed to be responsible. Because IHL violations may be charged under the Uniform Code of Military Justice (UCMJ), the appropriate level of disposition may include the initiation of a court-martial.

President Trump’s pretrial and post-trial comments come dangerously close to constituting unlawful command influence (UCI). Article 37(a) of the UCMJ states in pertinent part that “[n]o person subject to this chapter may attempt to coerce or, by any unauthorized means, influence the action of a court-martial or any other military tribunal or any member thereof, in reaching the findings or sentence in any case.” To do so would constitute UCI, a consequence described as having a “corroding effect that could prove deadly to the confidence members of the Armed Forces and the public have in the military justice system” and establish grounds for appealing affected cases.

The national security law expert Stephen Vladeck has astutely pointed out that in at least two past cases, President Obama was found to have committed acts of UCI, even though as commander in chief he was not subject to the UCMJ. The commission of UCI occurred “insofar as [Obama] had alluded in a public speech to the specific ‘consequences’ he deemed appropriate for members of the military convicted of sexual assault — and even though Obama’s comments were not directed at any specific case….[T]he ultimate punishment could not include discharge.” With such precedent, the impact of tweets and public speeches on military justice cannot be underestimated..

Regardless of finding favor with a political base, pardoning war criminals abrogates the duty to ensure respect for IHL and creates moral hazard for service members. Indiscriminate and ill-advised clemency can encourage criminal behavior with anticipated impunity on the battlefield—soldiers may commit crimes with the expectation of a future pardon given political will to grant same. Additionally, pardoning U.S. war criminals may have a negative impact on the ability of the United States to engage in partnered military operations.  Other countries, particularly our closest allies, may be more reluctant to partner with U.S. military forces if the commitment of the United States to investigate and prosecute alleged violations of IHL is called into question.  In the future, the United States may no longer occupy the moral high ground.

Traditionally, U.S. soldiers who harmed prisoners were held accountable for their actions. That longstanding principle of accountability, a foundational concept in the rule of law, was damaged by pardoning Behenna and is at further risk of erosion given other contemplated clemency. Some service member convictions merit an appeal for errors; some service members rightfully convicted seek clemency because of rehabilitation or disparate sentencing. Behenna met none of those criteria. According to court filings, Behenna executed a suspect out of combat and in his custody and then ordered his men to use a grenade to disfigure his body. Behenna was found guilty of unpremeditated murder, served time in prison, and was released early. After a long campaign for clemency supported by current and former elected officials, President Trump pardoned him. Behenna’s pardon removed all further punishment and collateral consequences for his offenses, effectively forgiving him for his conduct in the eyes of the law. The public can logically conclude Behenna’s immoral and illegal actions cease to have any legal ramifications. This undermines the rule of law.

Moreover, unjustified pardons deviate from the longstanding U.S. tradition of upholding ethical conduct in war—a tradition designed to promote order, discipline, and morale—and also hold war criminals accountable. In September 1775, General George Washington, newly appointed to command, was concerned that deviant behavior during war would bring disgrace to the soldiers’ country. As a result, he ordered that “… should any American soldier be so base and infamous as to injure any [prisoner]…I do most earnestly enjoin you to bring him to such severe and exemplary punishment as the enormity of the crime may require.” In the 1800s, President Lincoln issued General Order 100, also known as the Lieber Code, to set out rules of conduct during hostilities for Union soldiers throughout the U.S. Civil War.  This code was widely influential around the world and served as the basis for many subsequent international codifications of the laws and customs of war. For instance, Article 16 specified that military necessity never requires cruelty, acts of revenge, or any action that might make achieving peace difficult. In the 20th century, General of the Army Douglas MacArthur stated in 1946 in conjunction with confirming the death sentence for convicted war criminal General Tomoyuki Yamashita that “the soldier, be he friend or foe, is charged with the protection of the weak and unarmed. It is the very essence and reason for his being.” In the early 2000s, then-Major General James N. Mattis sent a letter to all those in the First Marine Division as they were about to cross the line of departure in the Iraq War, stating in part that their fight was not with the Iraqi people, a population that deserved decent, courteous, and compassionate treatment. Most recently, current and former military officials have urged the Trump Administration to uphold the U.S. military’s longstanding tradition of compliance with the laws and customs of war by holding war criminals accountable.

Any president’s use of the pardon should comport with longstanding legal and procedural norms extant since the Revolutionary War and by processes extant since the Civil War. President Lincoln started the process of delegating review of clemency requests to his attorney general, and indeed Lincoln and President Johnson extended pardons to military above the rank of colonel and to Confederate civilian politicians as a form of reconciliation under Reconstruction.

President Trump has upended this practice and has frequently issued pardons with political ramifications with little or no notice to the Justice Department. While there are very few limits to the president’s pardon power in the U.S. Constitution, this reversal of longstanding norms, seemingly for political purposes, further undermines the rule of law.

The purpose of executive clemency is to correct for injustices that sometimes occur within the legal system. Its purpose is not to arbitrarily forgive those who have been dealt with justly under the UCMJ and especially not to curry political favor or to attempt to divert the public’s attention from other controversial matters.  This is all the more true when the pardon at issue may serve as a detriment to military morale and discipline. Future pretrial and post-trial comments, clemency actions, and pardons should be measured to reinforce military members’ and the public’s confidence in the military justice system, support the rule of law, and discourage future war crimes by members of the U.S. military.

Kevin Govern is a member of CERL’s Executive Board and a Professor of Law at Ave Maria School of Law. He previously taught at the United States Military Academy, John Jay College of Criminal Justice, and California University of Pennsylvania, after a career as an Army Judge Advocate serving in worldwide assignments at every echelon.