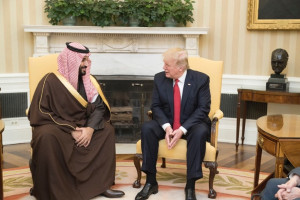 The House Committee on Oversight and Reform released a fifty-page report on July 29 documenting that corporate and foreign interests motivated the Trump administration’s decision to secretly transfer nuclear technology to Saudi Arabia, a charge minority members of the committee have denied. While the committee’s allegations of corruption are deeply troubling, they distract from the larger concern that the secret authorizations violated the law and jeopardized national security. Congress should assert its oversight power to fix this breakdown in America’s nuclear protocol by ensuring a process that is transparent, lawful, and aligned with America’s national security interests.

Allegations of conflicts of interest between senior Trump administration officials and Riyadh’s quest for nuclear energy are not new. (ProPublica first reported on this story in 2017.) The Majority’s report, however, reveals for the first time the sheer extent of foreign and corporate influences on White House policy and deserves the attention of every lawmaker in Congress.

America’s nuclear cooperation with foreign states is theoretically governed by the Atomic Energy Act (AEA). The AEA is a product of President Eisenhower’s post-World War II “Atoms for Peace” initiative, which rewarded peaceful law-abiding states with a nuclear energy program. A formal U.S. nuclear agreement, sometimes called a “123 agreement” after the corresponding section of the AEA, must be reviewed by Congress.

Even without a 123 agreement, however, section 57b of the AEA permits the Secretary of Energy to issue so-called “Part 810 authorizations,” which are named after their corresponding section in the Code of Federal Regulations. These authorizations do not permit building actual nuclear reactors abroad, but they do allow U.S. companies to sell reactor designs, nuclear technology, and operational information (including training) to foreign countries. While Congress does not review or approve Part 810 authorizations at present, the administration must keep Congress fully and currently informed of their status.

Yet the Trump administration secretly approved seven Part 810 authorizations between December 2017 and February 2019, which allowed U.S. companies to sell nuclear technology to Riyadh. Absent from the recent debate in Congress is a discussion of how these authorizations violated the law and jeopardized national security independently of the problem of outside influence examined in the Majority report.

A Breakdown in America’s Nuclear Protocol

By approving the seven Part 810 authorizations, the Trump administration violated the law by (1) exercising unlawful secrecy and (2) ignoring or otherwise failing to adhere to federal regulations for granting the authorizations.

The AEA requires the president to keep Congress fully and currently informed of any initiative or negotiations pursuant to a 123 agreement, which the White House has been negotiating with Riyadh since 2012. The Part 810 authorizations were clearly an initiative meant to advance these negotiations given the Trump administration’s desire to win Riyadh’s highly-anticipated tender to build the first of two nuclear reactors next year. The Trump administration violated the plain meaning of this statute by failing to notify Congress as soon as it granted each of the seven authorizations.

Even if the authorizations were somehow distinct from nuclear agreement negotiations, as the administration has argued, Section 303a of the AEA explicitly obliges the energy secretary to keep congress fully and currently informed of any AEA-related activities. These activities must include Part 810 authorizations because they are permitted under Section 57b of the AEA.

The Trump administration justified keeping the authorizations secret to protect the applicants’ proprietary nuclear technology. Although the AEA and federal regulations allow some details of the Part 810 authorizations to be withheld to protect the applicants’ competitive position, there is no legal provision for refusing to notify Congress about the authorizations. To the contrary, Section 57b instructs the administration to identify potentially controversial requests “as quickly as possible so that any required policy decisions or diplomatic consultations” can be “initiated in a timely manner.”

Instead, it took a group of government whistleblowers followed by months of pressure by a Trump ally in Congress to obtain any information about the approvals. While the public still does not have access to the authorizations as they have in the past, the administration finally sent copies to the House Oversight Committee this spring, more than a year after the first authorization was granted.

Failure to adhere to federal regulations

Setting the issue of statutory violations aside, the Trump administration also failed to adequately assess whether Saudi Arabia satisfied the approval factors for granting Part 810 authorizations listed in the Code of Federal Regulations. These regulations permit the Secretary of Energy to grant these authorizations as long as they are not “inimical to the interest of the United States.” But this is not a subjective determination. There are 10 factors the Secretary of Energy must consider in making this determination—a key point missing from the recent debate on the administration’s actions.

The first factor in the regulations is whether the United States has a nuclear agreement in place with the recipient. No such agreement exists. While there is precedent for granting Part 810 authorizations before a nuclear agreement, there is little, if any, precedent for granting them to a non-nuclear-weapon state like Saudi Arabia, which does not have an IAEA Additional Protocol or a Modified Small Quantities Protocol.

Furthermore, the next three factors involve the recipient country’s non-proliferation commitments and status under the United Nations nuclear non-proliferation treaty, or NPT. Although Riyadh acceded to the NPT in 1988, Crown Prince Mohamed bin Salman is flippant about his country’s non-proliferation obligations. During an alarming interview with CBS News last year, he pledged to develop nuclear weapons if he believes Iran is acquiring them. Salman has also refused to renounce enriching uranium fuel beyond what is necessary for nuclear energy.

The penultimate factor pertains to whether the recipient country has access to comparable technology from other sources. Saudi Arabia has abundant access to solar energy, which would be a cheaper, cleaner, and safer alternative. Solar used to feature prominently in Saudi’s energy plans before Salman came to power. In 2012, for example, the government planned to generate one-third of its energy from solar power in 2032. But the plan has fallen by the wayside, and in 2017, the government announced it only expected to generate some 10 percent of its energy from solar by 2032.

The last factor instructs the administration to consider America’s political, social, and security interests prior to granting Part 810 authorizations, especially with respect to the recipient’s obligations under international law. Yet the kingdom has repeatedly violated its most fundamental obligations under international law. In the last two years alone, the Crown Prince has overseen the assassination of Washington Post journalist and part-time U.S.-resident Jamal Khashoggi; the abduction and arbitrary detention of Lebanese Prime Minister Saad Hariri; the commission of human rights violations in Yemen that may rise to the level of war crimes; the imposition of a land, sea, and air blockade against Qatar; and a large-scale crackdown and mass imprisonment of women’s right activists and dissidents amid a bid to consolidate power.

The Trump administration’s actions are disturbing not only because they constitute an affront to the rule of law but also because they jeopardize national security. By cutting out congressional oversight and operating in secret, the administration has rewarded Crown Prince Salman’s reckless behavior over the past two years, brought the world a step closer to a Middle Eastern nuclear arms race, and set a dangerous precedent for other autocratic states with nuclear ambitions.

Crown Prince Salman’s actions over the past two years – whether in Yemen, Turkey, or Qatar – have become increasingly reckless and pose serious national security concerns. By granting the Part 810 authorizations in secret, the administration has effectively rewarded Salman’s egregious behavior with proprietary nuclear technology. Congress lost an opportunity to use the nuclear technology as leverage; it could have developed a strategy with the Trump administration to improve Salman’s behavior in exchange for the authorizations.

Moreover, Salman’s flagrant disregard for international law and lack of restraint means his threat to develop nuclear weapons ought to be taken seriously. Riyadh’s pursuit of nuclear weapons would inevitably spark a nuclear arms race with Tehran, a scenario with potentially disastrous national security consequences as it would further destabilize a region already plagued by terrorism, state failure, and a refugee crisis. Were Congress kept informed, it could have pressured the administration to obtain a commitment from Riyadh not to enrich uranium or at least sign onto the IAEA Additional Protocol prior to issuing the seven authorizations.

Finally, the administration’s decision to approve the authorizations without any concessions from Riyadh sets a dangerous precedent. It is difficult to imagine how the autocratic or despotic governments of other nuclear-ambitious countries like Egypt, Thailand, Indonesia, or Bangladesh will be deterred given America’s cooperation with Saudi Arabia. Had Congress been informed, it could have at least raised the possibility of extracting concessions from the Crown Prince prior to granting all of the authorizations and put other nuclear-ambitious countries on notice.

The Trump administration’s secret approval of the seven Part 810 authorizations have revealed a breakdown in America’s nuclear protocol. The below recommendations can strengthen Congress’ oversight role and ensure a process that is transparent, lawful, and in line with America’s national security interests.

Failure to pursue these recommendations will exacerbate this administration’s disregard for the rule of law, especially Congress’ duty to check and balance the president’s actions. Even worse, if Congress does nothing, their indifference will have brought the world a step closer to a nuclear arms race in the Middle East—a horrifying outcome that is antithetical to the Atomic Energy Act and President Eisenhower’s vision for peaceful nuclear cooperation.

Theo Wilson is a Master of Public Affairs candidate at the Woodrow Wilson School of Public and International Affairs at Princeton University and a participant in CERL’s 2019 Summer Internship Program. Previously, he was the Middle East & North Africa Senior Program Officer at Freedom House, a pro-democracy organization based in Washington, D.C. He is on Twitter at @twilson008.

Image source; image is not copyrighted and is labeled for commercial and non-commercial reuse.