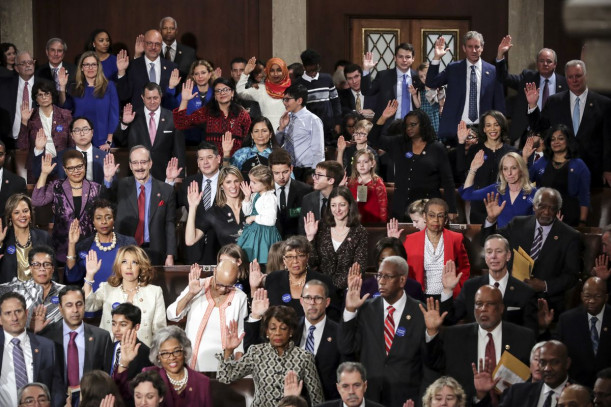 The 2018 Congressional election was a watershed moment in American political history. The US Constitution, specifically Article I, Section 2, was drafted with the intent of creating a chamber of parliament most representative of the country’s citizenry, drawing on our inherent diversity and ensuring every voice is championed; with a record number of women elected, and the most ethnically and racially diverse group of representatives, the freshman class of the 116th Congress is a testament to our Constitution.

Liberty– the preeminent value protected by our Constitution– guarantees all citizens the right to form their own opinions, to create their own raison d’etre, and to champion, or to elect someone to champion, their beliefs. It is why we have the benefit of being governed by a diverse Congress. And appropriately, it is their election– democracy in action– that sets the parameters and guarantees the protection, of the very liberty that gave us the ideas and design to elect them in the first place.

It is therefore ironic and paradoxical that the 116th Congress is slowly eroding the fabric of our democratic principles.

Earlier this month, House Minority Leader Congressman Kevin McCarthy of California made a statement urging House Democrats to take action against two Freshman Congresswomen, Rashida Tlaib of Michigan and Ilhan Omar of Minnesota, for their acerbic remarks against Israel, and Americans who support Israel. In a responsive tweet, Congresswoman Omar wrote “it’s all about the Benjamin’s baby”, insinuating that Jewish money is the foundation for Congressional support of Israel. When questioned about who she believes is paying American politicians for pro-Israel legislation and sentiment, she responded “AIPAC!”.

Only several days after apologizing for her incendiary claim that American support for Israel is fueled by financial support from Israel lobby groups, she told a congregation in D.C. “I want to talk about the political influence in this country that says it is O.K. to push for allegiance to a foreign country.” When challenged once again for this statement, she replied “I should not be expected to have allegiance/pledge support to a foreign country in order to serve my country in Congress or serve on committee.”

Each of these statements resurrects the centuries-old anti-Semitic tropes, among them that Jews employ mystic powers to dictate world affairs; that Jewish money influences world leaders; that Jews in the diaspora are apostates– unfaithful to their home country, with true allegiance only to Israel.

Omar is correct that democracy is built on debate. There is no more sacred right than the right to know, to speak, and to argue your moral conscience. And to curtail tyranny, we need faction challenging faction– this was Madison’s acumen, which led to the First Amendment. And effective governing is the convergence of these competing ideas, the tug-of-war of different beliefs, the push-and-pull of competing values, as negotiations ensue to create an innovate solution to our country’s problems.

However, there is a clear distinction between debating Israeli policy and US support for Israel on its merits and alleging that US politicians and policymakers support Israel because their allegiance was purchased, or that Jewish loyalty towards Israel comes at the expense of support for America. These allegations frustrate the sanctity of our Congress, the patriotism and commitment our elected officials have towards US interests and perpetuate hatred of the Jewish people.

We have elected a Congress that is the most diverse in American history, and because we are shaped by our milieu, our parliamentary diversity should yield rich policy debates and resolutions, debates that discuss the value of different spending bills, that evaluate and weigh the benefits of different education systems, and that consider foreign policy on its worth and not on arbitrary hatred for the “other”.

And it is precisely this arbitrary hatred that has been depriving our country of the ability to have a real discussion about Israel: about the shared values between Israel and the Democratic party– how Israel, alone, in the Middle East has an annual gay pride parade and women’s marches, a vibrant free press, and true accountability for elected officials, proven by their legal institution indicting a popular, sitting Prime Minister on corruption charges– about their emergence as a regional tech hub, and their profound contributions to agricultural, medical, pharmaceutical and scientific advancements.

Our country is fraught with a real crisis, and elected officials today are quick to espouse solutions to our current economic turmoil, our shrinking middle class, and the state of our job market. Yet, hate-speech, racial slurs, and anti-Semitic statements are riding the coattails of these political obstacles. Progressives have demonstrated their willingness to condemn racism in all its iterations when innuendos and accusations are levied by Republicans but waver when a member of their own ranks abuses fallacious anti-Semitic tropes.

Presidential hopeful Senator Warren commented that “We have a moral duty to combat hateful ideologies in our own country and around the world―and that includes both anti-Semitism and Islamophobia.” Her response is reminiscent of Donald Trump’s insistence that there were good people on both sides of the fight in Charlottesville. Islamophobia is undeniably an issue, but why is that a preventative factor in calling anti-Semitism when you see it?

More repugnant even than Warren’s tepid support in the Senate is the House Whip’s express support for Omar. “There are people who tell me, ‘Well, my parents are Holocaust survivors.’ ‘My parents did this.’ It’s more personal with her … I’ve talked to her, and I can tell you she is living through a lot of pain.” Fleeing persecution is not a carte blanche to discriminate against another minority groups, to traffic in anti-Semitic tropes, or to perpetuate microaggressions. Furthermore, Jim Clyburn’s assumption of the right to judge a person’s pain, to weigh the pain fueling one person’s narrative against a second’s, is not only flippant and arrogant: by minimizing the Holocaust, he reduces the “never again” policy to a cheap slogan and bankrupts his party of their respect for all individuals, all narratives, and all identities.

The inability to condemn hate when it is staring you in the eye will steer the Democratic party down a road towards condoning hate.  Our country was founded by groups of people who committed themselves to creating a state where groups and communities can cease being distrusted as the “other” and can unite in a quest to spread freedom. Ilhan Omar represents a district in Minnesota with a large Jewish community. She is in a unique position to form strong ties between the Muslim and Jewish communities she represents, to bridge this gap and prove that there is far more that unites us than divides us.

Liberty is a powerful force. Liberty boasts the value that humanity is about the right to think freely, to choose freely, and to govern freely. In America, we believe that being human endows us with this right. We sanctify the press when they get it right, but also when they get it wrong. We espouse the benefits behind religious freedom, and though we deliberate what freedom of speech really protects, we never contest that it is the cornerstone of our democratic institution and the fabric of our country.

More powerful than liberty is the institution protecting it. We have elected the most diverse Congress in American history. Its diversity, also, stems from the Democratic party. Yet this party sanctioned the spread of virulent vitriolic words. There was a time when Omar’s words would have garnered universal condemnation from both parties and from all communities. What a shame that this splendid diversity has yielded hatred.

Are we not presented with a novel opportunity never before seen in our Congress? We find ourselves at a pivotal juncture: we can unite or divide. We can allow our celebrated differences to produce a mistrust of people from different backgrounds. Or, we can breed strength in conviction. Let’s choose the latter.

As the country that passed a declaration preaching the value of life, liberty and the pursuit of happiness, we ought to feel emboldened to embrace the power of an ethnically rich cohort. We must remind Americans, and the world, that it is exclusively through our mixed backgrounds and distinct cultures, that we create the most profound, most alluring, most rich form of acceptance and liberty, because we are after all, “We the people”.