I am always on the lookout for images to add to the stock photo gallery my students and I have created to use in making short advocacy videos on behalf of real social justice claimants.  See “VLA Production Sine Qua Non: A DIY ‘Stock’ Image Gallery with a ‘Street Vibe’ (Docs&theLaw Blog, August 03, 2014) and “To Ask or Not to Ask? The Law, Ethics, & Etiquette of Capturing the Public for ‘DIY Stock’” (Docs&theLaw Blog, August 28, 2014).  Because we create the images in our gallery, we generally do not have to worry about copyrights and royalties when using them in our videos.

Generally, the gallery provides supplemental images to illustrate the legal stories we tell primarily through video interviews. Sometimes, however, the images are rich enough to tell a story by themselves alone. 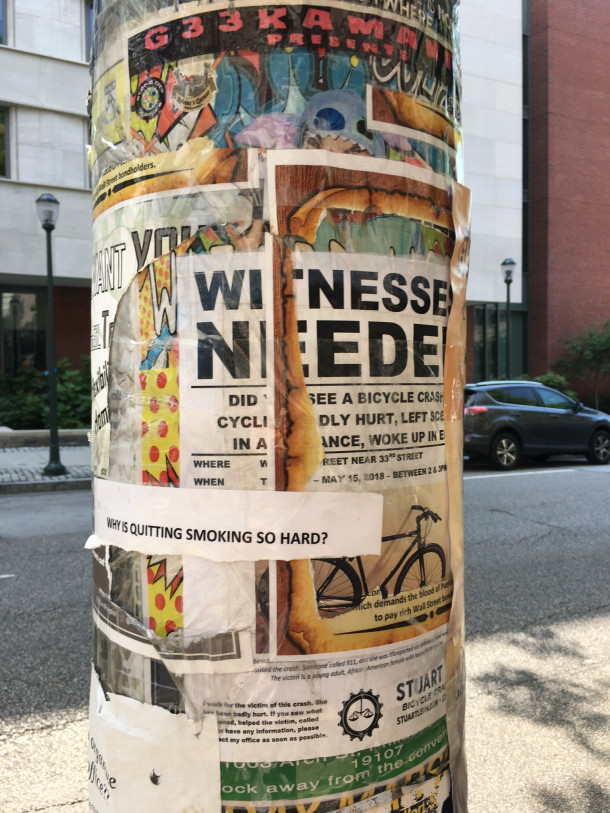 One Sunday this summer, as I crossed the street a block from my campus office, the headline of a poster taped on a traffic light pole caught my attention.  “Witnesses Needed,” it said.   I, of course, see the world through lawyer’s eyes.  Witnesses might be needed for a marriage ceremony or a will signing.  Actors playing witnesses might be needed for a mock trial.  In neighborhoods where the code of the streets condemns cooperating with the cops or “snitching,” one might expect to find pleas for witnesses needed on poles, walls, and fences, particularly for unsolved murders.  I doubted if any of these were the sort of witnesses the poster was soliciting.  So, I stopped, looked closer, and read as much of it as remained on the pole.

The photo of a bicycle was a clue as to the poster’s purpose.  According to the text, sometime in May or July (only the “y” remained; it turned out to be May 15th) 2018, between 2 and 3 pm, near 33rd and Walnut Streets on the Penn campus, a young black woman riding the pictured bike was involved in a crash.  “She suffered a severe concussion and doesn’t know what may have caused the crash.  Someone called 911 and she was transported via ambulance and woke up in the hospital.”  She suffered “heavy facial injuries.”  The poster requests that anyone who “saw what happened, helped the victim, called 911, or has any information” to call her lawyer. 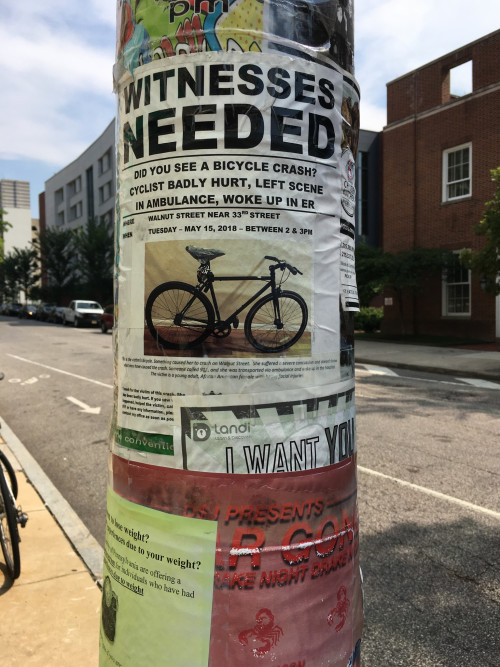 The next day I circled the block looking for more of the posters and found several in various states of completeness.  I wondered if they had been effective in turning up witnesses; I decided to call the woman’s lawyer.

Stuart Leon specializes in bicycle crash law.  His practice is limited to bike riders.  He uses “Witnesses Needed” posters quite often.  There are many hit-and-run accidents in Philadelphia involving bikers and cars.  The car drivers may “run” because they can or they may leave the scene of the accident without realizing that a crash has occurred.  Leon says that he has had “great results” from the posters, especially where there was high pedestrian or bike traffic at the time the collision occurred and repeat travelers on a daily or weekly basis thereafter.  The posters are a safe and non-intimidating “old school way” of finding witnesses.  He also employs posts on Facebook and Instagram.  I asked about surveillance footage from street cameras; according to Leon’s paralegal Dillon Mast, it is hard to get.  Attorney Leon says that “[i]t is uplifting how helpful people want to be.  They take the time to call.”  Leon considers the callers “citizen crime fighters” or “random heroes.”  The posters tap into a community of folks who share with the victims similar “on the road” experiences and the physical posters stimulate their desire to help. At the time I spoke with the victim’s lawyer, no one had come forward about the May 15th accident.   I hope that the victim is making a satisfactory recovery.

As a non-driving, non-bike-riding pedestrian who loves to walk, I encounter problems with both cars and bikes.  I stopped to read the poster, not because I was a fellow traveler, but because its headline (“Witnesses Needed”) transported me back to the time, four or so years ago, when I suggested that a group of students in my Visual Legal Advocacy Seminar take on the subject of “Being a Witness to Crime.”  It was an impossibly ambitious documentary project which they were unable to finish during the school year.  They did produce a solid 23-minute rough cut that provides an overview of the predicament of witnessing in an urban environment.

Being a witness to violent crime can be a very traumatic experience, especially if the witness was her or himself within the zone of physical danger when the crime occurred.  A significant amount of media attention has been devoted to “anti-snitching” witness intimidation by perpetrators, their friends, and family members and its adverse impact on the ability of the police and prosecutors to secure testimony to support arrests and convictions for crimes of violence. Reluctant or uncooperative witnesses, however, cite as an explanation for their conduct a distrust of the police whom they accuse of intimidation, coercion, and mistreatment.

Hardly anyone mentions the post-traumatic stress that can affect witnesses’ ability to remember and be credible, let alone cooperate.  Untreated trauma can turn physically and psychologically vulnerable witnesses into direct victims or perpetrators themselves.  Witnesses are also burdened by the social dynamics of cooperating with the authorities, as their decisions may impact their families, friends, neighbors, and community writ large.  The pressure to clam up may be especially great in cases involving violence within families, immigrant enclaves, and religious communities.  Finally, even in instances where there is no intimidation or heightened trauma, the decision of whether to involve one’s self in a criminal matter as a witness involves a contentious question of everyday morals.

Witnesses to violence need greater societal support.  Promoting public dialogues about the psychological ordeals of being a witness to violence and appropriate ways of coming to the aid of others while protecting one’s self might help individuals to deal with the predicaments of witnessing.  “If You See Something, Say Something” campaigns are teaching people when and how to respond to some threats of violence and danger.  The dialogue needs to be broadened.  There should be more resources for counseling, court escorts, and other tangible measures that recognize that witnesses to violence, particularly young people, are crime victims too.   “Witnesses Needed” could be read as a universal call for members of a caring community to step up and serve the cause of justice not only by coming forward as witnesses to the calamities befalling others, but also by fully acknowledging what witnessing entails.