Crying Political Conspiracy: Reflecting on Dr. Ford’s Treatment in the Wake of The #MeToo Movement 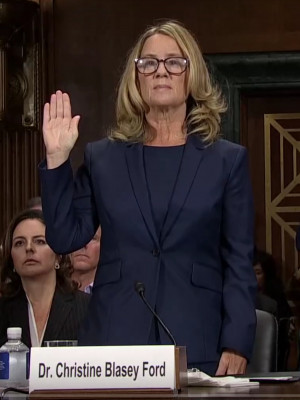 The #MeToo movement has made significant progress exposing the prevalence of sexual violence in today’s society, while also helping to dispel myths that prevent victims from speaking out against their abusers. The movement has gained more power than ever over the past year, holding once untouchable men, such as Harvey Weinstein, Bill Cosby, and Matt Lauer, accountable for their actions. #MeToo has also dismembered myths surrounding sexual assault and harassment, including the idea that such violence is unpreventable because “boys will be boys,” or that a woman is “asking for it” if she dresses or acts a certain way. However, even with such significant progress, the treatment of Dr. Christine Blasey Ford’s allegations of sexual assault against Supreme Court Nominee Judge Brett Kavanaugh show the steps that still must be taken before the country takes sexual violence seriously.

On September 27, 2018, Dr. Ford spent four hours testifying before the Senate Judiciary Committee about the summer night in 1982 when Judge Kavanaugh allegedly attacked her in the bedroom of a high school party while his friend, Mark Judge, looked on. One of the most powerful moments of Dr. Ford’s testimony was when she was asked to share her strongest memory of the assault. She instantly identified the “uproarious laughter” that came from Judge Kavanaugh and his friend Mark Judge as Judge Kavanaugh pinned her to the bed. “Indelible in the hippocampus is the laughter. The uproarious laughter between the two, and they’re having fun at my expense.” She said. “I was underneath one of them, while the two laughed. Two friends having a really good time with one another.” This memory highlights what to Dr. Ford was a traumatic event with life-long implications, but what was a joke to her attackers. For some of Judge Kavanaugh’s supporters, her experience and testimony are still a joke. President Trump made this clear as he publicly mocked Dr. Ford and her testimony at a political rally in Mississippi in early October.

Likely wanting to avoid the negative optics of having the all-male Committee Republicans, who comprise the Committee Majority, question Dr. Ford, Senate Republicans hired sex-crimes prosecutor Rachel Mitchell to question Dr. Ford. By asking questions through their “female assistant,” as Mitchell was dubbed by Senate Majority Leader Mitch McConnell, Committee Republicans were also able to separate themselves from Dr. Ford. By relying on Mitchell, they did not have to look her in the eye as she tearfully recounted the assault; and by relying on Mitchell, they were able to avoid the image of appearing to undermine Ford’s credibility by asking whether she could be mistaken about the identity of her attacker (to which she asserted no, she is “100% certain” it was Judge Kavanaugh).

As the hearing continued, it became clear Committee Republicans weren’t as concerned with keeping distance between themselves and Judge Kavanaugh. Ms. Mitchell was quickly abandoned once his questioning began, with Committee Republicans comfortable enough to address Judge Kavanaugh directly. But, rarely about the allegations. The most notable example was Senator Lindsey Graham, who became hysterical trying to support Judge Kavanaugh during his testimony. Turning red, Senator Graham screamed as he called the decision to hold a hearing for allegations of sexual assault against a candidate for a job that regularly decides the fate of millions of Americans, “the most unethical sham since I’ve been in politics.” He entirely avoided mentioning Dr. Ford’s name, instead opting to paint the allegations as a “political hit job” concocted by the Democrats against Judge Kavanaugh.

For me at least, the idea of crying ‘political conspiracy’ to attempt to discredit sexual assault allegations sounded oddly familiar. Last year, I nervously watched the Senate race between Republican candidate Roy Moore and Democratic candidate Doug Jones unfold in my deep-red home state of Alabama. Besides Moore’s already concerning pattern of defying federal law, resulting in his removal from the Alabama Supreme Court not once but twice, allegations that he molested and sexually assaulted teen girls while he was in his thirties came to light during the race. At first, Moore denied the allegations, and his base, including President Donald Trump, was content to take him at his word and vocally continued their support. However, as more corroborating evidence and witnesses came forward, it became harder to disbelieve the allegations. And ultimately, Doug Jones, a Democratic candidate, won by a little over 20,000 of the nearly 1.35 million votes cast.

The win was a historic victory considering a Democrat hadn’t held a Senate seat for Alabama in over twenty-five years, but the number of votes Moore received is still shocking. This is because the 650,000 or so individuals who voted for him either bought into Moore and his supporters’ proclamations that the allegations were a conspiracy by the left, who Moore described as including the “lesbian, gay, bisexual, transgendered who want to change our culture,” and “[the] socialists who want to change our way of life,” or they believed the allegations, but simply didn’t care. They did not care if their future Senator was a child molester as long as he was with their party.

There are some obvious differences between Moore and Judge Kavanaugh. Moore was in his thirties at the time he allegedly assaulted a fourteen and sixteen-year-old, whereas Judge Kavanaugh was seventeen to Dr. Ford’s fifteen. But, both Judge Kavanaugh and Moore’s supports reveal a disturbing trend of exploiting the polarized partisan climate to ignore sexual violence rather than look into the truth of allegations.

Is directing the conversation away from the allegations equivalent to presupposing the truth of Ford’s allegation? Or is this tactic of diversion more similar to debasing Ford’s character? Diversion, unfortunately, was a product of the latter: Republicans who argued that the confirmation vote should not be delayed for an investigation sent the same disappointing and alarming message as Moore’s 650,000 voters. “It won’t matter if the allegations are true” was the disappointing conclusion of the Senate hearings.

For many, myself included, the treatment of Dr. Ford, and the reaction to her allegations against Judge Kavanaugh was deeply disappointing. This is why it is more important than ever for women to continue sharing their stories and experiences. For proof, look no further than the way Senator Jeff Flake’s decision to unconditionally back Judge Kavanaugh changed after he was confronted by two survivors on his way to the committee vote. These two women, Ana Maria Archila and Maria Gallagher used their own stories of assault to shed light on the damage such a decision caused. Archila forced Flake to acknowledge her assault and demanded to know how she will explain the dismissal of Dr. Ford’s complaints to her children. Gallagher shared the true meaning of his decision to him. “I was sexually assaulted and nobody believed me,” she emphasized. “I didn’t tell anyone, and you’re telling all women that they don’t matter, that they should just stay quiet because if they tell you what happened to them, you’re going to ignore them. That’s what happened to me, and that’s what you’re telling all women in America.”

As it turns out, Archila and Gallagher were just two of the women motivated by Dr. Ford to speak out. Even Fox News Reporter Chris Wallace revealed Dr. Ford’s story motivated his own daughters to share with him their stories of the sexual assault and harassment they silently endured years ago in high school.  Although it is clear we still must take steps to ensure victims and allegations are taken seriously, stories such as these show women are being heard, and our experiences and voices will continue to matter.