“By Strengthening Others, We Strengthen Ourselves”: Welcoming President Berset, President of the Swiss Confederation to the University of Pennsylvania

As world leaders convene at the 73rd Session of the UN General Assembly (UNGA) in New York, the University of Pennsylvania Law School is honored to host President Alain Berset, President of the Swiss Confederation, on September 27th.

The overarching theme for UNGA’s 73rd session is: “Making the United Nations Relevant to All People: Global Leadership and Shared Responsibilities for Peaceful, Equitable and Sustainable Societies.”  At a time when changes in the liberal world order precipitate challenges and geopolitical upheavals, and instability is escalating tensions in global governance and international cooperation, President Berset’s philosophy is a much-needed counterbalance to some of the polarizing debates on the issues of multilateralism and the global order.

President Berset’s philosophy on social inclusion rests on the argument that strong multilateralism and a rules-based international order founded on fairness and respect strengthen democratic values and prosperity globally.  He has argued that:  “We can only tackle current challenges such as growing inequality, demographic change, migration, and their root causes by working together in a spirit of mutual trust.” President Berset has often harnessed the optimistic spirit of the post-World War decades and the founding of the Bretton Woods institutions in arguing that that “by strengthening others, we also strengthen ourselves.”

President Berset’s conversation on Democracy and Distrust: Threats to Democracy in the 21st Century explores the impact of fake news on democracy and examines pluralist notions of democracy as an antidote to fake news. 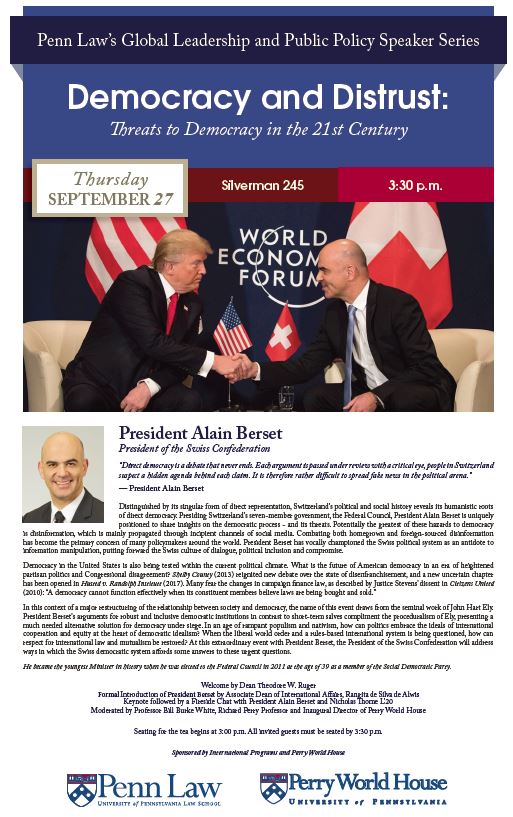