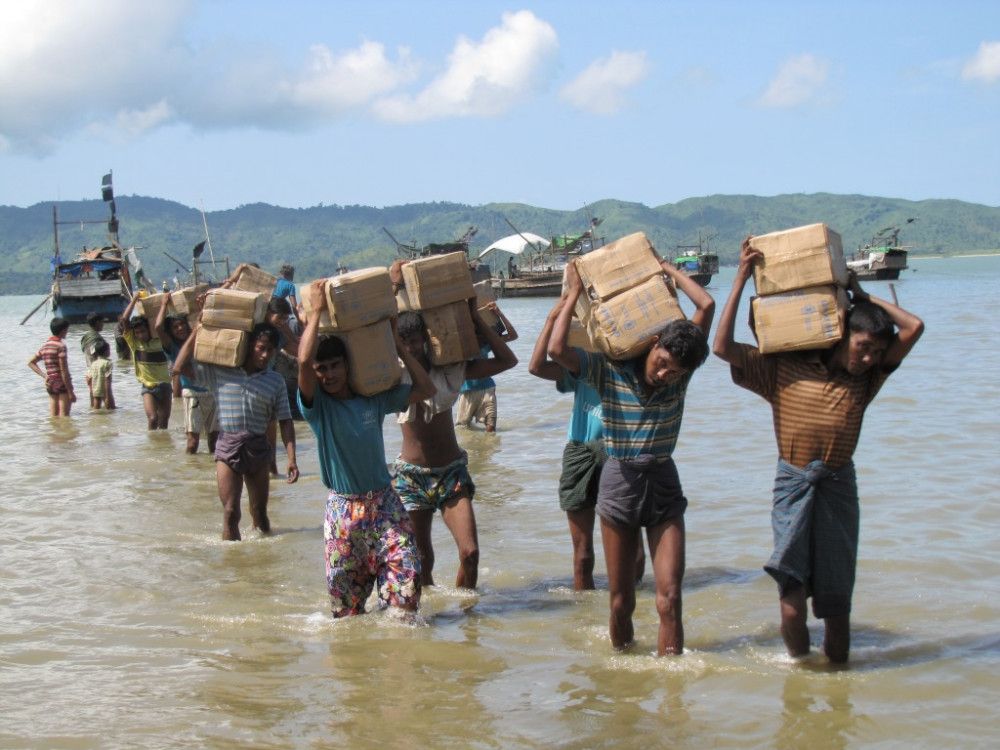 The United Nations (UN) has long characterized the Rohingya as the world’s most persecuted population. Historically, the Burmese viewed the ethnic and religious minority as illegal immigrants permitted entry by their former British colonizers. Such historical context informs contemporary views of the group as “foreigners.” And that has helped justify decades-long persecution by both private and public actors culminating in the Rohingya’s legal exclusion as citizens and other discrimination codified as law. Despite the group’s pre-colonial ancestral ties to the land, messaging that Rohingya are “outsiders,” “Bengalis” and even, “terrorists,” has helped the government justify mass atrocity crimes. The current humanitarian and human rights crises also implicate national security.

The Rohingya can trace their ancestral ties to Burma at least to the 12th century. But, they are widely seen as “outsiders” who benefitted from colonial governance. After claiming independence in 1948, Myanmar’s authorities viewed them as a threat to nationalist identity. And, that’s how they were treated.

In 1962, anti-Rohingya persecution worsened following a military coup when one-party rule commenced. During the next sixty (60) years, the army subjected the Rohingya to extra-judicial killings, torture and gender-based violence. Further atrocities compelled hundreds of thousands of Rohingya to seek refuge in neighboring Bangladesh in the 1970s, 1990s, and even much more recently.

Myanmar officials exploit such mass migrations as evidence of Rohingya status as “foreigners,” “migrants” and “Bengalis.” They refuse to acknowledge the root causes underlying flight.

In 1982, the Citizenship Act of Myanmar denied citizenship to the Rohingya, legally rendering them the world’s largest stateless population in violation of international human rights law. To be sure, Rohingya statelessness facilitates abuses – by both private and public actors – from no healthcare or educational opportunities to arbitrary detention and extra-judicial violence.

More recently, in August of 2015, Myanmar enacted the Protection of Race and Religion Laws, a series of four discriminatory measures. For instance, the Buddhist Women’s Special Marriage Bill undermines religious freedom by requiring Buddhist women to register interfaith marriages in advance; in the event of objections, presumably in the context of a relationship with a Rohingya man, the marriage is frustrated.  Additionally, in response to public concerns surrounding the “Islamicization” of Myanmar, the Religious Conversion Bill requires converts to secure prior approval from local authorities. UN international human rights experts denounced the discriminatory laws but they were enacted anyway.

Sadly, the Rohingya believed that Aung San Suu Kyi’s electoral victory in November of 2015 would translate into democratic reforms. However, anti-Rohingya persecution not only persists – it has worsened.

Since August of 2017, amid initial UN allegations of ethnic cleansing and now genocide, approximately 700,000 Rohingya have fled Myanmar seeking refuge in neighboring Bangladesh. The current humanitarian catastrophe ostensibly began with an assault on Burmese police posts by the Arakan Rohingya Salvation Army, a new insurgency group. Security forces launched a “counterterrorism” offensive, beheading men, raping women, murdering children and even more recently, razing villages.  Authorities also prevented humanitarian assistance – such as food, water, and medicine – from reaching victimized civilians.  According to data compiled by the ASEAN Parliamentarians for Human Rights (APHR), more than 43,000 Rohingya parents have disappeared and are presumed victims of the offensive.

In fact, in March, a UN expert stated that official atrocities “bear the hallmarks of genocide.”

The 1948 Convention on the Prevention and Punishment of the Crime of Genocide (“Genocide Convention”), which Myanmar ratified in 1956, defines genocide as an independent crime subject to investigation and prosecution by the International Criminal Court.   As a party to the treaty, Myanmar has an affirmative legal obligation to prevent genocide and punish those who commit it, including military authorities, government officials, and individuals. Article 2 defines genocide as:

According to international law, Myanmar is responsible for conduct that it effectively controls and directs.  The country’s military and government authorities are responsible for the atrocities against the Rohingya.  As such, Myanmar is criminally liable for their acts under the Convention particularly since the Rohingya Muslims qualify for legal protection as a distinct ethnic and religious group who enjoy a unique language, culture, and history.

Regarding genocidal intent, the recent escalation of state-sanctioned violence against the Rohingya is part of a larger pattern of persecution dating back at least to Burmese independence.  The Rohingya have since experienced mass expulsions, gender-based violence, arbitrary arrests, and unlawful detentions, among many other human rights abuses.

Additionally, for decades, systematic messaging depicting the Rohingya as “foreigners,” “illegal immigrants,” “Bengali” and “terrorists” created, reinforced and spread bias and prejudice nationally.  Such derogatory language dehumanizes the Rohingya, allowing officials to justify mass atrocities.  Significantly, genocidal intent may also be inferred from the scale and nature of abuses committed causing almost one million Rohingya to flee since last August; tens of thousands are dead.

In addition to massacring civilians in an alleged terrorism counter-offensive, security forces assaulted and tortured Rohingya inflicting both physical and psychological injury. The military sponsored a policy of mass rape against Rohingya women and girls. According to some reports, more than 40,000 births are imminent and many are evidence.  Such gender-based violence is connected to a false narrative that high fertility rates among the Rohingya pose an existential threat from Muslims to the majority Buddhist population.

Further, the military set Rohingya villages ablaze in an apparent attempt to prevent group members from returning to their homes. In fact, new evidence from Human Rights Watch and Amnesty International show that the government is actively building new bases where Rohingya homes once were.

Additionally, those who remain in Burma have little to no access to humanitarian assistance; many are in dire need of food and medical aid. In fact, Burma tops a list of countries where the ability of aid groups to reach people in need has worsened in the past six months. What’s more, lawmakers are currently considering legislation that would allow officials to monitor and block humanitarian interventions by aid groups, including the UN.

Regarding the imposition of measures intended to prevent births, the Rohingya have been subject to a “two-child rule,” requiring couples to swear in a signed statement that they will not have more than two children, for years.

Meanwhile, both ISIS and Al-Qaeda recruiters have been exploiting this worsening humanitarian and human rights crises. The crises will likely contribute to greater regional instability and have already animated extremist violence on our soil.

Like academics, advocates, and activists – as well as Turkey and France - it’s time that U.S. policymakers call this what it is: genocide. And, the current U.S. State Department fact-finding investigation will arguably help facilitate the shift in language from “ethnic cleansing.”

Moreover, as policymakers strategize about next steps, there’s an important point to remember. The most effective tool, the most effective strategy for achieving U.S. policy goals upholding the rule of law and protecting international religious freedom is recommitting ourselves to doing so at home.

We must protect the religious freedom of all Americans regardless of what they look like, how they worship or what they believe.  Only then will we regain the moral credibility to achieve positive change around the world.