Support and Advocacy For Individuals Returning From Incarceration 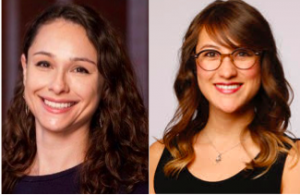 Sara Lynch (left) is a third-year student at Penn Law, and she is co-president of the Youth Advocacy Project. Sara seeks to partner with young people to dismantle harmful and unjust criminal justice practices through zealous legal advocacy.

Korin Okamura (right) is a first-year Penn SP2 MSW student specializing in Criminal Justice. She aspires to help people who are incarcerated break the cycle of recidivism through trauma-informed practice and policy advocacy.

Reentry and Tapping Into Talent

“[Our] most untapped potential is in the people who we discard. Some of the most impactful, intelligent people I’ve met are behind bars,” Roy Waterman explained to an audience of Penn Law and Social Policy and Practice students and practitioners in a panel discussion on Support and Advocacy for Individuals Returning From Incarceration.

Waterman knows about impact and success. He co-founded and directs the Drive Change Program, a New York non-profit with the mission of using the food truck workplace to run a one-year fellowship for young people returning home from jail or prison. And it is an award-winning business. Yet, Waterman also understands the challenges facing young people entering back into communities from incarceration. At nineteen years old, Waterman was sent to prison for 13 years.

As Waterman would tell you, reentry is not just about connecting people in need with critical resources, it is about our collective advancement as a democratic and humane society. It is about breaking down barriers so that people who were formerly incarcerated can fully realize their potential, pursue their interests and talents, and meaningfully contribute to their communities.

Finding the next best food truck entrepreneurs, directors of nationwide policy campaigns, esteemed public interest law fellows and impact litigators is part of reentry. Indeed, these achievements characterized each of the speakers who shared their experiences and expertise at the Youth Advocacy Project’s (YAP) panel conversation.

On January 16, 2018, Vidhi Sanghavi Joshi moderated this panel discussion, featuring Roy Waterman, Bill Cobb, Tarra Simmons and Shon Hopwood, on the topics of reentry and advocacy for an end to detrimental collateral consequences for individuals who have served their prison sentences, often in harsh and inhumane conditions, and are returning home. Despite variation in strategies to pursue social change, a resounding message was clear: “[a]ny movement must be driven by the people in closest proximity to the problem,” Bill Cobb shared. Cobb, who is now the deputy director of the Campaign For Justice within the ACLU, contended that “[o]ur world has mostly been advanced by those who have suffered. People advocating because their lives depend on it.”

“The Entire Package of Punishment”

For each of these speakers, the path to success has been riddled with roadblocks. Cobb recalled meeting Penn Law Professor Regina Austin, who was creating a documentary on the subject of reentry, to discuss his experience returning to Philadelphia after seven years in prison. Cobb described the difficulties he experienced in maintaining employment. As soon as employers found out he was formerly incarcerated, they let him go, regardless of the contribution he was making to the company. At Professor Austin’s urging, he connected with Sharon Dietrich at Community Legal Services (CLS) and began to challenge discriminatory hiring practices. Today, Cobb supports other people living with arrests and convictions.

Barriers to employment are just one of many punitive restrictions that persist after people have served their prison sentences. Shon Hopwood, an impact litigation attorney and Georgetown Law professor knows this struggle firsthand, given that he was incarcerated in a federal prison 19 years ago. “We measure justice in how long [people] go to prison,” Hopwood said. Yet punishment extends well beyond that. “We need to get prosecution and defense lawyers aware of collateral consequences. We have to get judges aware of the entire package of punishment. I would rather spend more years in prison to get rid of the collateral consequences.”

On a practical level, people living with arrests and convictions face barriers from the moment they are released from prison. Some prisons do not even provide car fare for people to leave the prison grounds, and other do not help people obtain identification cards necessary to obtain employment and stable housing.

The ripple effects of extended punishment through collateral consequences affect entire families as well. Tarra Simmons, a Skadden fellow at the Public Defender Association in Seattle, spoke to the effects in her life of having a criminal conviction, “I can’t even volunteer at my children’s school.” She added, “My family, for generations, has suffered in poverty and from substance abuse. My children are at risk.”

Parental involvement in school is critical to breaking the generational cycle of poverty and addiction that led to Simmons’s conviction and puts her children at risk. “I can’t rent from half the property companies in my county,” Simmons recounted. Beyond housing restrictions, there are about 45,000 collateral consequences affecting the lives people living with criminal convictions—from the inability to get business or life insurance to the inability to adopt a pet dog.

Not only must people overcome the practical difficulties that come with 45,000 collateral consequences, but they must also struggle with the trauma of being confined in prison. Waterman said, “If you’ve spent a day, ten years or just a day, in prison, you are scarred. You have experienced trauma.”

To make matters worse, many people who end up incarcerated also have histories of trauma and violence. “My cycle of abuse began in first grade when I was left back,” Waterman said, sharing the shame he felt as a child with no one to advocate for his educational needs. Yet, prison does not offer adequate support or mental health services. As Hopwood aptly pointed out, “[p]rison is not a place for personal growth.”

While the challenges in reentry are onerous, the potential solutions are numerous. But there is often disagreement about how to approach change. As one student attendee put it: “I could sense the tension in the room. It was a familiar, palpable uneasiness I’d been privy to before in my classes at the School of Social Policy and Practice. When a well-respected colleague publicly calls another to account for ethically-questionable conduct.” She described an exchange between Waterman, an activist and entrepreneur, and Hopwood, a reformer and litigator. Waterman wanted to know how Hopwood could stand to be in a room with, let alone work with, someone who called nations, home to mostly people of color, “s****hole countries.” Hopwood replied resolutely, “I will work with anyone who will make things better and that may require unusual companionship.” His unwavering commitment to helping his friends on the inside had brought him from prison through law school, and now to Capitol Hill.

What a strange, unfortunate reality we live in–one in which fighting for justice and advocating for the human rights can lead advocates into the halls of an administration that in so many ways represents the antithesis of such values. And yet, large-scale reform of any system often requires collaboration with strange bedfellows at as many levels as possible, both within the system and without. But collaboration does not mean complicity.

As direct service providers often playing the role of street-level bureaucrats, we must be careful not to compromise our core values or lose sight of our reason for doing the work that we do: the people we serve. “We have to unlearn using prisoner, offender, or even client. We have to use the language ‘people,’” Waterman emphasized, pointing out that negative, stigmatizing labels leads to dehumanization. It allows society to discard people, treat them cruelly, and it perpetuates mass incarceration.

For this reason, the team at the Youth Sentencing & Reentry Project (YSRP) and the affiliated UPenn student group, the Youth Advocacy Project (YAP) use the language “client-partnership” to describe the nature of our work with young people. A partnership more aptly describes the relationship between youth seeking legal advocacy and social work support and the teams that strive to learn from and support them.

When advocating for favorable sentences and connecting young people with community resources, YSRP follows the youth client-partner’s lead, rather than prescribing solutions without taking into account the strengths, goals, and needs of the young person involved in the criminal justice system.

Changing language is a practical and powerful starting point in promoting cultural transformation of thoughts and attitudes. However, we cannot stop there. As Cobb explained, there is a need for litigation, legislation, communication, and organizing; in other words, we all have a pivotal role to play, as professionals and individuals operating at different levels within our respective communities.

“We need an army to win and maintain those wins,” said Cobb. Shon Hopwood engages the problem by advocating for legislative reforms. Speaking of the recent, “progressive” ban-the-box legislation, Hopwood asserted, “We pass those laws and pat ourselves on the back but we are just kicking the can down the road. We should affirmatively go to companies and incentivize hiring people with a felony record.”

Bill Cobb recommends we change the way we respond to children who break the law: “We need to remove police officers from schools immediately.” Roy Waterman is a firm believer in not categorizing crime when we consider eliminating collateral consequences to convictions: “We have to speak to everyone incarcerated. We shouldn’t separate violent and non-violent. We need to stop alienating those who break the norms of society.” And for Tarra Simmons, the way forward involves bringing people together: “My heart is in organizing because I’m formerly incarcerated and my people are too. It’s healing too. Being in community with people heals my past trauma.”

For the Youth Advocacy Project (YAP), the solution involves training students from legal and social policy and practice backgrounds to partner with young people and present humanizing narratives to actors within the criminal justice system, as well as holistically support young people in achieving their goals upon reentry.

You can learn more about ways to get involved at the Youth Sentencing & Reentry Project website: https://ysrp.org/.