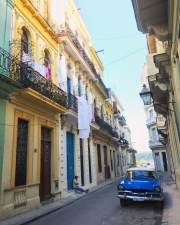 Walking around the colorful streets of Havana is a disorienting experience. The buildings are antique, worn, crumbling, and full of life. The streets are full of people, tourists and locals alike. You’re always in ear shot of music, live and recorded, which serves as a type of soundtrack for your wanderings. In many parts of the city, there is a noticeable lack of storefronts. If you need to buy something, good luck. Your only chance is to find someone who can direct you to the right place, and even then, you need to hope they have it in stock that day. Shortages are common; rations are prevalent. Cubans spend much of their time just trying to survive, trying to “resolver” their problems, which leads to a very creative atmosphere. As they say, necessity is the mother of invention, and Cubans are known for their creative attempts to compensate for a staggering lack of resources. All this to say, Cuba is different than any country I have visited, and it fascinates me.

Through a global research seminar at Penn Law, I was able to travel to Cuba for a week to speak to a variety of individuals about Cuba’s past, modern reforms, and future government without a Castro at the head. This is a crucial transition period for Cubans as they face the prospect of an increased role of the private sector domestically and await the implications of a Trump presidency on the previously thawing U.S. – Cuban relations. 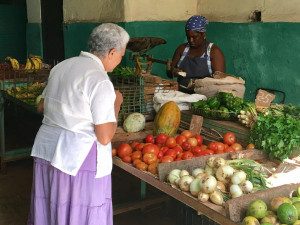 As an American, it can be easy to disassociate and minimize the human consequences of our foreign policy decisions. With isolationism on the rise, it is easier for many people to bury their heads in the sand, than to face the real effects of high-level policies. Cuba is a prime example. The effects of American policy touch every aspect of life on the island. Crippling sanctions contribute to shortages and poverty. In a desperate attempt to retain ideological power, the government counters with extreme restrictions on access to information and the Internet, further isolating Cubans from the outside world and allowing many Americans to live in blissful ignorance of the realities of life on the island. But things are changing, thanks to increased traffic and communication between the United States and Cuba.

I wondered when I arrived how the Cuban people would view me or treat me as an American. Would I represent the behemoth bully, the ever-present shadow? Fortunately I did not carry any of the stigma of my nationality. I did not encounter any anti-American sentiment while I was there, and in fact, I found the opposite to be true. The love for Miami permeates all. There was such excitement for President Obama’s visit, that the government felt compelled to quell it with an extra dose of anti-American propaganda after he returned home.

Overall, I left Cuba with an overwhelming sense of optimism. The connections between everyday Cubans and Americans are already so strong, and getting stronger everyday. I am confident that this relationship will continue to improve, regardless of political decisions taken on either side. This country is changing at a rapid pace, and I for one, cannot wait to return to Cuba.