Associate Dean of International Affairs at Penn Law. Previously, she was the inaugural director of the Women in Public Service Project incubated by Secretary Hillary Clinton.

When Hillary Clinton received the nomination as her party’s presidential candidate, she broke the glass ceiling for women around the world. In 1995, at the Fourth World Women’s Conference in Beijing, she insisted that “human rights are women’s rights, and women’s rights are human rights, once and for all.” Her words became the touchstone for a powerful global movement, and she became that movement’s icon. Twenty years later, in one of her first appearances after stepping down as Secretary of State, Clinton called women’s empowerment the “unfinished business of the 21st century.” She was right—despite increasing evidence that greater gender equality can enhance productivity, improve development outcomes, and impact the well-being of future generations, there is still a persistent, glaring dearth of women in decision-making positions at various levels worldwide. The Beijing Platform of Action, adopted by 185 states parties, clearly declares that: “Without the active participation of women and the incorporation of the perspective of women at all levels of decision-making, the goals for equality, development, and peace cannot be achieved.” Yet women lag behind in all areas of public and private life. Only one country, Rwanda, has achieved gender balance in parliament. Globally women earn 24 percent less than men. The UN estimates that at the current rate of progress, it will take 118 years to close the global gender pay gap. A recent Mackenzie Global study shows that if women enjoy equal opportunities with men, global GDP will rise 28 trillion. 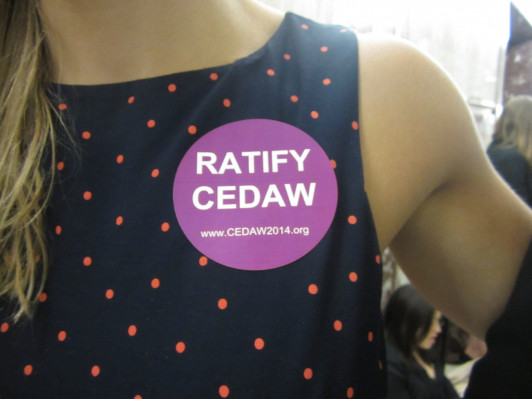 Women’s rights often take a back seat to the security agenda, and to economic and foreign policy goals. But the world’s problems cannot be solved until women achieve equality, and their human rights are integrated into every aspect of the global agenda. The United States has failed to ratify the most comprehensive and powerful international treaty protecting women’s rights— the Convention on the Elimination of all Forms of Discrimination Against Women (CEDAW)—harming U.S. credibility and holding back women worldwide.

David Rothkopf, the Editor of Foreign Policy has argued forcefully that “the underrepresentation of women in positions of power is proof not so much that men still dominate the top of the pyramid as it is of a system of the most egregious, widespread, pernicious, destructive pattern of human rights abuses in the history of civilization.” As he notes, no genocide against any people […] has produced more victims” than the number of women who have lost their lives to discrimination and violence. Whether it be the six million missing women, or inadequate healthcare and reproductive resources for women leading to preventable deaths, or the countless number of women who are raped, beaten, and murdered because of honor crimes—these human rights violations have cost more lives of women than any casualty in war. Rothkopf posits, “The systematic, persistent acceptance of women’s second class status is history’s greatest shame.”

At her confirmation hearings, when Clinton was asked to comment on the violence that women face because of their gender, she responded: “I want to pledge to you that as Secretary of State, I view these issues as central to our foreign policy. Not as adjunct or auxiliary, or in any way lesser than all of the other issues we have to confront.”  True to her words, during her tenure, in 2011, the United States National Action Plan on Women, Peace and Security, ushered in by President Obama’s Executive Order, entitled the U.S. government to accelerate, institutionalize, and better coordinate efforts to advance women’s participation in peace and security, and to protect women from sexual and gender-based violence.

Under Clinton’s leadership as Secretary of State, at the State Department’s Office of Global Women’s Issues, Melanna Verveer, the first-ever ambassador-at-large for international women’s issues, and her successor Catherine Russell strove to enshrine the rights of women and girls in the United States’ development and foreign policy strategies.

But more work must be done in order to ensure that these critical gains are not rolled back and that American foreign policy and America’s leadership role in the world continue to be strengthened by promoting women’s rights. Women’s rights defenders on the ground fear that their endeavors might be co-opted by national security agendas. The United States must be careful to further an important women’s rights foreign policy strategy based on human rights, in line with international human rights treaties which protect and advance women’s human rights. The most important way to overcome the charge of American exceptionalism is to ratify the Convention on the Elimination of All Forms of Discrimination Against Women (CEDAW) and the Convention on the Rights of the Child (CRC).

More than 20 years after Hillary Clinton reminded the world that women’s rights are human rights and more than 70 years after Eleanor Roosevelt led the drafting of the Universal Declaration of Human Rights, the United States remains conspicuously absent from the list of 185 countries that have ratified the CEDAW and the 191 countries that have ratified the CRC.

The CEDAW, adopted in 1979 by the UN General Assembly, is often described as the international bill of rights for women. It provides the rights framework for realizing equality between women and men through ensuring women’s equal access to, and equal opportunities in, political and public life— including the right to vote and to stand for election—as well as education, health, and employment.

Ratification of the CEDAW would give the United States far more legitimacy and credibility in the international community on women’s rights issues than it has now. The U.S. absence from the states parties to CEDAW undermines the critical principle that women’s rights are human rights; that they are universal and inalienable; and that they must be invoked in courts of law. The ratification of the CEDAW is long overdue and has hamstrung American credibility and foreign policy goals abroad.

As Harold Koh, former dean of Yale Law School and former Legal Adviser of the Department of State, has said, “America simply cannot be a world leader in guaranteeing progress for women’s human rights, whether in Afghanistan, in the United States, or around the world, unless it is also a party to the global women’s treaty.” Koh has stated unequivocally, “frankly, this is a national disgrace for a country that views itself as a world leader on human rights.”

The CEDAW is inextricably linked with the CRC. Girls’ and boys’ equality is the bedrock of gender equality. The CRC is the world’s most universally accepted framework for the protection of children’s and girls’ rights. It includes the child’s right to protection from discrimination based on his or her parent’s or legal guardian’s sex, race, religion, etc. This provision complements the CEDAW’s efforts to challenge gender-based discriminatory citizenship rights. The CEDAW read with the CRC also supports legal protections for girls and boys from child marriage. The CRC provides for universal access to girls’ education. It imposes safeguards that allow parents to take care of their children, including parental leave.

The CRC is a landmark agreement and the most ratified human rights treaty in history.  Only two UN member states have not ratified the CRC:  South Sudan, and the United States. South Sudan is in the process of ratifying the CRC.

U.S. non-ratification of the CRC has serious global implications. When we champion activists like Malala Yousafzai, and her clarion call for girls’ rights to education, we champion the rights enshrined in the CRC.  The refusal to ratify the CRC reveals an American exceptionalism which delegitimizes U.S. rhetoric on human rights.

U.S. non-ratification of the CEDAW and CRC is an impediment to effective U.S. foreign policy. It undermines the credibility of the U.S. efforts to engage as a global leader in advocating for women’s and children’s rights abroad, and it exacerbates anti-American sentiment among governments that violate women’s human rights with impunity.

Despite uneven gains in the area of rights protection, the CEDAW and CRC have proved impactful around the world.

In courts around the world, the CEDAW and CRC have been used to fill in gaps in national laws, to clarify ambiguities in the law and as persuasive authority. What this shows is that the CEDAW and CRC have impact beyond their normative force. Data by David L. Richards and Jilliene Haglund shows that eight years after a country ratifies the CEDAW, that country is 23 percent more likely to adopt full legal protections against domestic violence. Most importantly, these conventions are powerful organizing tools and have helped to galvanize attention around state accountability and due diligence in the protection of women’s and children’s rights.

In a time of unprecedented conflict and violent extremism, the CEDAW and CRC can help advance measures to counter violent extremism. For long, war and peace have been defined in terms of men who waged wars, signed peace treaties, and drafted constitutions. The women, who were disproportionately affected by war and strove to broker peace, still remain largely invisible in history. In General Recommendation 30, the Committee on the CEDAW affirmed the synergy between the CEDAW and the Women, Peace, and Security agenda contained within the relevant Security Council resolutions.

Even though evidence shows that critical security issues are often highlighted when women are at the peace negotiating table, a review of the peace processes taking place between 1992 and 2010 shows that female representation was as low as 2.5 percent of signatories and 7.6 percent of the negotiating parties.  Women are also often excluded in post-conflict efforts to rebuild, despite the passage of landmark UN Security Council Resolution 1325.  When women have a role in peace processes, issues like support to victims of violence during conflict, access to land, health, and education—all of which disproportionately affect women—are addressed in peace treaties.  Marking the 15-year anniversary of UNSCR 1325, Resolution 2242 strengthened a number of 1325’s substantive areas, and called for the integration of a gender analysis into the study of drivers and impacts of violent extremism.

The 2015 Report of the Secretary-General on Conflict-Related Sexual Violence recognized that in addition to being employed as a weapon of war sexual violence can also constitute a tactic of terror. Security Council Resolution 1820 reiterates this assertion. Accordingly, efforts to prevent and address sexual violence should be closely and strategically aligned with efforts to prevent violence extremism.

The 2016 UN Secretary General Plan of Action on Human Rights and Terrorism also highlights gender discrimination as one determinant of violent extremism.  The correlative of this finding is that the protection and empowerment of women is central to countering violent extremism.

The recent UN Global Study on Women, Peace, and Security has found that “across religions and regions, a common thread shared by extremist groups is that in each and every instance, their advance has been coupled with attacks on the rights of women and girls—rights to education, to public life, and to decision-making over their own bodies.” Gender inequality and violence against women and girls is an overarching trend in every violent extremist group’s agenda.

Many recent conflicts have been marked by the pervasive targeting of women. The tactics of ISIS and Boko Haram show how extremist groups use attacks against girls and women’s education as a tool of terror and as a method of recruitment. The systematic sexual assault of women and girls by combatants has become a tool of war and a tactic of terror. Security Council resolutions provide legitimacy on the ground and are important standard-setting international norms, but they still are not an end in themselves. Unless U.S. foreign policy takes the lead, these resolutions will remain words on paper. There has never been a more important time for the United States to ratify the CEDAW and CRC and send a powerful message to both our allies and enemies that “women’s rights are human rights, once and for all.”