The Catalyst Fellowship program provides a year of support for Penn Law graduates who work with government, non-profit, or international agencies focused on public service. With funding from the Catalyst Fellowships, graduates can take unpaid positions at government organizations and nonprofits that would not ordinarily have the funds to hire them. Through the program, they gain valuable professional experience and deliver exceptional service to organizations that frequently hire them as full-time lawyers when the grant year ends, or as soon as funding becomes available.

“Our Catalyst Fellows have been an exceptional success story,” said Arlene Rivera Finkelstein, Associate Dean for Public Interest Programs and Executive Director of the Toll Public Interest Center. “They bring passion and drive to their placements, and quickly demonstrate that they are skilled, committed public interest lawyers — the kind of lawyers that can have a tremendous impact on the causes and communities they have chosen to serve. It is no surprise that our Catalyst Fellows have all successfully utilized the fellowships as launching pads for impactful public sector careers, with their partner organizations or in other organizations doing similar work.”

Frawley spent her Catalyst Fellowship as an assistant public defender at the Mecklenburg County Public Defender’s Office in North Carolina, where she represented clients facing misdemeanor charges. Frawley grew up in West Virginia, and she said that she saw a lot of the problems with indigent representation in rural areas. She joined the Mecklenburg Public Defender’s Office through Gideon’s Promise, a training program and support network for new public defenders, specifically focusing on underserved parts of the country.

Frawley was in court every day, and had between five and seven cases each session — “double digits worth of cases each day,” she noted. She made on-the-spot decisions in each case for whether or not a client’s case was good for trial, then advised them accordingly. Often, going to court was the first time she saw her client.

Now that her fellowship is complete, she is continuing on as an assistant public defender at the Mecklenburg County Public Defender’s Office. “The Catalyst Fellowship let me start my job sooner, essentially,” she said. 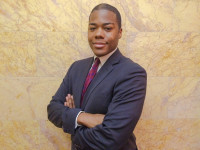 Lambright was a Catalyst Fellow at the AARP Foundation Litigation, which works on amicus briefs at the federal and state court level and serves as co-counsel on federal class action suits relating to age discrimination and disability discrimination. During his time, he drafted two briefs, one to the Kentucky Supreme Court and the other to Maine Supreme Court. He also worked to prepare litigation for a class action suit, including trial prep and legal research.

At Penn Law, Lambright did an externship at the Capital Habeas Unit of the Federal Community Defender for the Eastern District of Pennsylvania, which does appellate work representing prisoners on death row. There, his interest with criminal law was combined with the “puzzle-solving” aspect of appellate work that he gravitated toward.

Lambright said he wanted to work somewhere that he could “be serving vulnerable populations,” and at the AARP Foundation Litigation, he was able to learn from people who have been litigating at a very high level for many years.

After gaining appellate experience with the AARP Foundation Litigation, Lambright has taken a position as a staff attorney for the Office of the Appellate Defender in New York, which works on direct appeals and post-conviction hearings for individuals convicted of crimes in Manhattan and the Bronx.

Schulman was a Catalyst Fellow at the Committee for Public Counsel Services in Boston, which is the Massachusetts statewide public defender office. She worked in the Children and Family Law Division, where she was appointed to represent either parents or children in juvenile court cases in which the state is intervening, making allegations of abuse or neglect, and asking the court for custody of the children. In addition to representing clients in court, she managed all other responsibilities of staff attorneys including communicating with clients between court dates, drafting motions, visiting clients, attending foster care review meetings, and meeting with court investigators.

Before coming to Penn Law, she participated in Teach for America and taught for four years in an elementary school in the Bronx. She came to Penn Law as a Toll Public Interest Scholar and knew she wanted to represent children and families in court.  Throughout law school, she gained valuable experience in that field participating in the Interdisciplinary Child Advocacy Clinic, and working for three years with the Custody and Support Assistance Clinic, a pro bono student project.

With her fellowship complete, Schulman now works as a full-time staff attorney at the Committee for Public Counsel Services.