“Last Day of Freedom”: Bill Babbitt’s Struggle with the Stigma of Being the Brother of a Murderer

“Oh, God!  What will my neighbors think?  Will they think

that I’m a bad person, that we are bad people?

What will my mother think? Would she understand that I

had to do what I did?

What will Manny think?” 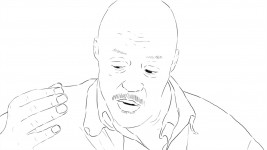 ”Last Day of Freedom” is one of the films vying for this year’s Academy Award for best documentary short.  It was produced and directed by Dee Hibbert-Jones and Nomi Talisman and is available on Netflix.  The film provides a rich text for exploring and understanding the shame, guilt, regret, and feelings of injustice that can haunt the relatives of those who commit homicides.

The title refers to the day in 1980 when the Sacramento police arrested Bill Babbitt’s brother Manuel Pena Babbitt (known as “Manny”) for the murder of 78-year-old Leah Schendel, an arrest that Bill was instrumental in bringing about.  In his own words, as supplemented by what Hibbert-Jones and Talisman describe as “images expressive of his [and Manny’s] mental state[s]”, Bill recounts how he figured out that Manny was responsible for the Schendel homicide, went to the police, and finally aided in Manny’s capture.  Bill wanted to get help for his brother, a Marine Corps veteran who suffered from inadequately treated paranoid schizophrenia and PTSD.  Bill never expected that Manny would receive the death penalty, but Manny did.  Bill thought that Manny would ultimately be saved from a lethal injection by the legal appeals of his new lawyers and the advocacy of supporters like David Kaczynski, brother of David, and fellow Vietnam veterans, but Manny was not spared. After nearly 20 years in prison, Governor Grey Davis, a former Vietnam vet himself, rejected his plea for clemency.  Manny was executed on May 4, 1999, the day after his 50th birthday.

“Last Day of Freedom” is the story of Bill’s mental anguish over the role he played in the crimes, incarceration, and execution of his younger sibling.    Bill’s story confirms research findings that the stigma or mark of disgrace associated with being a murderer is contagious.  (See Hazel May’s article “Murderers’ Relatives” and my “The Shame of It All”.)  Even innocent children are not insulated from it.  It rubs off on the killer’s family members, who suffer a loss of self-worth and self-esteem, because society blames the families of killers for their crimes and, knowing and anticipating that, the family members also blame themselves.   Thus, Bill faults himself for not preventing Manny’s crimes by watching him more closely.  Bill worries about what the neighbors will think.  He is troubled that the prosecution makes him out to be an insincere bad guy at Manny’s trial. 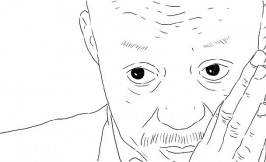 Bill’s emotions are compounded by the sense of betrayal he feels for the role he played in Manny’s case.  Bill recognized that cooperation with the police might not be in Manny’s best interests.  Still, Bill realizes that he has little choice but to tell the authorities what he knows.  He does not want his brother to hurt anyone else.  Bill is buoyed by the seemingly sympathetic treatment of the “good cops” with whom he deals and their assurance that Manny would not be charged with a capital offense.  Bill is thus devastated when his faith in law enforcement and the criminal justice system is crushed by the district attorney who takes the political path of seeking the death penalty and the defense lawyer who appears in court under the influence and has no qualms about telling Bill that he does not trust “n*****s” to serve on Manny’s jury. Should the brother of Manny Babbitt have expected better?

Manny Babbitt’s entire life was characterized by multiple institutional failures.  (My knowledge of the details of Manny’s history comes from not only “The Last Day of Freedom,” but also “The Clemency Video of Manny Babbitt,” which was produced and directed by Michael Hirsh, with the cooperation of one of Manny’s lawyers, Charles E. Patterson.)  Bill and Manny Babbitt were the offspring of poor black immigrants from Cape Verde, an island nation off the coast of West Africa.  Manny suffered a traumatic brain injury in an auto accident at age 12, joined the Marines though he could barely read and write, served two tours of duty in Nam, suffered a shrapnel wound to the brain during the Battle of Khe Sanh (he received his Purple Heart while on death row), was hospitalized at the notorious Bridgewater State Hospital for the criminally insane in Massachusetts (remember “Titicut Follies”), and wound up homeless and living on the streets of Providence, Rhode Island.  Add, then, to the shame and guilt Bill seemingly felt, anger over the many injustices Manny experienced along the way to being convicted and executed for murder.

Researchers have examined the various strategies relatives of those who have committed murder adopt to cope with the emotional pain of the stigma.   Avoidance of interactions where it might come into play and suppression of the connection to the criminal are among them.  Bill describes how, after witnessing Manny’s execution, he avoided his family members who were waiting at the prison gate and went off with his wife to the ocean at Half Moon Bay.  Similarly, his family members do not talk about Manny: “It’s like Manny never existed.”

It is unfair that the family members of those who commit murder should be adjudged guilty by association and silenced when they might make valuable contributions to debates over the failure of the institutions that adversely impacted their loved ones’ lives.  Ever wedded to the mythology of individual accountability for crime and families’ responsibility for the conditions of their being, society stigmatizes killers and their kin as a way of deflecting attention away from the fact that ours is a culture that spews systemic violence, thrives on high homicide rates, and preserves the death penalty.

Bill Babbitt, however, has found a measure of solace and salvation through being outspoken in affirming his relationship with Manny and engaging in political activism and advocacy around the death penalty, the inadequacy of treatment for mental illness, including the psychic wounds of those who have served this country in the military, and racial inequities in the criminal justice system. 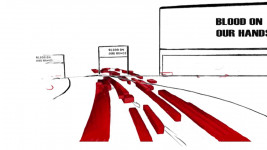 Bill Babbitt pours his emotions into the story he tells in “Last Day of Freedom,” while filmmakers Dee Hibbert-Jones and Nomi Talisman register his feelings –with mostly black lines on white backgrounds – better and no doubt more accurately than a polygraph.  Be assured that this essay could have extracted further insights from this film.  Does it adequately deal with the issue of race?  Do the black-on-white drawings elide the salience of “color” in the lives of Bill and Manny?  What should be made of Bill’s thoughts when he saw the victim’s family at the execution (“Yes, they were victims.  They had a terrible loss, but we’re all partners in this experiment.  We all got blood on our hands now”)?  In poor urban communities where the perpetrators and victims often appear to be interchangeable, do the survivors of those who kill and those who are killed bear a similar burden of societal disdain?  “Last Day of Freedom” has much more to tell us about the stigma that can haunt the relative of a person convicted and executed for murder.