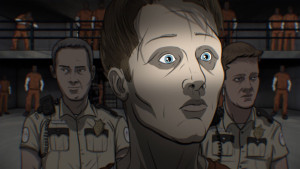 A still from Gabriel London's documentary, "The Life and Mind of Mark DeFriest."By Tom Isler

When U.S. District Judge Mark Wolf agreed to moderate a panel discussion about The Life and Mind of Mark DeFriest, a documentary film about a mentally ill man who was sentenced to life in prison, he never could have guessed that the FBI, the IRS, the U.S. Attorney’s Office, and the Massachusetts State Police would launch an investigation to determine if he had compromised his ability to preside over a federal death penalty case pending in his court.

But that’s exactly what happened.

The investigation, coordinated by the prosecution in the Massachusetts death penalty case United States v. Sampson, spanned several weeks this past summer and concerned whether reasonable people could question Judge Wolf’s impartiality based on his involvement in the film screening and the panel discussion.  The problem?  One of the panelists, whom Judge Wolf had hosted for dinner before the screening and praised during the panel discussion, had submitted an affidavit in support of Sampson a few years back—a fact that Judge Wolf didn’t realize at the time of the screening—and later was named as a possible witness for the upcoming sentencing phase of the trial.  Also, Sampson was planning to introduce evidence at that trial that he was mentally ill and had suffered abuse in prison, like DeFriest.

Although Judge Wolf did not express his own opinions on these topics at the screening, the government contended that Judge Wolf’s relationship with the witness and his special interest in mentally ill prisoners and violence in prisons would cause people to question his impartiality in the Sampson case.

Judge Wolf disagreed, and denied the government’s motion for recusal.  In a long opinion published in September, Judge Wolf explained that casual contact with the panelist or promotion of a documentary about an entirely different criminal case in a different jurisdiction (Judge Wolf presided in the District of Massachusetts; DeFriest was convicted in Florida), did not warrant his removal from the Sampson case.  The matter was finally resolved this week when the government announced that it will not appeal Judge Wolf’s decision.

While nothing ultimately came of the recusal motion, the incident may make other judges hesitant to promote documentary films, or participate in film panel discussions, either as moderators or panelists, so as to avoid any questions about impartiality—and the resulting headaches.

In 2003, Gary Sampson pleaded guilty to carjacking and murdering three people, and a jury sentenced him to death.  Seven years later, Judge Wolf vacated the death sentence after discovering that a juror had repeatedly lied under oath during the juror selection process and would not have been qualified to serve on the jury if she had told the truth.  The U.S. Court of Appeals for the First Circuit affirmed Judge Wolf’s ruling.

A retrial on sentencing was on the horizon when, in 2014, Judge Wolf and his wife met up with family friends and their son, Gabriel London, director of the DeFriest documentary.  Judge Wolf, who had contributed $50 to London’s Kickstarter campaign for the documentary in 2011, told London that if London could organize a screening of the film to coincide with the Judge’s vacation on Martha’s Vineyard, he would ask Harvard Law School professors Alan Dershowitz and Charles Ogletree to attend and participate in a panel discussion about the film.  London immediately started making the arrangements.

When Ogletree proved unavailable, London suggested that another family friend, Dr. James Gilligan, fill in.  Gilligan was a psychiatrist with a particular interest in criminal justice and frequently served as an expert witness on mental health and incarceration issues.  Judge Wolf agreed, without realizing that Gilligan had submitted an affidavit in support of Sampson’s habeas corpus petition in 2010.  (The affidavit was part of 1,100 pages of exhibits to a 252-page habeas petition, and Judge Wolf never cited or relied upon the affidavit in his resulting opinion.)

Judge Wolf contacted a local newspaper about the screening, and the paper ran a story about London and the film, and printed a photo of Judge Wolf.  Before the event, Judge Wolf and his wife hosted London, Dershowitz and Gilligan for a courtesy supper at their vacation rental home.  The Sampson trial never came up in conversation at dinner, nor was it mentioned in the film or in the discussion following the screening.  Judge Wolf never expressed opinions about the film or the mental health or incarceration issues it raised, and told the audience that he did not agree with everything that Dershowitz and Gilligan said during their discussion.  Judge Wolf ended the program by thanking the panelists and calling them “literally, like the two world’s leading experts on this issue.”

Nearly a year later, in June 2015, Judge Wolf learned for the first time that Sampson might call Gilligan as a witness in his sentencing retrial, and alerted the parties about the previous summer’s screening.  Although everyone involved in the case agreed that Judge Wolf was not actually biased based on his prior contact with Gilligan, and therefore his recusal was not mandatory under federal law, the government requested an opportunity to conduct an investigation to determine whether Judge Wolf should recuse himself under 28 U.S.C. § 455(a), which requires a judge to disqualify him- or herself in any case in which his or her impartiality might reasonably be questioned.

Judge Wolf permitted the investigation but denied the government’s subsequent recusal motion.  “The film makes no reference to Sampson,” Judge Wolf wrote.  “The issues discussed in the film and by the panel are related to Sampson’s case only at a high level of generality.  I acted only as a moderator of the panel.  I repeatedly stated that I was not expressing my own opinions on DeFriest, or any case or subject, and that I did not agree with everything the panelists said.  In light of these facts, a reasonable person could not question my impartiality because I organized, promoted, and moderated the panel.”  See United States v. Sampson, — F. Supp. 3d —, No. 01-cr-10384-MLW, 2015 WL 5257123, at *4 (D. Mass. Sept. 8, 2015).

In addition, Judge Wolf noted, Gilligan had not been retained to testify at the retrial at the time of the screening.  And although Judge Wolf was now acquainted with Gillian, the two “are not friends,” and “ordinarily even a judge’s friendship with a prospective witness does not require a judge’s recusal under §455(a).”  His comment about Gilligan being a leading expert was “the sort of generous hyperbole common to moderators on similar occasions.”  In any event, a jury would decide what weight to give the testimony at trial.

Judge Wolf observed that he was actually friends with one of the prosecutors in the Sampson case, and the government did not suggest that Judge Wolf recuse himself on those grounds until after he vacated the death sentence and the First Circuit affirmed.  (Judge Wolf didn’t recuse.  See United States v. Sampson, 12 F. Supp. 3d 203, 212 (D. Mass. 2014).)  Recusal should not be used, or appear to be used, as a mechanism for shopping for a judge more sympathetic or favorable to one’s position, he warned.

Judge Wolf offered a few comments about documentary films and film screenings.  “Judges are encouraged to engage in activities to educate the public on issues relating to the administration of justice as long as those endeavors do not interfere with their duty to be, and reasonably appear to be, impartial,” he wrote.  “[T]he program on the DeFriest film is the type of activity in which the Code of Conduct encourages judges to engage.”  Merely watching the DeFriest film was no grounds for recusal, he added.

Judge Wolf gave the government a month to decide if they would appeal the decision.  Instead of appealing, the government moved for reconsideration, which Judge Wolf denied.  On Monday, the prosecution said it would not pursue an appeal.

This incident probably won’t teach judges any lessons they didn’t already know.  Federal judges tend to be reserved in their comments to the media or the public, and are careful not to wade into controversial topics (with notable exceptions, such as Judge Alex Kozinski, of the Ninth Circuit, who told “60 Minutes”  that maybe states should bring back firing squads).

But the process obviously took a toll on Judge Wolf.  “More than two months have now been devoted to the government’s investigation, the parties’ briefing, and my deciding the government’s motion for my recusal, rather than to resolving the many other pretrial issues that were on the agenda,” he wrote back in September, not knowing that the controversy would last through December.

And the government’s case for recusal was weak.  Sure, the film touched on some general issues that might be background in Sampson’s case, but Judge Wolf didn’t express his views on the subject, and qualified his appearance by saying that he was not commenting on substantive issues or cases.  His limited contact with Gilligan was never going to be sufficient grounds for recusal, given the minor role Gilligan might have played in the Sampson case.  If the government could cause such headaches for a judge in these circumstances, what other seemingly innocuous appearances might they investigate?

It’s hard to imagine Judge Wolf volunteering to speak at another documentary screening anytime soon.  It’s also hard to imagine that the DeFriest incident, the investigation, and the delay in the trial schedule wouldn’t make some judges hesitate to promote another documentary in a similar manner, particularly a film that served an advocacy purpose or concerned issues that commonly arise in the judge’s courtroom.

Although civic-minded judges may be inclined to bring attention to law-genre documentaries, and to educate the public about the justice system, the DeFriest incident may convince them that it’s not worth the trouble.  And that would be a lost opportunity for the judiciary to engage with the public on issues of significant interest and concern, and for law-genre documentarians to promote their work.