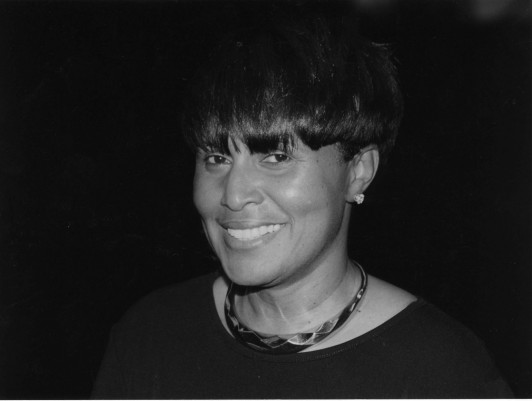 Having focused in my last post on “Evolution of a Criminal,” a documentary that relates to black men with a criminal background, I racked my brain to come up with a film that addressed the experiences of young black women who have increasingly become involved with the law.   Then I thought of “Justice for Her,” which was produced and directed by Aginah Carter-Shabazz.

Aginah is not a trained or professional filmmaker.  She is a black mother and grandmother, a hairdresser, and an internet entrepreneur.  Yet, in 2008 she released a nonfiction video that recounts her struggle to secure the freedom of her daughter, Nas, who was tried for capital murder in 1999.  The charge was a consequence of the mother and the daughter’s involvement in intimate relationships with black men who engaged in criminal conduct.  After 18 months in jail and a month-long trial, the daughter and her co-defendants were acquitted by a jury.

To be frank, the production quality of “Justice for Her” is poor, but the narrative is rich.  Furthermore, the insights regarding the impact of black women’s involvement with the criminal justice system during the heyday of the “War on Drugs” are deep.  Perhaps I should have used “vernacular” instead of “amateur” in my description of “Justice for Her.” “Vernacular” is a term applied to “self-taught,” “folk,” or “outsider” art that is not created within a mainstream institutional context.  “Justice for Her” could be so labeled because it represents the creative deployment of digital visual technology by a ”self-taught” middle-aged black woman whose self-financed visual work deploys a perspective, aesthetic, and language shared by black women.  In addition, it is distributed directly to black audiences through sales over the Internet and screenings in black venues.  The video and the companion book Choicez are available at http://www.aginah.com/film.html.

“Justice for Her” is a response to the vacuity of music videos, male-focused black gangster/gangsta nonfiction films, and titillating female-focused black street lit(erature).  It expands beyond these genres by telling the story of women in a real black family in crisis.

Following the birth of her daughter and the end of her first marriage, Aginah became the common law wife of Malik, a man who “associated with heroin dealers.”  At the time, Black Nationalism was strong even among the criminals who were decimating black communities with their lethal drugs.  Aginah says that Malik provided her with nice clothes, a nice home, and nice cars.  She admits that she was probably naïve about where the money to buy these things came from.

On Easter Sunday 1972, Aginah and Malik attended an affair at Club Harlem, an Atlantic City night club.  Malik was shot and died nine days later.  Aginah, who was sitting next to Malik, was uninjured.  The target of this Easter Sunday Massacre, which is part of the history and lore of Philadelphia’s so-called “Black Mafia,” was a major Philadelphia heroin dealer who was known as “Mr. Millionaire.”  Malik was his friend and bodyguard.

After Malik died, Aginah’s relationships with men went from bad to worse.  Her third husband, a member of the Nation of Islam, took to freebasing cocaine and protecting numbers bankers.  She did not have to divorce him because he was still married to his first wife.  Her last husband was a handsome younger man who physically abused her. He was a professional jewel thief.  She gave up on him after he tried to involve her in a scheme to steal a fur coat from Saks Fifth Avenue’s flagship store in New York City.  All toll, Aginah had four husbands, three wedding ceremonies, and two divorces.

In the meantime, Nas, Aginah’s daughter, was coming of age.  Nas is broadly condemned by interviewees in “Justice for Her” for her profligate spending and acquisitiveness.  Nas, however, defends herself by saying that she was merely imitating her mother and pursuing the only lifestyle she knew.  She wanted to have money, clothes, jewelry, and cars just like her mother had.   Nas married a drug dealer who fathered her two of her three children and physically abused her.  He was ultimately convicted of rape and murder and sentenced to life in prison.  She got much of what she wanted from boyfriend Darryl Coleman, but there were other complications, including an incident where he confined her against her will in his home.

On the night of April 2, 1994, a drug dealer by the name of Randy Slade was murdered in front of Nas’s house.  Coleman was caught fleeing the scene.  He pled guilty to the murder and was sentenced to life. He was already serving a life term for a federal drug trafficking conviction that resulted from a trial at which Nas refused to testify as a witness for the government.  Coleman subsequently withdrew his guilty plea and implicated Nas in the murder.  She went on trial with him and a Detroit gang member.

While Nas was detained in a Philadelphia jail awaiting trial, Aginah had to take care of her three grandchildren (one of whom the school tried to place in special education classes), run her businesses, hire and consult with Nas’s privately-obtained attorney and investigator, raise money for Nas’s defense (via dances, cake sales, and raffles), and provide psychological support for a daughter sitting in jail, facing the death penalty, and begging her mother to do something.

The trial was a harrowing experience for the family.  The state relied on the testimony of a Detroit-based hit man who was unfamiliar with any of the locations where he supposedly met Nas.  It so falsely attempted to attribute statements made during a wiretapped conversation captured in connection with a codefendant’s drug trafficking to Nas. Ultimately, Nas was acquitted. 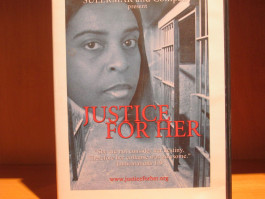 Aginah’s documentary represents a kind of intergenerational intervention or disruption in the narrative that the girlfriends of crack dealers were solely to blame for believing that they could possess their way to a good life through involvement with criminals without suffering significant consequences. Instead of seeing these young women, often called   “hoochies,” “chickenheads,” and “skeezas” in slang parlance, as springing from whole cloth, “Justice for Her” forces the viewer to look at them as part of an historical continuum in which they are linked to an earlier wave of black criminality that involved heroin distribution and racketeering during the 1970s and early 1980s.

The video lends credence to the theory that the behavior of women like Aginah and Nas reflects a “socially constructed process” that sociologist Beth Richie calls “gender entrapment.”  Richie attributes such black women’s relationships with lawbreakers and tolerance of domestic violence to gender socialization that is grounded in ostensibly favorable stereotypes about black women’s strength, a variant of racial solidarity steeped in a mythology that black men are endangered and need support, and a negative view of law enforcement and the criminal justice system, particularly with regard to the ability of the state to respond appropriately to black men’s threat to black women’s safety.

Aginah makes clear that the consequences of gender entrapment for black women caught in its grip escalated over time.  “Justice for Her” portrays the inordinate impact the “war on drugs” has had on black females.  As part of the “war effort,“ prosecutors brought conspiracy charges against women who engaged in mundane acts like taking phone messages for their drug-dealing partners or allowing those partners to leave possessions in their homes.  Mandatory minimum sentencing provisions, which left no room for judicial discretion, required that the female co-conspirators receive sentences comparable to those imposed on full-fledged participants in a drug ring.  The male drug dealers could reduce their jail time by substantially assisting the government to arrest and prosecute others engaged in illegal activity.  As a result, many implicated their wives and girlfriends in their crimes, whether or not the women were in fact involved.  The “playa” mentality, which equated black masculinity with emotional detachment, made it easier for black men to exploit women with whom they had relationships as a way of achieving lighter sentences.  If the wives and female partners had no actual significant involvement in the illegal operation, they had little information to offer so as to procure a deal for themselves. Moreover, because of either loyalty or the fear of retaliation, women tended to be less willing to “snitch” or to testify against their men.

The increased prosecution and incarceration of black women who were mothers in turn put an added burden on the black women who were left behind to bear the burden of financing defense costs, commissary costs, childrearing costs, telephone costs, and other expenses required to maintain contact between the incarcerated mothers and their children.  In addition, though greater numbers of blacks now serve as prosecutors and judges, the injustice and arbitrary treatment of ordinary black citizens that is built into the structure of the criminal justice system are added to the female defendants and their families had to endure.

The Significance of “Justice for Her”

Aginah Carter-Shabazz is not a sociologist, anthropologist, or disinterested interpreter of the black world any more than she is a professional filmmaker.  Rather, she is an ordinary, everyday practitioner of black culture and an organic social and political critic, activist, and above all storyteller.  “Justice for Her” and Choicez explore the decisions Aginah and Nas made as individuals.  Yet, the events recounted in the video and book reveal a context of social, economic, and political forces that were beyond the women’s control and that limited their options, as they do for too many black women.

Although Aginah turned to popular media to fulfill her need to process, come to terms with, and memorialize the impact of Nas’s murder trial on herself, her family, and her friends, producing “Justice for Her” was also “a vital and necessary act of [political and social] agency and [public] storytelling [as a defense] against inaction and amnesia,” as Patricia Zimmerman puts it in her book The Home Movie Movement. In revealing her family’s private trauma, “Justice for Her” publicizes a broader injustice, offers a fierce institutional critique of the criminal justice system, and creates an object lesson against which to assess the current state of black popular culture.  Aginah’s efforts show that amateur or better yet vernacular documentarians, who want to move their true stories of injustice and social inequality from the margins to the center of attention and concern, have the potential for infusing an element of progressive politics into black popular culture.  That is what “Justice for Her” does.