The Lived Experience of an Oxymoron: Harry Reicher’s Visual Approach to Law & the Holocaust 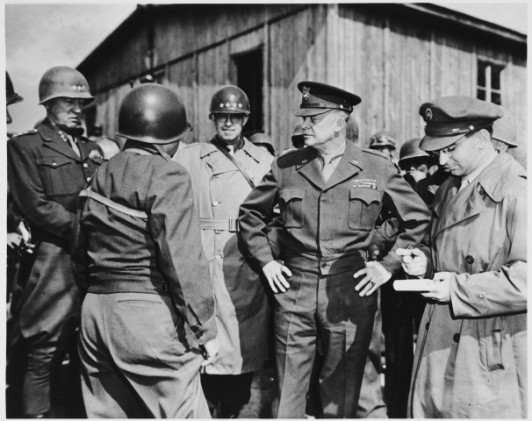 I got to know Harry Reicher (1948-2014) when he and I rode the train together between our homes in NYC and Penn Law School in Philadelphia.  Harry, who taught Law & the Holocaust at Penn for almost two decades, made extensive use of visual materials in his course.  An authority as well on international human rights and a dedicated teacher, he spoke enthusiastically about the passages of visual material he culled together as valuable data for his students.  (His syllabus can be found on the website of the Penn Program on Documentaries & the Law.)   I was so intrigued by Harry’s pitch that I sat down with him one day and took notes as he explained the clips he used in his course.

Harry was thrilled to be selected as the inaugural Rutman Teaching Fellow at the USC Shoah Foundation-The Institute for Visual History and Education.  Near the end of his one-week tenure there this past July, he gave a talk entitled “Use of Film in Teaching the Legal Dimension to the Holocaust.”  The talk provides a very useful explanation of Harry’s embrace of visual images in his pedagogy.

Harry considered Holocaust Studies in Law to be a counterintuitive notion, “the ultimate oxymoron.”   He said that the “Nazis were not new in using laws to discriminate against the Jews” or anyone else.  They did, however, “take it to the ultimate extreme and beyond to the point of obsession.”  “They were no respecters of law.”  “They did not respect the constitution,” “law or legal processes or legal systems.”

The Nazi Regime had two reasons for utilizing law to the extent that it did.  Laws were intended for “public consumption, particularly for overseas consumption,” so that the Reich could maintain that it was not “a lawless society.”  “And what is more, you in the United States have your Negroes, we have our Jews.  And they took great comfort from the fact that in the United States there were laws, the Jim Crow Laws discriminating so egregiously against African Americans.  So law was very, very useful as a propaganda tool.” A second and perhaps the main reason for the fixation on laws was the “militaristic ethos which suffused the country.”   “People were brought up to venerate the Prussian military officer.”  “[K]ids were brought up with a sense of order and orderliness.” “And they were conditioned to obedience of a father figure… . [a]nd that was more easily transferred over on to a fuhrer.”

In Harry’s view, the Holocaust was “outside of the range of normal human experience.  The barbarities which were committed by the Nazi Regime were so great and so terrible that we cannot conceive of them; we cannot relate to them and therefore sight is even more important in learning and conveying the lessons.“  That the barbarities were done under color of law contributed to their horror.

As he explained in his talk, Harry used excerpts from rare archival footage, narrative motion pictures, and documentaries to make Holocaust law come alive for his students.  He started his talk with clips from General Eisenhower’s April 14, 1945 visit to the Ohrdruf Concentration Camp, which is where, according to Harry, “the use of film to tell the story of the Holocaust” began.   He credits Eisenhower for ordering Army photographers and filmmakers to make a visual record of conditions there because of what Eisenhower foresaw would be its likely future use, i.e., to serve as evidence in war trials and to debunk  Holocaust deniers who would attribute stories of what happened at Ohrdruf to propaganda.  Harry went on to show clips from Leni Riefenstahl’s documentary of the 1934 Nazi Party Congress, “Triumph of the Will” in analyzing the “Führerprinzip” or the mystique of Hitler as “a quasi-messianic demigod.”  He ended with a segment from Roman Polanski’s historical feature movie “The Pianist” that illustrated how law “affected the daily lives of the Jews.”

The Nazis decreed nearly 2,000 laws that Harry grouped around nine themes:  Definition of a Jew; Racial Purity; Denial of Full Citizenship; Deprivation of the Capacity to Earn an Income; Expropriation of Property; Exclusion from Educational Opportunity; Segregation and Restriction of Movement; and Branding.  And then there was “The Final Solution.”   Moving from the macro to the micro in his analysis, Harry would begin with the broad contours of the law and moved on to “excerpts from [written] memoirs, diaries, and survivor testimony” to convey the experience of living under the legislation collected under each theme.  There was a “gap” in his visual archive with regard to “the direct and immediate impact [of these laws] on the daily lives of ordinary, walking, talking, thinking, feeling human being like every single on or us … . “  He saw in the Visual History Archive of the USC Shoah Foundation, with its roughly 52,000 interviews relating to the Holocaust, the possibility of bringing that impact to life “in a way that the printed word itself cannot do.”  “The detail which emerges about the workings of the legal system, in practice, in the real world at the grassroots level, [is] just extraordinary.”

As an example, Harry summarized the interview of a woman who, as a girl, went to school Monday through Saturday.  One Saturday morning, a teacher informed her and several of her classmates that they were no longer to attend school on Saturday.   When the student informed her mother of the teacher’s statement, her mother assumed that the student had misbehaved and was being punished.  The mother accompanied her daughter to school on Monday morning to discuss the matter with her homeroom teacher.  The “teacher says no, no, [the child] did not misbehave.”  A regulation “came down that said that … Jewish schoolchildren cannot attend school on Saturday.  Saturday was the best day of the week for them.  Why?  Because all the extracurricular activities … took place on Saturday.  It was a terrible blow to this girl.”

Harry noted that he had “studied how the education system was gradually closed to Jews, but this is one way in which it came to life.  And this, by now elderly woman, says that she was very, very upset but she adjusted.  How did she adjust?  She started thinking in different terms.  Until now I had only one day a week off, now I’ve got two days a week off.”  She planned activities with other Jewish girls instead.

Harry concluded, “When you sit there and listen to these testimonies, every word, almost, is a treasure, because it resonates… . [T]his sort of visual testimony brings so many nuances and details to life.  And you cannot get the same flavor by reading the same thing in a book, in memoirs, or a diary.”

Harry did not provide a citation to the interview of the woman who remembered being “very unhappy” about being barred from Saturday classes (like music and drama) in 1935, so I had to do some research in the Shoah Archive to find it.  I listened to excerpts of more than a 100 interviews that mentioned educational exclusions visited upon Jewish children, adolescents, and young people before I found the one I was looking for: Margaret Gans Stark, Interview number 12123.  Now, I am no way near as dogged a researcher as Harry was.  I kept going because I found it difficult not to listen to just one more story of a child who was deprived of an equal education because of religion and ethnicity, one more story that just might be the one Harry related, one more story that was as universal as it was particular.

Slowly it dawned on me why I kept searching for the girl in Harry’s example.  The feeling of being turned away from a school because of one’s race or ethnicity was something I identified with because of an experience I had in 1953 when I was almost five years old.  My mom took me to the school a few blocks from my aunt’s house (which was where we had landed following my parents’ separation) in order to enroll me in kindergarten.  A white woman met us just beyond the doors and informed us that I could not go to school there because I was a Negro.  I remember that!  The nearest school for blacks was a long walk beyond.   I only went to that school for one year.  The Brown decision which ordered the desegregation of public schools was handed down in 1954; it changed everything and nothing.

I can only image how ecstatic Harry must have been to dip into the treasure trove of visual data maintained by the Shoah Foundation.  Legal scholars would do well to emulate Harry’s passionate quest for visual evidence to illuminate law’s actually impact on people’s lives.  We too often forget that people not only accept the law, but they also work around it, subvert it, and resist it as well.  We should be diligent in seeking visual knowledge of the good the law can do and even more so the harm it actually does.