To Ask or Not to Ask? The Law, Ethics, & Etiquette of Capturing the Public for “DIY Stock” 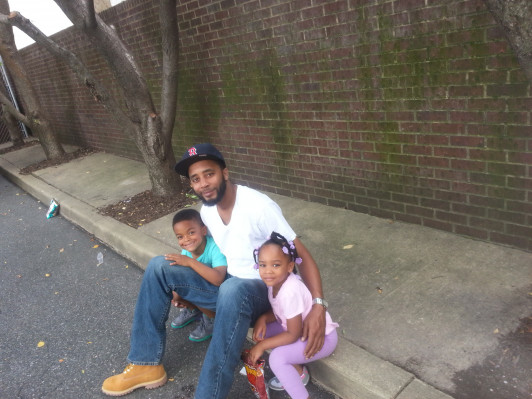 Happy on the curb by Frank White

(Nothing written herein should be treated as legal advice.  The law relevant to taking pictures of random strangers in public varies from state to state and the possible scenarios to which the law might apply are too numerous to analyze here. In any event, this is an area where ethics and etiquette may have more bearing on what is acceptable behavior than jurisprudence.)

In a few weeks I will be asking the students enrolled in my visual legal advocacy seminar to take their cellphones. cameras, and other devices to public places to capture still images for our DIY Stock Photo Gallery.   This exercise is useful for getting law students to think creatively in terms of image composition and the importance of human interaction in photography and cinematography.  It prepares them for shooting or directing the shooting of supplemental footage or b-roll.  The seminar members usually come back with a handful of stills that positively contribute to the class’s videos.  Most are of inanimate objects and people’s backs.  It would, of course, be nice if the assignment uncovered a student or two with a hidden talent for photographing faces.  On one level, though, all I really want is for them to be aware of the legal and ethical questions associated with the capture and dissemination of the kinds of images they will be considering in their roles as producers and directors of visual legal advocacy or as lawyers vetting the documentary work of clients.

Still, I suspect that the students might produce better images if they had more guidance regarding the norms applicable to photographing and filming the public in public without the target’s consent.   As lawyers, we quite naturally start with the law, but the law is not definitive here.  In America in general, one is typically free to photograph individuals who are in public places or in public view as long as your behavior does not otherwise constitute a crime or a tort (a civil wrong like assault, battery, false imprisonment, intentional infliction of emotional distress, trespass, or intrusion upon seclusion).  In my view, the law likely rules out the most egregious, in-your-face tactics of street photographers constitute assault (i.e., an attempted battery), but leaves the great bulk of candid capture of the public legally unrestricted.  Whether such conduct is a breach of ethics or etiquette remains to be considered.

Culture plays a role in sanctioning consent-less photography and cinematography.  Many folks would argue that, culturally speaking, people implicitly consent to being captured on camera whenever they negotiate public spaces.  They should have no expectation of privacy or a right of ownership of their image. 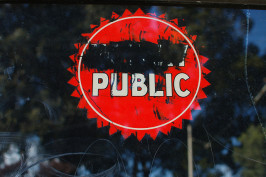 Just public by Regina AustinFurther, the freedom to shoot others in public is reciprocal; we are permitted to photograph others as we are in turn subject to be photographed.

There are limits, however.  The use to be made of the images matters.  (The concern here is with restrictions on use and distribution related to the lack of express consent to capture.  There are other limitations or norms regarding distribution in a social justice or public interest context that this blog will explore in other posts.) Strictly commercial use without the subject’s actual consent is against the law, explicitly so in New York State, a leader in these matters.  Where the use is artistic or editorial or newsworthy, even though commerce is involved, there is no legal restraint, largely owing to first amendment considerations.  Thus, shooting “DIY Stock” for use in a nonprofit, social justice video project would not be subject to the same constraints applied to commercial stock.

Culture is often more dynamic than law and it does appear to be changing with regard to visual recording of strangers by strangers in public.  Cameras are everywhere.  As there is little that can be done about surveillance cameras, incentives to assert more control over private camera use are increasing.  Digital technology and social media make it a snap to distribute images near and far.  As the potential audience increases, the anonymity of subjects is threatened.  It is not uncommon for amateurs to take and circulate images that are cruel, mocking, and degrading.  That has made members of the public more leery and fearful of cameras.  The result, I suspect, is growing support for the minority (pro-consent) position: “Ask first!” or at the very least, “Honor expressions of a reluctance to be captured and delete or erase an image if asked to do so.”  The change is likely to be reflected in evolving notions of ethics and etiquette before it is adopted as law.

I want my students to approach capturing images in public with a mindset that is likely to (a) yield good images with a bit of a “street vibe” and (b) affirm our commitment to social justice, while at the same time (c) avoid confrontations and (d) foster positive social interaction. 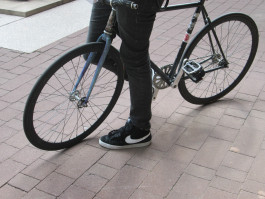 Boarder's Black Bike by Regina AustinI have looked at the ethical standards of professional image takers and media makers, discussions in social media on street and documentary photography, and commentary by academics.  Here are some suggestions gleaned from others that I will share with my students. The focus is less about law and more on ethics and etiquette.

1) In most cases, it is acceptable to use stealth to capture images in a public place.  Try not to let the targets know that you are aiming at them.   Look like you are using your cellphone to text.  Act fast.  Try to shoot in a way that leaves the subject unidentifiable.  After the fact, especially if caught in the act, follow photographer Eric Kim’s suggestion to “make eye contact … , smile, and say ‘thank you.”’

2) The wisdom of seeking permission varies with the closeness of the subject to the camera, the subject’s likely self-consciousness and concern about being captured, and your sense that the subject might react with displeasure or hostility to engagement.

3) Ask, especially when it wouldn’t hurt to do so.  A posed portrait may be just as useful as a candid likeness.  What you lose in spontaneity and naturalness, you may gain in intimacy and greater contextualization.  It goes without saying that, when asking either before or after shooting, you should be “friendly and courteous.”

4) Avoid contributing to the stereotyping of individuals and groups.  Curb the influence of your own biases.  Aim for representations that are accurate and complex. “Treat all subjects with dignity and respect.” (These admonitions come from the Code of Ethics of the National Press Photographers Association.)

5) Take care when focusing on people who are physically or “aesthetically” vulnerable in public (like people who are homeless, mentally ill, physically disabled, injured, or grieving a loss or who have unusual features).  Simply taking pictures of “eye catching” people, even if it can be justified by a specific seminar video project, is not the goal.  Your mission is to “capture socially conscious images,” images that show how “exceptional” folks are just like us and that the quality of their lives depends on a larger context just like ours.

6) When the subject is a child who might be identifiable, absolutely ask. People have the right to be protective of their children. (This subject is covered in a conversation between seven photographers from around the global at the back of Howarth and McLaren’s book Street Photography Now.)

7) “Do not intentionally contribute to, alter, or seek to alter or influence events.”  (See the NPPA code once again.) In other words, don’t make a spectacle of yourself.

8)  Suppose it ultimately comes down to one question:  Should I ask for consent or not?  When in real doubt, move on.  Observe a new scene.  Assess the surroundings.   Be ready for something or someone else to arrest your attention.

9) Remember that the exercise is practice intended to develop your legal, ethical, and social chops as a visual legal advocate.