Storytellers Needed! Collaborations and the Promise of i-Docs

A few weeks ago,  I attended the joint ACM (National Alliance for Community Media) and NAMAC (National Alliance for Media Arts & Culture) Conference which was held in Philadelphia. There were two panels that especially interested me.  One was entitled “Long Term Collaborations with Social Justice Organizations,” while the other was “Media Arts Organizations in the Roaring 2020’s.”  At first, I did not see the connections between them, but a bit of reflection fixed that.

As I indicated in a prior post, the Penn Program on Documentaries & the Law is involved in a number of collaborative activities with local media arts programs like Scribe Video Center and community and public media outlets like PhillyCAM.  Both organizations were represented on the Collaborations panel (by Hye-Jung Park and  Antoine Haywood, respectively). These and similar organizations make technology and training available to community associations and social justice advocacy groups, free of charge or on a subsidized basis, so the latter can tell, broadcast, or otherwise distribute their stories in video format.  The technology and training provided become tools for group empowerment and activism.  The groups “own the message” with regard to their productions.

Nationally, nonprofit non-fiction media makers are increasingly seeking collaborations with social justice groups, particularly as a way of expanding the distribution of the former’s documentary products.   Collaborations panelist Molly Murphy of Working Films, which promotes the distribution and utilization of social justice documentaries, suggested that social justice groups and media makers should agree on the purpose, outcome, and process (POP) of their partnerships.  Drawing on the work of Gillian Caldwell, former executive director of WITNESS, Molly provided a list of factors that make for successful partnerships: a “shared vision,” “clear expectations regarding roles and responsibilities,” a “system for communications with clear points of contact,” “awareness of the power (differential?),” “willingness to submerge identity and share credit,” “flexibility,” “honesty,” “trust,” and “respect.”

However, a few members of the audience expressed skepticism about such  collaborations.  One voiced the view that “marketing social justice” was a contradiction in terms.  Authenticity is the key to impact.  Social justice groups offer access to real warriors in real struggles for social justice.  The “professionalization of social justice,” on the other hand, created inauthentic media.  Another audience member condemned the role played by the communications and marketing departments of nonprofits that fund social justice media because they focus on branding and ownership of the message, concerns not generally emphasized at the programming level.  Community funding and community control are essential in his opinion.

I worried about the implications of the dialogue for the Penn Law Docs Program and our Visual Legal Advocacy Seminar which produces videos in cooperation with social justice groups.  I like to think that, because we are lawyers or almost lawyers operating in the law school context and make videos that pertain to concrete instances of, and legal responses to, injustice, we are immune from most criticisms of exploitation, insincerity, and disrespect.  Representation of the claims and concerns of others denied, yet still seeking, social justice is the essence of our professional calling.  In soliciting the stories of real claimants, litigants, and activists for inclusion in our works of visual legal advocacy, we consider ourselves bound by the normative demands and constraints of both legal and image ethics.  Furthermore, the public interest law organizations or social service providers with whom we work act as intermediaries between us and their clients and members of allied activist or advocacy groups.  We count on these professionals to provide an extra layer of protection of the interests of people whose participation in our video projects is crucial.

Our videos generally revolve around narratives or stories told by persons who have first-hand experience with the subject at hand.  We proceed on the premise that storytelling is the most impactful and long lasting way to teach people about how the law works or should work. The stories, of course, are often responses to questions shaped and molded by what the law recognizes and acknowledges by way of rights and obligations and what it does not, but could.  Inclusion in our visual advocacy of real community voices telling stories from the perspective of their reality, and often at the risk of their own security and anonymity, contributes greatly to the authenticity, credibility, and persuasive power of our work.

We believe that our videos benefit our social justice partners or collaborators in their struggles to educate and to organize.  Video can aggregate individual interests to create community by providing an impetus for discussion and recognition of common values.  Through streaming on the internet, public screenings, broadcast on public access television, and liberal dissemination of DVDs, we distribute our work with the aim of supporting the activism of our collaborators.

Where social injustice is concerned, though, it is not always easy to find groups of lay advocates and grassroots activists with whom to partner.  Securing storytellers is  especially problematic where people experience injustice as a private matter and have few resources for organizing and joining together for mutual support.  For example, working in cooperation with a provider of legal services for very low-income Philadelphians, we undertook a video project intended to assist pro se litigants or parties who were handling their own child custody cases in family court without the assistance of a lawyer.  The project had to be altered when we discovered that there really were no grassroots organizations composed of past or present self-represented parties and therefore no obvious source of narratives about the impact of an important gap in access to legal services.  Surely survivors of the process would be a good source of knowledge, wisdom, and support for parents and other caregivers attempting to negotiate the custody labyrinth.  If only there were a way that our videos could reach potential storytellers, energize potential organizers, and generate activism.

The second panel on what the future holds for media arts organizations suggested that one solution to this quandry may be interactivity, i.e., interactive storytelling and interactive documentaries.    I had not heard the term “i-Docs,” which is short for interactive documentaries, before panelist Ingrid Koop, Director of Digital Initiatives of the Tribeca Film Institute, mentioned it. TFI Interactive falls within her responsibilities.  i-Docs unite interactive multimedia digital technology and documentary practices to turn subjects and audiences into co-creators and active participants.  Imagine if you will a website tricked out with video, photography, illustrations, animation, graphics, text, and sound, supplemented by all manner of participatory social media.  i-Documentarians pay close attention to how audiences are consuming technology and media and how technology and media are transforming audiences for documentaries.   Games with documentary content, apps, even installations have been used to make documentaries interactive. Take a look at some examples of i-Docs on the website Localore. 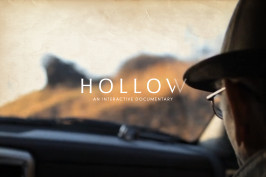 The best known i-Doc may be “Hollow” which won a Peabody Award and has garnered a 2014 Emmy nomination in the category “New Approaches to Documentary.”  Here’s a short description of the project:

“Hollow is an interactive documentary and community participatory project that examines the future of rural America through the eyes and voices of those living in McDowell County, W.Va. Hollow combines video portraits, data visualizations, photography, soundscapes, community-generated content and grassroots mapping to bring these stories to life through an online experience.”

“Hollow” explores the impact on coal country of an aging demographic and a failing infrastructure as expressed primarily by 30 residents who did not move away.  The narratives unfold at the choice of the viewer.  “While Hollow is a storytelling project at its core,” and focuses on the past and the present, it “also strives to encourage change and growth through new media. Using a WordPress blogging tool that feeds into the main experience, residents will continue to update their stories and initiatives to keep users updated and potentially encourage them to get involved.”  The interaction continues on Tumblr, Facebook, Twitter, and the Hollow Interactive Vimeo Channel. “Hollow” takes the viewer on an extraordinary journey that occurs on multiple tracks at once.

Proponents of i-Docs suggest that works like “Hollow” will impact our notions of what documentaries are and can do with regard to participation and authorship, the perception and negotiation of layered reality, activism, and the use of HTML5 authoring tools.  If they are correct, then i-Docs may be a mechanism by which visual legal advocates can employ documentary practices and other forms of digital media to encourage storytellers to step up and join with others to create communities around the pursuit of social justice. The Docs Program will certainly be exploring in the near future the potential of i-Docs to link social justice  storytelling, information dissemination, and community engagement effectively.