The First-Graders Who Were “The Memphis 13”: A Different Visual Take on Brown v. Board 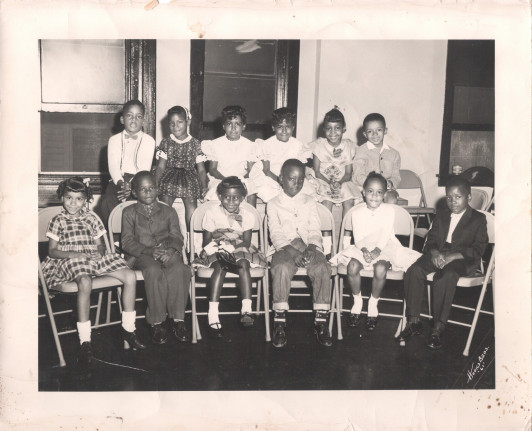 The Memphis 13 (Courtesy of Daniel Kiel)

This year marks the 60th anniversary of the landmark school desegregation case Brown v. Board of Education in which the U.S. Supreme Court ruled that “separate but equal” schools for blacks and whites was no long constitutionally acceptable and ordered the consolidation of dual school systems “with all deliberate speed.”  Memphis, Tennessee took its own good time in complying with Brown.  Whereas earlier attempts at desegregation in other cities (such as Little Rock) were accompanied by violence, in Memphis it was relatively peaceful.  Rather than start at the high school level, on October 3, 1961, Memphis began with a handful of 5-and-6 year-old black first graders who were scattered among four different all-white schools.  “The Memphis 13” is their story.

“The Memphis 13” is a superb short documentary.   Melliferously narrated by the mayor of Memphis, A.C. Wharton, Jr., the film is at once moving and heartbreaking.  It focuses on the adults who, as children, bore the physical and psychological burden of being the first blacks to attend all-white schools.  It is sad, though perhaps not surprising, that some of the students describe themselves as having been “miserable, “alienated,” and “reluctant to go to school.”   Changing demographics, white flight, and the establishment of private schools meant that integration was never truly achieved.  Still, upon reflection, most of the former students believe that what they did to further the cause of integration was important and necessary and they are proud that they were a part of it.  The viewer comes away with a real sense of the magnitude of the contribution the children and their parents made in undertaking to be pioneers in crossing the educational color barrier and how little recognition they have been accorded by their fellow Memphians and civil rights history.   (A preview is now available.  The full video will be streamed online beginning in August.)

“The Memphis 13” was directed and produced by University of Memphis Law Professor Daniel Kiel and bears the imprint of his legal scholarship.  A native of the city, Kiel started researching the history of school desegregation in Memphis as a law student at Harvard back in 2003 when the 50th anniversary of Brown was fast approaching.  Although he published traditional written scholarship on the subject, it seemed incomplete without the firsthand stories of the children.  A definitive account would have to include them.

In 2009, Kiel received a grant to locate and interview the former first graders and others involved in the initial phase of school desegregation in Memphis.  He decided to collect the oral histories on camera.  That made all the difference in the world.

Pulling together the resources to make “The Memphis 13” was not easy.  Kiel delayed interviewing until he had a professional quality camera and someone to help him use it.  The wife of one of the early interviewees put him in touch with a local filmmaker who served “as a sort of fairy godmother to the film.”  Kiel also had the support of “a network of people [including cinematographers, editors, and marketers] committed to the project and uninterested in being paid for it.  Even those who charged [him] did so at a reduced rate.”  The approaching 50th anniversary of the transfer of the Memphis 13 to all-white schools and a commitment from the National Civil Rights Museum to show the finished product on the 50th anniversary – before even Kiel knew what that product would look like – lent urgency to the production process.  The film premiered in October 2011.

Kiel had assumed that he would meld the accounts of the Memphis 13 into the existing story but the adults who had been those children offered a totally unexpected chronicle.   Their recorded interviews reveal an emotional rawness that seems to be the product of their having been infrequently asked about their experiences as first graders, which is likely a product of their not having been really recognized for what they had done.  As kids, they lacked the words and the liberty to express what they were going through.  As adults, they were free to articulate their feelings of loneliness and isolation from each other, their white classmates, their parents, their siblings, and their playmates.  The film is compelling in part because nearly everyone can relate to being a child, different and alone, in some new and wholly unfamiliar situation.  Kiel came to realize that not only was he making a film about “an event in history,” but he was also “doing a study on how children experience … barrier breaking moments.”  Thus, the film reveals a human dimension of Memphis’s school desegregation saga that was not part of the official record.  The documentary made a substantial contribution to the civic life of Memphis and as a result, the Memphis 13 are unrecognized heroes of the Civil Rights Movement no more.

Kiel was untenured when he undertook the project.  He did enough traditional written work to satisfy the tenure requirements, and also produced a law review article based on the oral histories on which the documentary draws.  In his view, the film is scholarship and his faculty considered it as such, sending the film out for external scholarly reviews as any other piece of scholarship.  Legal scholarship rarely explores the effect of lawsuits and legal change on impacted populations.   “The Memphis 13” makes an intellectual contribution by providing data that challenges the received wisdom regarding the implementation of the Brown decision and offering a new way of looking at the costs and benefits of a strategy for social change.

Kiel believes that the success of the film will have an impact on his future scholarly endeavors.  To him, “the most useful scholarship is accessible to an audience far wider than those who read law review articles,” an audience of people that is not “of any meaningful size.”  Rather, he approaches writing law review articles as an exercise in making himself an expert on a subject.  “But that is merely the first step.  Once an expert,  .  .  . the scholar’s responsibility is to make the scholarship accessible.  This can be done through writing, but the film has reinforced what should be obvious about its superior power to reach people.”

For legal scholars thinking about turning their writing into a work of visual legal scholarship, Kiel offers the following words of encouragement:  Embrace the idea that it can be done with very little background in filmmaking.  “It is intimidating to move outside of the comfort zone of writing and serving on panels, etc., but the skills that would make one a strong scholar with the ability to gather information and synthesize it into a coherent narrative and/or argument are the same ones that would allow a film to be produced.”   If documentary filmmaking requires artistry, “there is artistry in strong [script] writing as well; it probably comes more naturally to traditional legal scholars.”  Finally, visual scholarship has a number of selling points, including “its potential reach, heightened clarity, flexible formats, and if done well, compelling results.”