Due East: The Chinese Internet Audience 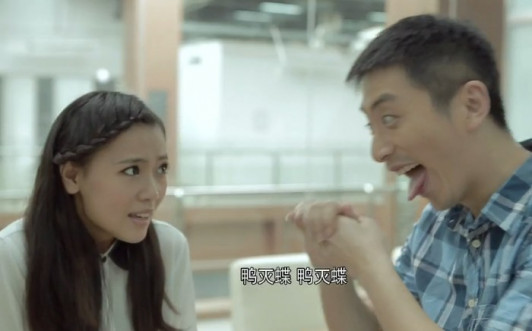 A scene from "Who Would Have Thunk It?"

Michael Wong is a Penn Law graduate who gave up practice in NYC to become a media maker in China.  While a student at Penn he produced two documentary shorts.  He writes occasional posts from his new vantage point under the title “Due East.”

In a Spring 2014 article in Documentary magazine, Peter Hamilton reported that the Chinese government is supporting the production of entertaining and informative documentaries in an effort to counter its people’s taste for television programing that is “trashy” and “vulgar.”  I wonder if the Internet will be next.  I wonder too if the effort to increase opportunities for quality viewing will succeed.

For a sense of how awful it is, consider a very hot web series on Youku.com called “万万没想到” (which loosely translated is “Who Would Have Thunk It?”).  It’s actually hard to describe this show without making it sound better than it is.  Basically, they take a nonsensical script, get some people to speak the lines (I won’t call them amateur actors because they’re not even trying), shoot with a low-end camera in whatever location they can find, spend no effort on lighting, camerawork or audio, edit the footage incomprehensibly, and then upload the unwieldy and awkward result onto the Internet.

And get millions of views.

Maybe you’re thinking this is a kitschy, tongue-in-cheek thing.   Trust me when I say the viewers are not “hipsters” enjoying Who Would Have Thunk It? because it’s “so bad, it’s good.”  That would require self-awareness in the producers and a sense of irony in the viewers that, frankly, do not exist here.

The average Chinese Internet user inhabits an irony vacuum.   When a Chinese girl or guy says the equivalent of “Check out my bling!” chances are she or he is not making a self-mocking reference to celebrity culture or an implied commentary on materialism and greed.  She or he is simply saying, “Look at my expensive stuff!”  Taking “selfies” is blatant and shameless.    Comments sections read like they were written by fourth graders.  In crayon.  Black crayon on white paper.  Attempts at humor are few and far in between.

So why, when, censorship not withstanding, these viewers can choose from a smorgasbord of domestic and international content that can blow their minds, inspire awe, amaze and titillate, do they waste their time with Who Would Have Thunk It?

A scene from "Who Would Have Thunk It?"

The Chinese followers of Who Would Have Thunk It? are not watching it for quality.  They know the show is terrible.  That’s precisely why they like it.  They watch Who Would Have Thunk It? because it’s a close equivalent of the reality they know.  Nothing particularly enlightening or inspiring.  Not really funny.  Just everyday conversations of ordinary people.  The lighting is as ugly as it is in real life; the sound as muffled and “static-ky” as the obnoxious ambient sounds that pummel the ordinary Chinese ear.  No performance or originality, just like Chinese coworkers who wouldn’t bust their brains trying to be witty on their lunch break.

In today’s China, signs of economic growth are ubiquitous.  Fancy cars, brand name clothes, everyone is constantly bombarded with images of the rich and famous.  And ordinary people are sick of it.  The last thing they think they need is to look at their smartphones or computers and see another fancy daydream far removed from the life they know.  Otherwise, it becomes that much harder to rouse themselves and walk down the dusty road to their dreary jobs in whatever smogged-up metropolis they call home.  The Chinese are nothing if not extremely practical.

People enjoy Who Would Have Thunk It? because it’s unadorned and unassuming; it reflects the limitations the Chinese perceive in their own lives.  The vast majority of Chinese do not harbor secret fantasies of being discovered by a talent agent who whisks them away to star in big screen movies, live in fancy hotel suites, and ride around in chauffeured cars.  They don’t dream of inventing and patenting the next big thing and rising to the top of the Forbes list of richest people in the world. They think they know the limits of their good fortune in life and are merely looking forward to a slightly better future.  Just some improvement, some hope for the next generation.

This is not all bad.  For instance, you’ll never see the Chinese leasing luxury cars they can’t afford, getting a pipedream mortgage that blows up into foreclosure, or wasting all their money on paraphernalia to support a sports team.

The viewers’ interest in Who Would Have Thunk It? makes me seriously question, though, whether they’ve lost the ability to dream.  I want the Chinese to dream!  I want them to appreciate a larger-than-life story, the mythical hero’s journey, and find equivalents in their own lives.  Why? Because I believe in the human spirit, the individual’s ability to control his destiny and triumph in order to achieve greater self-awareness, love, and strength.

The Internet can show you the way, enrich and expand your mind, but you have to watch something other than a show that is as dreary and unimaginative as your own perceived existence!

I know I sound culturally biased and condescending, even a little bitter.  But I also know that dreams are not an American invention. I don’t need to say more.  Instead, I’ll just keep producing Internet content here in China and doing my small part in the effort to make the Chinese dream a little more.