Editor’s Note: Each summer Penn Law students hone their skills through a wide array of private and public sector internships across the country and around the world. Generous financial support and fellowships for international and public interest work enable students to pursue diverse assignments in the U.S. and abroad. This dispatch from William C. Moine, L’14, is one in a series of firsthand accounts by Law School students about how their summer employment opportunities are preparing them for their legal careers.

Moine is planning a career as a public defender. Supported by an Equal Justice Foundation stipend, he is working in Sacramento, in the Office of the Federal Defender for the Eastern District of California, which provides legal representation to persons financially unable to retain counsel in federal criminal proceedings.

The Eastern District of California is the largest federal district in the country and covers an area stretching from Vallejo in the west to the Nevada border in the east and from Bakersfield in the south to the Oregon border in the north. I have been in Sacramento for two weeks and have already witnessed more courtroom proceedings than I have ever had the opportunity to see before. 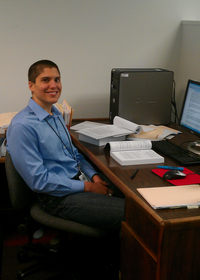 As part of an intensive one-week “boot camp,” which gave all of the research and writing interns a crash course on federal criminal defense and the federal criminal justice system, we observed a trial before an Article III judge. I saw the public defender cross examine two witnesses and enjoyed seeing the prosecutor make his closing argument, although we did not get to see the public defender make his.

So far I have worked on a variety of research assignments. Many of these involve Fourth Amendment search and seizure and probable cause issues regarding cell phones, smart phones, and other technology.

Because the majority of cases do not make it to trial, much of the work of the federal public defender involves sentencing mitigation. Consequently one of the big tasks I am currently working on is a sentencing memorandum for one of our clients so that the public defender and prosecutor can negotiate a plea agreement that ensures our client gets a fair sentence.

My favorite part of the summer so far has been all of the client interaction. My supervising attorney brought me in to interview one of the office’s clients before his initial appearance. I interviewed him to verify his financial information to ensure that our office could represent him and to record his contact information. There was an interpreter present because the client spoke Spanish, and this greatly changed the dynamic of the interview.

I also assisted the misdemeanor students – 2Ls who can carry a caseload and represent people charged with federal misdemeanors – with their petty offense calendar, which is similar to traffic court at the county level. The clients were people who received traffic tickets or other similar infractions while on federal land and had to appear in federal court to plead guilty or not guilty. Since the misdemeanor students only represent a small fraction of the people present, the research and writing interns go to the courthouse to help all of those who are representing themselves. This often requires explaining what they should expect when their names are called and what options they have. I went to law school to become a public defender and represent people at some of the worst moments of their life; speaking with these people perfectly aligned with my goals.

My classes at Penn Law helped prepare me for this internship. Criminal Law with Professor Morse gave me a fantastic introduction to the criminal justice system. I never felt lost or confused during the training when the attorneys reviewed federal criminal defenses and crimes. It would have been helpful to have taken Criminal Procedure and Evidence but I am definitely planning on taking those classes next year! I plan to participate in Penn Law’s criminal defense clinic as a 3L and will use many of the research and writing skills I learned in this internship in that clinic.

View more stories about Pathways to the Profession.