Dr. Ngozi Okonjo-Iweala is set is to be the first woman and first African national to head the World Trade Organization. 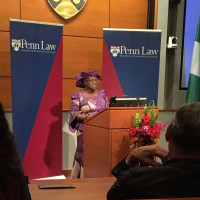 
Our friend, Okonjo-Iweala, is also known as “Wahala,” a popular Pidgin English word in Nigerian meaning trouble. She told us, “I loved this nickname …. To me, it was a badge of honor.” As a world-renowned development economist, author, and advocate, Okonjo-Iweala has been a force for gender-equal economic development, sustainable financing, and anti-corruption. Okonjo-Iweala has held some of the most distinguished positions in the government of Nigeria, the World Bank, and in global multilateral institutions. Okonjo-Iweala’s impressive ability to drive change makes her one of the most influential figures on the world stage. In a time of global volatility, it is a time to take stock of how she will govern at the WTO.

In February 2019, we conducted a two-week-long interview on redefining leadership with Okonjo-Iweala for our study on “Redefining Leadership in the Age of SDGs.”