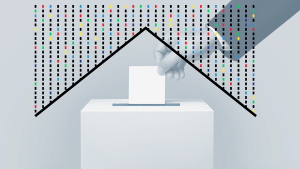 This is another commentary in a series issued by the 2020 Elections Project of the Center for a New American Security and the University of Pennsylvania’s Center for Ethics and the Rule of the Law and Annenberg Public Policy Center.

There has been continuous coverage about foreign election interference since the earliest days of the Trump Administration. On multiple occasions, intelligence officials and tech CEOs have testified to Congress about the way foreign actors are meddling with America’s democratic processes. Yet little has been done to significantly strengthen America’s defenses against foreign election interference. And we are now heading into an election season unprepared for the systemic attacks of which experts have repeatedly warned.

Most explanations for America’s lack of action point to partisan polarization. This is true in part. In a survey More in Common conducted with YouGov last month we found 60% of Americans feel concerned foreign interference will affect the outcomes of the 2020 elections. But concern is starkly polarized – it is shared by 85% of Democrats but only 34% of Republicans. This accords with earlier findings, such as a February Economist/YouGov poll which found 82% of Republicans but only 30% of Democrats confident the country can defend itself from foreign election interference.

There is more to this story than just polarization, however, as data shows significant disengagement from the issue among many Americans. In our survey 16% of Americans responded “Don’t Know” when asked if it is likely foreign countries will attempt to interfere in the 2020 elections. The Economist/YouGov poll similarly found 29% of Americans were “Not Sure” if Russia is interfering in the 2020 U.S. Presidential election.

We need a better understanding of why Americans are not more deeply engaged on the issue of foreign election interference. We need to understand, in order to find ways to build common commitments to American democracy that can transcend our polarization – otherwise, democracy itself could become the next casualty in our deepening internal conflicts.

To develop a deeper understanding of American attitudes and to complement national survey data, More in Common has engaged in daily conversations with a group of approximately 100 Americans—broadly representative of the country demographically and ideologically—via an online research platform. (Participants’ names have been changed to protect their privacy, and their responses have been lightly edited for clarity.) It is providing some foundational insights on which we can build democratic defenses.

“Our response to the foreign election interference is laughable. It’s inadequate because it benefited the current administration who controls 2/3 of the branches. Trump literally encouraged it on live TV when he asked Russia to ‘find’ Clinton’s emails and no one cared. It’s astounding that people who claim to care so much about the US don’t mind treason if it benefits them.”

“We also need to remove those in office who perpetrated this whole election interference farce and replace them with those who are not spending all of their time in office trying to undermine the President and what he is trying to do for this country, which is make it stronger! So much time is wasted by these stupid politicians because they have their own agenda and their own pockets to line.”

Although in the More in Common survey majorities of both Democrats (77 percent) and Republicans (56 percent) said it is likely foreign countries will attempt to interfere in the 2020 presidential election, there is intense partisan polarization around whether such interference will affect the outcome (see Figure 1). Partisans are similarly polarized on media coverage, with 60 percent of Democrats believing more coverage is needed while 73 percent of Republicans believe the media cover it too much. These findings echo those of an NPR/PBS NewsHour survey from January, which found 85 percent of Republicans but only 30 percent of Democrats felt the country is prepared to keep this year’s elections safe and secure.

“According to Wikipedia foreign election interference is when a foreign government covertly and overtly tries to interfere in a countries electoral process. I actually had to look it up because I wasn’t exactly sure. Google’s response was the Russian situation. Actually that’s the only case of the topic known to me.”

“Our country should be always on alert for this type of stuff since this threat has been always there. I am sure the government are doing their best to stop it right now, just like any other election.”

A second key insight is that even with growing concerns about threats to democracy, we should not assume that most Americans have given the issue of foreign interference much thought. Americans feel confronted with an overwhelming number of challenges, and when they are asked to describe how they are feeling, one word comes up time and again: “exhausted.” The scale of the issues we face nationally feels overwhelming: the continuing pandemic, its catastrophic economic fallout, the failures of national leadership, and the serious issues of racial injustice raised in the aftermath of the murders of George Floyd and other Black Americans. Asked whether they feel energized by what is happening in society and want to be more involved, or feel tired out and want it to go away, two-thirds of More in Common’s online participants say the latter. In this environment it is difficult for any issue that does not involve immediate health or wellness to remain salient.

It is important to highlight the large number of online participants who simply responded “I don’t know” or “I’m not sure what foreign election interference is” when More in Common asked if the United States should do more to prevent foreign election interference. With this as context, it is unsurprising that few participants expressed willingness to support potential solutions—less than a third were willing to pay a one-time contribution of $5 to safeguard our elections, and less than half were willing to write to their members of Congress to urge greater action. A similar sentiment is seen in More in Common’s national survey, where even among those respondents (66 percent) who say interference is “Very likely” or “Somewhat likely,” 24 percent are unconcerned about its impact.

There Is, However, Potential Common Ground

Despite the way that polarization and exhaustion make it more difficult to build public consensus around action to defend democracy, there are still signs of common ground. When asked what types of election interference are most likely, more than three in four Americans expressed a concern about foreign actors using social media to turn Americans against each other. Significantly, this shared concern transcends partisan differences: 75 percent of Republicans and 83 percent of Democrats agree on this risk.

Perhaps it is telling that where Americans most agree on the dangers of foreign interference is on its potential to exacerbate our internal divisions. There is plenty of combustible material—a recent study found 57 percent of Democrats believed it would be appropriate for a Democratic candidate for president to call for a do-over election if the candidate believed there were credible evidence of interference by a foreign government, and 29 percent of Republicans thought it would be appropriate for President Trump to refuse to leave office if he were defeated and claimed credible evidence of illegal voting. Foreign actors need only light a match on social media to get these fires burning.

A potential reason for hope is that individual voters have agency over the way they use social media, and this form of foreign interference feels credible to many. It may also be best first step in engaging more Americans in ways that feel relevant, immediate, and important—so that they don’t write the issue off as a concern for partisans.

“i don’t really understand what is going on so i don’t know if we are doing enough.”

In the More in Common survey that asked who is responsible for preventing foreign election interference, only 35 percent of Americans cited themselves as voters. That so few feel a sense of responsibility speaks to larger issues of agency, distrust, and the prioritization of more proximate concerns regarding family, neighbors, and community. But it also reflects the need for new approaches to break through and make foreign election interference an issue not just of national security but of community strength and solidarity.

There is a resilient and underappreciated faith Americans hold in their power to affect change—79 percent of Americans polled still believe that “Through their decisions and actions, citizens can change society.” Harnessing this faith is critical to mitigating the threats and potential negative impacts of foreign interference in elections in 2020 and beyond. The process starts by grounding the defense of democracy in the values and concerns most strongly and widely held by Americans.

Dan Vallone is the U.S. Director of More in Common, where he leads the organization’s research and strategy work to strengthen a shared democratic culture.