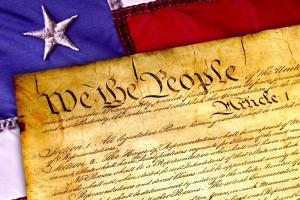 Today is Constitution Day, when we commemorate the day, 233 years ago, that 39 brave individuals signed the U.S. Constitution, providing the framework for a government of, by, and for the people. Our Republic is based on a Constitution that every president, starting with George Washington, has sworn to preserve, protect, and defend. Every member of the military and all who enter government service also pledge to faithfully execute the duties of their positions upon their promise of allegiance to that same Constitution.

Just days ago, we acknowledged the nineteenth anniversary of the September 11th attack on our nation, and cries of “Never Forget” echoed throughout “the land of the free and home of the brave.” Every 9/11 anniversary evokes both somber reflection and patriotic fervor. Less than a month following those attacks in 2001, the United States began what was labeled the Global War on Terror (GWOT) and initiated a military operation called Operation Enduring Freedom. Most people do not look beyond the anniversary’s patriotic solemnity to see what else America lost in the aftermath of the attacks and how dearly the war on terror has cost our democracy.

On Constitution Day in 2001, just six days after that attack on our structures and people, President George W. Bush displayed his lack of faith in the very Constitution he had solemnly sworn to defend. He issued a top-secret Memorandum of Notification that paved the way for the CIA to establish a program of state-sponsored torture. The CIA executed its new authority by establishing the Rendition, Detention and Interrogation (RDI) program. Behind these euphemisms, however, lay an interrogation program that descended into an abyss of extra-judicial kidnapping, indefinite imprisonment without trial, and brutal torture.

In faraway places that nobody was ever supposed to find out about, the CIA and military speculators systematically dehumanized people identified as possible threats to the United States. The stated goal of the capture and detention program was to coordinate preemptive strikes against those perceived to pose a threat to U.S. persons and those who might be planning such acts. Our gloves came off, and we aimed to match the tactics of our enemies for whom torture served as a key instrument in producing propaganda. Like a contagion, the malignant, brutal, and abusive protocols metastasized and spread to Guantanamo Bay, Abu Ghraib, and other places I’m not authorized to mention. The acts left lifelong scars on their many victims—both detainees and interrogators—and an indelible stain on the Constitution that those involved were sworn to protect.

As the torture program unraveled, the depravity of a program designed to create debility, dependency, and dread among its many victims became known. As light began to illuminate the darkness, so did the details of how the CIA utilized secret contracts to reactivate CIA programs that had long been dormant and to outsource the filthy details to unscrupulous psychologists who acted without compunction or compassion.

The CIA should have learned from its prior disasters with human subject testing. Over the years, the CIA was forced to abandon methods specifically designed to degrade prisoners—a practice that had become embedded in the agency’s culture along with a convenient secrecy that served to shield the agency from accountability. Whether practiced under the KUBARK Counterintelligence Manual, Human Resource Exploitation (HRE) program, or the Enhanced Interrogation Techniques (EIT) program, the protocols produced disastrous results. The death of prisoners caused the programs to be abandoned. Yet, without any accountability, these torture programs were restored by new generations of CIA officials that used secrecy laws, redactions, and censorship to cover their misdeeds.

While President Bush sanctioned torture, President Obama gave it sanctuary with his policy of impunity for those involved in the program. President Obama mistakenly thought that his decision not to pursue accountability for the actions of a prior administration would enable his administration to turn the page on torture. In reality, this left the door open for his successor to celebrate torture, proclaiming its effectiveness and urging a return to it. Though the Trump administration has not reinstated the harshest measures of the EIT program, it has gone to great lengths to discourage the International Criminal Court (ICC) from investigating any U.S. officials for possible war crimes for their involvement in the RDI program. This poses real dangers to the United States. Domestically, it leaves the United States vulnerable to international sanctions for failing to adhere to its obligations under the United Nations Convention Against Torture. Internationally, it exposes the hypocrisy of a nation founded upon the rule of law.

These policy blunders by both the Bush and Obama administrations have also enabled the appointment of torture defenders and collaborators—people who have been rewarded for their loyalty to individuals rather than their fealty to the Constitution. Those who appear to accept torture have been promoted to senior policy positions while the roles of others have remained classified. President Trump nominated torture apologist Gina Haspel to become director of the CIA and former Pentagon torture advocator Marshall Billingslea to a State Department Ambassador level as the U.S. Special Envoy for Arms Control. Stephen Bradbury, the former Department of Justice Office of Legislative Counsel (OLC) lawyer who provided legal cover for the Bush torture program, is now general counsel for the Department of Transportation. In this capacity, according to the agency’s web page, Bradbury is performing the functions and duties of the Deputy Secretary. Rather than negatively impacting their careers, their apparent complicity in torture propelled these officials to new heights.

Donald Trump, who believes strongly in unitary executive power, has turned to the infamous John Yoo for advice on how the executive can enact policies without congressional support. John Yoo is the same attorney who provided the legal justification for President Bush’s torture program. In so doing, Trump seeks to eliminate the oversight of the system of checks and balances ensconced in the Constitution we celebrate today. Yoo and others who place loyalty to an individual over loyalty to core American values enable Trump’s desire to expand his authority. While Trump’s tendencies are evident, he is not the first president to use executive power to subvert the rule of law. When such tendencies are given sanction, they pass seamlessly from one administration to the next.

As I write this, we still have 40 prisoners in Guantanamo Bay involved in a legal process that has more in common with the Inquisition than the American criminal justice system. The 10 detainees believed to be most culpable for the attacks on the United States (the attacks we claim to never forget) have been embroiled in an alternate judicial system created to provide the semblance of legitimacy to a system fatally infected by the use of torture. As for the agency that condoned the use of torture, the CIA has only prosecuted one of their own, John Kiriakou. He was not punished for his involvement in the torture program but for disclosing details of the torture program itself. The CIA left former CIA case officer Sabrina De Sousa to fend for herself after she criticized the “Italian job,” a Milan rendition gone wrong. Additionally, the FBI has tainted itself in the ongoing debacle at Gitmo, having been caught recruiting a member of a military commission defense team to spy on other members of their team, emplacing eavesdropping devices in areas where defense counsel met with clients, and assigning an interpreter used by the CIA at torture sites to interpret for defendants at trial.

The debacle at Guantanamo continues. Defense counsel have been threatened with prosecution for revealing any unauthorized details of these matters should they seek to question former CIA personnel involved in the RDI program. The military commission proceedings have included testimony about rival torture programs within the CIA and the extensive involvement of the FBI. The memories of the prisoners being tried before these military commissions are classified, even though the prisoners do not possess the proper clearance levels to even know the information in their memories. Yet these are memories they will never forget as they were caused by the torture inflicted upon them by their captors in the name of the American people.

On this anniversary of the day our democracy and the freedoms we enjoy were born, we should consider whether the manner in which our nation prosecuted the war on terror may ultimately prove to have done more damage than all the terrorist attacks combined. As a nation, we should ask ourselves if we have abandoned the constitutional framework on which this Republic was founded. The United States is a nation built upon the rule of law. We believe in inalienable rights that cannot be abridged by law or man. What we should never forget are the words of Benjamin Franklin when he exited the Constitutional Convention and was asked what kind of government he had helped to create. His response was simple but poignant: “A republic, if you can keep it.” The key to keeping the Republic intact is to honor, unfailingly, the Constitution of the United States.