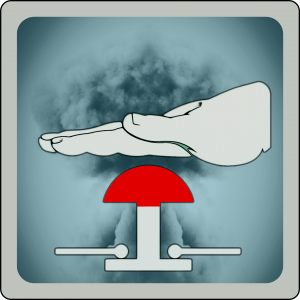 In the United States, the president has the sole authority to deploy nuclear weapons, meaning he or she is not required to consult with anyone prior to ordering a nuclear strike. It also means that were the president to order the use of nuclear weapons, no one, not the Defense Secretary or even the Supreme Court, has the authority to stop him or her. The president’s emergency satchel, often just called the “football,” follows him or her around the world such that ordering a full-fledged nuclear strike is just a phone call away. And while obeying a president’s first strike order is technically subject to the laws of armed conflict, former STRATCOM Commander General Robert Kehler has noted that any questions of legality would only prompt additional consultations rather than an outright refusal by the military to execute the order.

Sole authority was born out of the Cold War when policymakers sought to avoid unnecessary deliberations that would prevent the president from responding swiftly to a possible Soviet attack. While the threat of a nuclear incident is actually very high today (experts say the risk is actually higher than at the height of the Cold War), the nature of the threat is very different. Unlike in the 1960s, the probability of a surprise nuclear attack against the United States is remote. Experts instead worry about a nuclear blunder or a confrontation that steadily escalates into a nuclear conflict. Given the size and strength of international nuclear arsenals, either of these scenarios could pose an existential crisis not only to those countries involved but possibly to every country on earth.

Most other countries with nuclear weapons have modernized their protocols to avoid the prospect of a nuclear catastrophe. In Great Britain, for example, the Defense Minister can appeal to the ruling monarch to overturn a nuclear strike ordered by the Prime Minister. Time permitting, Parliament could also call for an emergency vote of no confidence. India and Pakistan have both established councils responsible for authorizing the use of nuclear weapon strikes. Even Russia seems to have prohibited a single individual from having the sole authority to order the use of nuclear weapons.

Sole authority is problematic because it assumes the president is infallible. In reality, however, U.S. presidents are susceptible to error and lapses in judgment like any other individual. As nuclear expert William Perry recently pointed out, President Richard Nixon was often drunk towards the end of his White House tenure and President John F. Kennedy was frequently under the effect of strong pain medication. The combination of their mood-altering drugs and sole authority to launch nuclear weapons was extremely dangerous. President Trump for his part is not under the influence of drugs, but even Republican lawmakers have conceded that he is impulsive. Such shortcomings might be tolerable for more rudimentary matters but not when a president’s split-second decision could cost hundreds of millions of lives.

Even level-headed presidents could make a bad call if their decision is based on systems that suffer from human or machine error. Recall in January 2018 when the Hawaii Emergency Management Agency sent an erroneous state-wide alert reading: “BALLISTIC MISSILE THREAT INBOUND TO HAWAII. SEEK IMMEDIATE SHELTER. THIS IS NOT A DRILL.” Imagine how President Trump would have responded (or any president for that matter) had they been in Hawaii at the time, thinking they had mere minutes to retaliate.

And if these reasons were not sufficient enough to dispense with sole authority, last month’s Twitter hacking should certainly rouse lawmakers from complacency. Graham Ivan Clark, a 17-year-old high school graduate in Florida, hacked into the Twitter accounts of Elon Musk, Bill Gates, Senator Joe Biden, and President Barack Obama, among others. Fortunately, Clark’s motives were financial. But what if the next hacker has a more sinister motive? For example, what if a more sinister hacker looks to incite an international disaster the next time President Trump takes to Twitter to deride North Korea’s leader, Kim Jong-un?

What if nuclear talks break down again between the United States and North Korea, and President Trump takes to Twitter to express his frustration with an inflammatory but not entirely predictable message, such as: 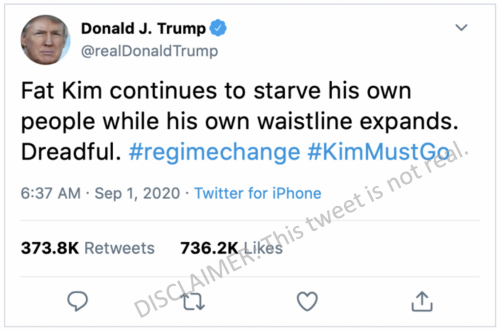 Following Mr. Trump’s tweet, imagine a new round of Twitter hacks begin. But rather than eliciting bitcoin, this hacker aims to incite a nuclear war. What if a hacker were to impersonate international media outlets and foreign leaders with false alerts of a North Korean nuclear strike against U.S. forces in Japan and against Korea. To add to the chaos, the hacker follows up with additional tweets by the U.K. Prime Minister’s office and tweets by China’s official state-affiliated media network, declaring more strikes against Pyongyang, Washington, D.C., and London. (Remember that in the span of just a few hours, Mr. Clark and his two associates had hacked more than 100 Twitter accounts.) How might President Trump react in this situation? 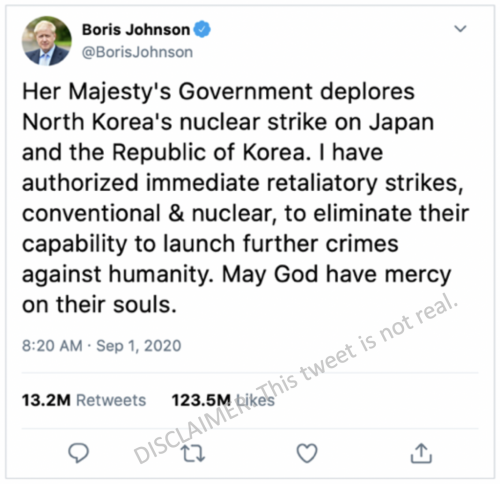 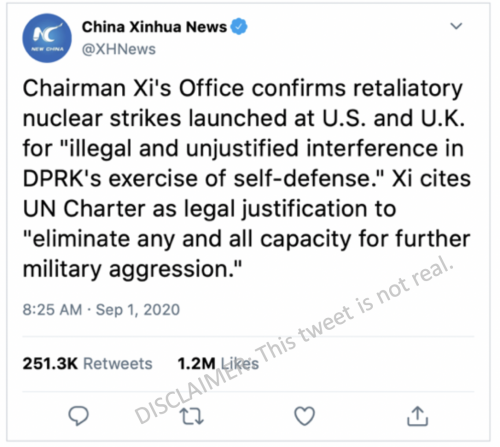 In their recent article for the Centre for Science and Security Studies (CSSS) at King’s College London, Dr. Heather Williams and Dr. Alexi Drew argue that the increasing and aggressive use of Twitter by heads of state has dangerous implications for global security. They examine how social media has rendered the traditional linear threat escalation ladder obsolete and how enigmatic 280-character tweets often lead to uncertainty. This uncertainty, they say, could touch off a nuclear war in a worst-case scenario, such as the one presented above.

The notion that a series of tweets could lead to nuclear war may have been unthinkable, at least until the recent Twitter hacking showed how this nightmare could become a reality. President Trump has repeatedly used Twitter to threaten North Korea or otherwise flaunt the United States’ nuclear capabilities. We cannot know for sure how he would respond to a series of phony tweets suggesting there was a nuclear attack ensuing against U.S. forces and allies. But if there is even a remote chance he would have resorted to a nuclear attack, lawmakers must nix sole authority.

Short of eliminating nuclear weapons altogether, as President Barak Obama pledged to do in 2009, the next best option is to remove sole authority. Earlier this year, Representative Ted Lieu (D-CA 33rd District) introduced a bill that would prevent the president from launching a non-retaliatory nuclear strike without express authorization from Congress. This is a step in the right direction.

But Rep. Lieu’s bill would not apply when the president had determined another state had launched their nuclear strike first. Given lessons learned from the recent Twitter hacks and the ease with which the president could misjudge an inbound strike, Rep. Lieu should strengthen his bill’s language to preclude the president from ever making a sole determination to launch a nuclear strike without concurrence from at least two other high-ranking officials.

This change would actually be fairly easy to implement in practice. According to the U.S. military’s 2020 Nuclear Matters Handbook, the president would immediately participate in an “emergency communications conference” call with the Secretary of Defense and the Chairman of the Joint Chiefs of Staff in the event of a suspected inbound nuclear strike. These advisors would provide the president with two independent information sources that use different technologies, such as radar and infrared satellite sensors, to verify the inbound strike. Rep. Lieu’s bill should thus require another administration official like the Defense Secretary or the Chairman of the Joint Chiefs of Staff as well as one official from outside the administration—either the Speaker of the House or the Senate Majority Leader—to concur with the president’s order to launch a retaliatory strike. This change would reduce the likelihood of a wrongful nuclear strike and avoid relying on a single person’s judgment.

Lawmakers have ignored the outdated and precarious policies governing the authorization of nuclear strikes for too long. It is high time they recognize the urgent need to repeal sole authority and replace it with a policy that is prudent and reflects the realities of the 21st century threat escalation atmosphere. For the sake of humanity, let’s not let a teenager kick-start a nuclear war.

Theo Wilson recently graduated with a master’s degree in public affairs from Princeton University’s School of Public and International Affairs. He is a national security consultant for Speaking Truth to Power, staff editor at JURIST, and a CERL 2019 intern. @twilson008