by Claire Finkelstein and Kevin Govern 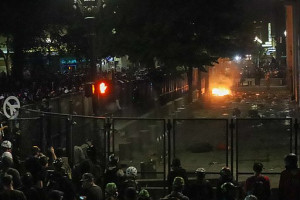 Federal Customs and Border Patrol (CBP) agents clad in military-style gear have been deployed in Portland, Oregon, for the past week, making false “arrests” and claiming the authority of federal law for their actions as part of a “law and order” initiative leading up to the presidential election. Nominally authorized under 40 U.S. Code § 1315, a provision used in this instance to allow CPB agents to assist in protecting federal property, the Portland operation has involved multiple instances of brutality by federal agents against largely peaceful demonstrators. The CBP operated as part of the interagency Protecting American Communities Task Force (PACT), ostensibly “protecting our nation’s historic monuments, memorials, statues, and federal facilities” behind a veil of “operational security” opacity. But arrests are taking place in locations that belie the suggestion that the agents are acting to protect monuments and federal property. These federal “law enforcement” agents have arrived unbidden against the wishes and over the strenuous objections of state governors and local officials. While this president has done many things to raise our fears of encroaching authoritarianism, the actions in Portland threaten democratic governance like nothing we have encountered since the Civil War.

Despite multiple lawsuits brought by local officials and advocacy groups, the president is broadening his target of attack. He is now pledging to send similar armed contingents into cities across the country—from Philadelphia to Chicago to Kansas City to Milwaukee—as part of Operation LeGend, named after LeGend Taliferro, a four-year-old child shot and killed in Kansas City, Missouri, in June 2020. Donald Trump is claiming the authority to order federal agents to engage in brutal law enforcement actions around the country without any clear legal predicate for these actions. State and local officials are now bracing themselves for the onslaught, preparing to marshal their forces to block federal action. Chicago mayor Lori Lightfoot said she would take “legal action” to stop federal agents from engaging in Portland-style operations. More defiant still, Larry Krasner, Philadelphia’s district attorney, has warned that “[a]nyone, including federal law enforcement, who unlawfully assaults and kidnaps people will face criminal charges from my office. At trial, they will face a Philadelphia jury.”

For the first time since the major civil rights reform of the ’50s and ’60s, we are facing the very real possibility that local law enforcement officials will come to blows with federal agents in the streets of our cities. We saw this in September 1957 when President Dwight D. Eisenhower issued Executive Order 10730, putting the Arkansas National Guard under federal authority after the governor of Arkansas attempted to use that force to resist desegregation. Eisenhower also sent 1,000 active U.S. Army troops from the 101st Airborne Division to Little Rock, Arkansas, to maintain order as Central High School desegregated in implementation of the U.S. Supreme Court decision in Brown v. Board of Education. Sixty-three years later, the roles are reversed: the feds are the ones violating individual rights, and local leaders are seeking to defend those rights, only this time the federal government has no court orders or legislation to back it up. The difficulty is that the federal government has many more tools in its toolbox than do their state and local counterparts. In this reverse standoff between federal and state officials, do state and local leaders have the legal and enforcement tools they need at their disposal to protect the rights of their citizens?

The sight of federal agents inflicting violence against lawfully congregating citizens has taken the country by surprise, but it should not have. Donald Trump signaled his intentions to use peaceful protests as an excuse for federal intervention in the immediate aftermath of the death of George Floyd at the hands of Minneapolis police officers. In a Rose Garden speech on June 1, the president stated that if cities or states don’t take “necessary” actions to halt violent protests, he would deploy the U.S. military to “quickly solve the problem for them.” This president usually tells us exactly what he is planning to do; we just have to listen. After using his bully pulpit to openly encourage right-wing protests against state and local social distancing restrictions, and after an even longer history of intentionally fanning the flames of racial hatred among white nationalist supporters, he is now using the very unrest he helped to create as an excuse to deploy federal agents to further infringe on the constitutional rights of Americans.

Recent events in Portland are a variation on a theme we first saw in Lafayette Square on June 1 when Attorney General William Barr purportedly ordered federal troops to fire rubber bullets and release pepper spray on peaceful demonstrators a full half-hour prior to their locally-mandated curfew, all to clear the way for President Trump’s staged photo-op at St. John’s Church. These actions violated a fundamental principle of separation between military engagement and civilian law enforcement, which was articulated in law in 1878 as the Posse Comitatus Act, 18 U.S.C. 1385. That act provides that it is a crime to “use[] any part of the Army or Air Force as a posse comitatus or otherwise to execute the laws,” meaning that the military may not perform “domestic law enforcement activities.” The concept of “posse comitatus” was seen as critical by our Founding Fathers to guard against the possibility of a military dictatorship. For this reason, among others, the administration’s actions were later denounced by Secretary of Defense Mark Esper and even by Chairman of the Joint Chiefs Mark Milley, who regretted his own role in the incident.

There is, however, an important exception to posse comitatus that the administration used to justify its conduct in Lafayette Square, namely the Insurrection Act of 1807. There are multiple historical instances when presidents invoked the Insurrection Act but none over the past 28 years. For instance, President John F. Kennedy invoked it to send federal troops into Mississippi in 1962 and into Alabama in 1963 to enforce civil rights laws. In 1967, President Lyndon Johnson sent active Army and federalized National Guard troops to Alabama to protect civil rights marchers and then to Detroit when there were riots between police and residents after Martin Luther King, Jr., was assassinated. In the Mississippi and Alabama incidents, however, President Kennedy was enforcing a federal court order. In the other two incidents the federal intervention had support from state and local authorities who needed the assistance, unlike in the case of Portland and other actions the president is currently threatening to take. President George H.W. Bush used it in conjunction with governors’ requests to respond to disturbance post Hurricane Hugo in the U.S. Virgin Islands in 1989, then riots in Los Angeles after the acquittal of the officers who assaulted Rodney King in 1992, both times in coordination with local law enforcement authority.

It is unclear whether the Insurrection Act could be marshalled in the present instance because the agents involved are not federal troops but rather border enforcement agents who would not likely be covered by the act. Moreover, experts seem to agree that the gravity of insurrection needed to justify presidential invocation goes far beyond the level of civil unrest that has been occurring in Portland in recent weeks.

In addition, the situation in Portland and the other U.S. cities under threat is legally different from that in D.C., where the latter is governed by federal law. In the various states, the Tenth Amendment to the U.S. Constitution gives state governors and legislatures the sole power to control and regulate measures that affect health, welfare, and safety within the state. That includes state criminal processes and the state criminal justice system.

Governors, for their part, may call up the National Guard when they need backup. These units are the equivalent of the old state militia that governors controlled under the U.S. Constitution. But under the Insurrection Act, the president has the authority to federalize the National Guard in limited instances, such as rebellion within a state, or to call forth the military if there is an insurrection against federal law. In either case, invocation by the president should be a rare last resort, and federalizing the National Guard is generally treated as an extremely provocative move for a president to make and thus must be well justified by a true national emergency.

The situation in Portland is highly distinguishable from the historical uses of these powers under the Insurrection Act and in a way that is particularly concerning for the rule of law in the United States. Some of the looting, violence, and property damage that has occurred in the course of multiple, mostly peaceful demonstrations has not been spontaneous, but rather intentionally orchestrated by far-right extremists who travelled to the demonstrations solely to instigate chaos. The orchestration is hard to miss: the violence gave the Attorney General precisely the excuse he needed to place federal troops and federal agents on the ground, as well as to designate “AntiFa” a “domestic terrorist organization.” The latter move is highly suspect legally. AntiFa activists operate without any centralized leadership or any one organization, domestically or internationally, and such a legal designation has no basis in federal law, which does not provide for designation of domestic groups as “terrorist” organizations. In politicizing the disorder, presidential aides told journalists that presumptive presidential candidate Joe Biden, if he wins, will “allow left-wing fascists to destroy America.” Instigating violence to earn the right to deploy the powers of the state is a tactic drawn from the annals of fascist governments and tin pot dictators. The burning of the Reichstag on February 27, 1933, provides a perfect example.

State-federal conflicts surrounding law enforcement responses to violent protests present a U.S. authoritarianism crisis of nearly unparalleled proportions. Congress needs to act now, and with one voice, to shore up checks and balances against the abuse of federal powers being used to both instigate and then pretend to alleviate civil unrest on a massive scale. It must pass bipartisan legislation to shore up the power of state governors, to protect the First Amendment rights of demonstrators peacefully gathering to express their political beliefs, and to protect and restore the fundamental barrier that our Founders built between civilian and military authorities, as well as that which they conceived to protect state authority under the Tenth Amendment to the U.S. Constitution.

Claire Finkelstein is the Algernon Biddle Professor of Law and Professor of Philosophy at the University of Pennsylvania Carey Law School and faculty director of the Center for Ethics and the Rule of Law (CERL). T: @COFinkelstein

Kevin Govern is a professor at Ave Maria School of Law in Naples, Florida, and a founding executive board member of the Center for Ethics and the Rule of Law (CERL).

The views expressed here do not necessarily reflect the views of any institution or organization with which the authors are affiliated.