Skip to main content area Skip to institutional navigation Skip to search
« Back to The RuleOfLaw Post
U.S. military • July 02, 2020

Posse comitatus: Both more and less than meets the eye 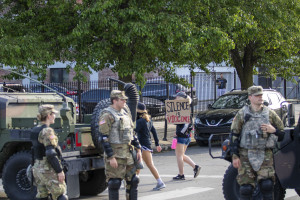 Recent civil unrest in response to racial injustice has brought the issue of military involvement in domestic law enforcement to the fore. While President Donald Trump has strongly endorsed the use of military personnel to keep and restore public order, his top defense advisors have been considerably less sanguine about deploying federal troops to patrol American streets. A host of retired flag and general officers has spoken out forcefully against a militarized response to widespread protests as contrary to both democratic principles and healthy civil-military relations.

An apolitical military plays a vital role in maintaining constitutional balance and public trust in the armed forces. Amid the current public debates about the role of the police in American society and the role of the U.S. military in domestic policing, an unfortunate myth has gained traction—that is, the Posse Comitatus Act of 1878 (PCA) marked “a cornerstone of civil-military relations” instantiating the principle of military nonpartisanship. The actual historical and legal context of the PCA is considerably more fraught; understanding its complex and ignoble genesis provides a more accurate guide to both improving policing and delineating the proper confines of military support. A clear-eyed view of the legacy and meaning of posse comitatus restrictions is essential to navigating turbulent times.

The PCA prohibits federal (Title 10) military forces from being directly employed in domestic law enforcement operations absent other constitutional or statutory authority. The most significant of these exceptions is the Insurrection Act, which predated the PCA and has its roots in the armed frontier uprisings of the early American republic that gave rise to more robust federal powers under the U.S. Constitution. The current iteration of the Insurrection Act permits the president to use the armed forces in extraordinary circumstances to suppress rebellion and execute the law, either unilaterally or at the request of state officials, after issuing a formal proclamation ordering “the insurgents” to disperse.

The PCA, a criminal statute that applies to the Army and Air Force, has never been the subject of prosecution. It has, however, been interpreted by both the executive branch and federal courts largely in the context of defendants seeking to exclude evidence due to alleged violations by military investigators. The law’s restrictions have been extended to the Navy and Marine Corps by Department of Defense (DoD) policy and related legislation.

National Guard troops under either State Active Duty or Title 32 status—i.e., falling under the command of their respective governors—are not subject to posse comitatus restrictions. Meanwhile, the Coast Guard remains unique as both a military service and a law enforcement agency that resides primarily under the Department of Homeland Security unless directed to operate within DoD.

The PCA is often misconstrued as an ideological outgrowth of the American Revolution, tied to the grievances against “Standing Armies” in the Declaration of Independence and the prohibition against quartering soldiers in private homes in the Bill of Rights. Far from an affirmation of enlightened founding principles, however, the PCA was actually born in horrific racial violence and the federal government’s abdication of its duty to protect newly freed slaves in the postbellum South.

Under the Congressional, or Radical, Reconstruction period after the Civil War, the defeated Southern states were divided into military districts, with federal troops protecting black voting rights and enabling the election of interracial Republican state governments and even congressional delegations. This progressive experiment was met with racial terrorism by the Ku Klux Klan and other violent organizations seeking to reassert white supremacy through fear and intimidation. Within a decade, the always tenuous Northern will to enforce Reconstruction and secure black male suffrage through military occupation had waned, and the disputed election of 1876 resulted in an informal “compromise” the following year whereby the withdrawal of federal troops was exchanged for a Republican presidential victory.

The PCA’s adoption as part of the 1878 Army appropriations bill fit squarely within this context as an effort led by Democratic lawmakers to ensure Reconstruction would not be re-imposed to challenge the Southern white oligarchy. Contrary to its reputation as “the embodiment of the American tradition of anti-militarism,” the PCA’s sordid history reveals instead an expression of Southern resentment and white backlash to the protection of black political rights.

This historical context adds special significance to President Dwight Eisenhower’s invocation of the Insurrection Act in 1957 to enforce a court order desegregating Little Rock Central High School over the Arkansas governor’s intransigence. As the former Supreme Allied Commander in Europe during World War II, Eisenhower was famously reluctant to federalize the Arkansas National Guard or deploy the 101st Airborne Division domestically. He reiterated that “if the use of local police powers had been sufficient, our traditional method of leaving a problem in those hands would have been pursued.”

Eisenhower’s attorney general argued that the administration had complied with the PCA because other federal law authorized the military intervention. However, it is unlikely that the PCA was the main source of Eisenhower’s hesitation to engage in the first place. Rather, the president was responding to older and deeper Anglo-American principles circumscribing military involvement in civilian affairs, as well as concerns about federalism. The latter prompted him to offer public reassurance that “Federal troops are not being used to relieve local and state authorities of their primary duty to preserve the peace and order of the community.” The Arkansas Governor’s blatant obstruction of a federal court order—and his use of the National Guard under state command to do so—ultimately changed Eisenhower’s calculus.

Of course, good law can have bad origins. Yet overemphasizing the PCA can be counterproductive to sound analysis of the military’s proper role in a democratic society. On the one hand, there are other criminal provisions and DoD regulations keeping the armed forces out of the political process and prohibiting electoral interference. On the other hand, Congress has steadily expanded exceptions to the PCA for military support to civilian law enforcement agencies beginning with the “War on Drugs” and extending into counterterrorism activities. As the legal basis for military-law enforcement cooperation has been enhanced, the Pentagon’s primary concern has often had less to do with the appropriateness of military involvement in civilian affairs than with resource constraints and their impact on military preparedness and the armed forces’ readiness for war.

The widely held misconception that the PCA is foundational to constitutional norms should not be allowed to obscure the more fundamental point: the people’s right to peaceably assemble should not be abridged at all. Where an assembly turns violent, state and local law enforcement agencies are responsible for quelling unrest in their communities. The federal government does not possess states’ inherent police power to enforce order, and arrest authorities for federal agents are specifically delineated by federal statute. Military investigative and apprehension authorities under Title 10 are especially limited based on location (DoD installations) and the status of the suspect (military members subject to Uniform Code of Military Justice jurisdiction). Separate and apart from the PCA, the U.S. military was wisely designed so as not to be a national police force.

The nation’s military leadership is right to be sensitive to the “perception of the military involved in domestic politics” and to believe that the armed forces’ apolitical nature is central to its position of trust in American society. Former Defense Secretary Robert Gates recently offered a useful reminder that this is a challenge spanning presidential administrations and political parties. The importance of a politically neutral military does not stem from a statutory relic of the tragic betrayal of civil rights in the post-Civil War South. It emanates from the fundamental insight that the armed forces in a democratic society come from, and must stay true to, the population they represent and defend. As General George Washington wrote to the New York legislature upon assuming command of the nascent Continental Army, “When we assumed the Soldier, we did not lay aside the Citizen.”

Lieutenant Colonel Charles G. Kels is an attorney-adviser in the Office of the Legal Adviser of the U.S. Department of State and a judge advocate (JAG) in the U.S. Air Force Reserve. His views do not reflect those of any government agency.