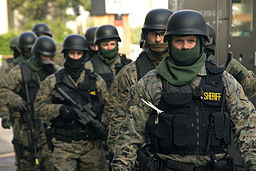 Unless otherwise attributed, the conclusions and opinions expressed are solely those of the author and do not reflect the official position of the U.S. government, Department of Defense, or Ave Maria School of Law.

On June 16, 2020, President Trump signed Executive Order 13929, On Safe Policing For Safe Communities, ostensibly to encourage better police practices and to establish a database to keep track of officers with a history of excessive use-of-force complaints. During the week prior, he made clear his intention to increase funding and equipment to civilian law enforcement: “We’ll take care of our police. We’re not defunding police. If anything, we’re going the other route. We’re making sure our police are well-trained, perfectly trained, they have the best equipment.”

In the wake of civil unrest across the nation after George Floyd’s death, much attention has been placed on President Trump’s initial albeit unfulfilled desire to invoke the Insurrection Act so that he could order active duty military personnel to engage in civilian law enforcement. Stated differently, the president contemplated deploying the military inside the United States to suppress protests by American citizens.

Receiving much less attention, however, has been the president’s interest in the equipment used by civilian law enforcement personnel. As civil unrest grew, President Trump admonished the nation’s governors, telling them that they “have to dominate, if you don’t dominate you’re wasting your time.” In the face of large demonstrations where protesters easily outnumber law enforcement, the police rely on their training and their equipment. When that equipment resembles that of a military arsenal, it is easier for that domination to occur. The presence of military equipment and military munitions, however, can also have the opposite effect, causing an escalation of violence and reinforcing mistrust between the people and the police. There are, in fact, enough concerns about the transfer of military equipment that the current federal transfer program should be temporarily halted. Such a hiatus would enable lawmakers to ensure that future transfers, should they resume, are fully consistent with the police reform measures outlined by the president in Executive Order 13929.

For nearly 30 years, the federal government has provided support to state and local law enforcement agencies through the transfer of military equipment. The Department of Defense Excess Property Program, commonly referred to as the 1033 Program, is primarily oriented towards equipping law enforcement counter-drug activities, but it sometimes leads to very different capabilities and employments. Section 1033 of the National Defense Authorization Act (NDAA) for fiscal year 1997 (Public Law 109-364) and support provided under it—has garnered much public scrutiny and increasing media coverage since the fall of 2014.

The authority for the transfer of military equipment was first established in 1990. Section 1208 of the National Defense Authorization Act for Fiscal Year 1990 (Public Law No: 101-189) allowed the Secretary of Defense to “transfer to Federal and State agencies personal property of the Department of Defense, including small arms and ammunition, that the Secretary determines is– (A) suitable for use by such agencies in counter-drug activities; and (B) excess to the needs of the Department of Defense.” In 1996, Congress replaced Section 1208 with Section 1033. Section 1033 later became Section 2576a, but to this day it is still known as the “1033 Program.”

The Defense Logistics Agency (DLA) noted that “[s]ince its inception, the 1033 Program has transferred more than $5.1 billion worth of property. In 2013 alone, $449,309,003.71 worth of property was transferred to law enforcement.” As part of its outreach to civilian agencies, the DLA predicted that “[i]f your law enforcement agency chooses to participate, it may become one of the more than 8,000 participating agencies to increase its capabilities, expand its patrol coverage, reduce response times and save the American taxpayer’s investment.”

Critics of the program, such as the ACLU, have remarked that “a disturbing range of military gear [is] being transferred to civilian police departments nationwide.” For equipment that is dispensable because it is “excess” to the bona fide needs of the U.S. military, it is interesting to note that “one-third of all war materiel parceled out to state, local and tribal police agencies is brand new.”

Accountability problems also surfaced as 184 state and local police agencies were reportedly suspended from participating in the Pentagon’s 1033 Program for losing weapons or failing to comply with other stipulations. Notably, the nationally-known ex-sheriff of Maricopa County, Joe Arpaio, admitted that his department had been suspended from the program. The department lost nine firearms—eight .45-caliber pistols and one M-16 rifle—out of 200 weapons issued to it from the surplus program. Twenty to 22 of the weapons vanished over the years, but roughly half were recovered from retired or then-current deputies who, incredibly, took them home. Under the 1033 Program, the Maricopa County Sheriff’s Office amassed an arsenal of “a Hummer, a tank, 90 M-16 rifles, 116 .45-caliber pistols, 34 M-14 rifles and three helicopters.” In 2017, the U.S. Government Accountability Office reported that by creating a fictitious agency and a fake website, it was able to procure $1.2 million worth of items, including night-vision goggles, simulated rifles, and simulated pipe bombs.

This 1033 Program, coupled with National Guard troops deployed to Ferguson, Missouri, became the subject of critical media focus in August 2014. Following the police shooting of the teenager Michael Brown, the Ferguson Police Department responded to protests and riots with a robust show of force, using gear that one media outlet documented was not obtained through the 1033 Program, yet others speculated to the contrary.

In response to calls for a “demilitarization” of civilian police forces, then U.S. Attorney General Eric H. Holder Jr. said “[a]t a time when we must seek to rebuild trust between law enforcement and the local community…I am deeply concerned that the deployment of military equipment and vehicles sends a conflicting message.”

In 2017, the hands of time turned back—and the flow of equipment was restored—when President Trump issued Executive Order 13809 revoking Executive Order 13688 and the recommendations issued pursuant to that order. The effects of this revocation were a swift increase to quantity and types of gear available to law enforcement and concurrent reductions to interagency coordination, transparency, and accountability in the 1033 Program. The Justice Department’s background paper on the decision commented that the previous restrictions “sen[t] the message that we care more about public safety than about how a piece of equipment looks, especially when that equipment has been shown to reduce crime, reduce complaints against and assaults on police, and makes officers more effective.”

As a result, 1033 Program equipment ballooned yet again. For example, transfers of military gear to Virginia police and sheriffs’ offices more than doubled between 2018 and 2019 to $3.8 million, with Hampton Roads’ police department and sheriff’s office acquisitions tripling to nearly $854,000 worth of equipment.

As for the 1033 Program’s efficacy, political scientist Kenneth Lowande’s recent working paper found that police department access to military equipment from 2014 to 2019 had “no detectable impact on violent crime or officer safety,” and concluded that “federal reforms designed to demilitarize local law enforcement would not have the downside risks suggested by proponents of military transfers.” Another study by Jonathan Mummolo in 2018 concluded that “[m]ilitarized police units are more often deployed in areas with high concentrations of African Americans, even after adjusting for local crime rates.” Furthermore, “[t]he routine use of militarized police tactics by local agencies threatens to increase the historic tensions between marginalized groups and the state with no detectable public safety benefit.”

Senator Brian Schatz (D-HI) succeeded in adding language to the 2018 defense appropriations bill that encouraged the Department of Defense to re-establish a working group to evaluate the propriety of military equipment transfers under the 1033 Program. Such a working group existed in the Obama administration, prior to President Trump’s revocation of Executive Order 13688. Its purpose has been described as coordinating “the management of the 1033 program and similar programs at other agencies. It also engaged with non-federal government stakeholders, including law enforcement organizations, state officials, and civil rights groups, to get input and recommendations.”

Senator Rand Paul (R-KY), leading a bipartisan group of senators, has proposed the Stop Militarizing Law Enforcement Act (S. 1856), which seeks even stronger accountability for the Pentagon’s surplus giveaway program, and limits on military weapons transfers. Senator Bernie Sanders’ (D-VT) recent tweets include a list of police reforms for Senate consideration, namely prohibiting “the transfer of offensive military equipment to police departments.” The tweet, however, does not define what military equipment is offensive as opposed to that which is defensive.

In the House of Representatives, Ruben Gallego (D-AZ7) proposed changes to the 1033 Program as part of a broader criminal justice reform package, calling the 1033 Program “one of the most absurd programs in the United States government.” His statement continues: “Community police officers are not soldiers. Fellow Americans are not the enemy. We must stop providing weapons of war to police.” Representative Karen Bass’ (D-CA37) Justice in Policing Act of 2020 (H.R. 7120) would hold law enforcement accountable for misconduct, improve transparency through data collection, reform police training and policies, and restrict the transfer of military equipment to police.

Moving forward, Congress has several potential courses of action. First, Congress could end the 1033 Program entirely. Despite concerns raised by Senator Schatz and Representative Gallego, such a remedy fails to account for the benefits of the program. Second, Congress could elect to continue the program “as is.” This, too, is not advisable. While there are recognized benefits to the program, there are changes to be made as well. The third course of action would be for Congress to restart the 1033 Program, after the aforementioned hiatus, with certain preconditions. For example, Congress could require local communities to hold referenda on whether their respective law enforcement agencies should start or renew participation in the program and, if approved, the nature of the equipment such agencies would be entitled to receive. In support of this requirement, Congress could also delineate specific categories of equipment eligible for transfer. This effort would enable local communities to make more well-informed decisions. For example, Congress could establish various categories of equipment and delineate the types of equipment that may fall within each to include but not be limited to health and personal safety equipment (first aid kits and body armor); disaster response (tents, cots, and sleeping bags); intelligence gathering equipment (drones and night vision goggles); defensive equipment (barricades and gas masks), and; offensive equipment (weapons, ammunition, explosives).

President Trump’s June 16, 2020, executive order was cast as “a big part of the solution to restoring, renewing and rebuilding our communities.” But to end the transfer of offensive military equipment, there needs to be Congressional review of the Insurrection Act and reform of the surplus Department of Defense military equipment program. Such a review will enable Congress to establish stricter delineations regarding military cooperation with civil authorities, further limiting the 1033 program in particular while still focusing on preparation, partnerships, and vigilance.

Kevin Govern is a professor at Ave Maria School of Law in Naples, Florida, and a founding executive board member of the Center for Ethics and the Rule of Law. He began his legal career as an Army Judge Advocate, serving 20 years at every echelon during peacetime and war in worldwide assignments involving every legal discipline. He also deployed to the U.S. Virgin Islands under Insurrection Act authority as the legal advisor to the task force conducting civil disturbance operations in the wake of Hurricane Hugo. He has served as an assistant professor of law at the United States Military Academy and has taught at California University of Pennsylvania and John Jay College. Unless otherwise attributed, the conclusions and opinions expressed are solely those of the author and do not reflect the official position of the U.S. government, Department of Defense, or Ave Maria School of Law.