Skip to main content area Skip to institutional navigation Skip to search
« Back to The RuleOfLaw Post
American democracy • June 23, 2020

The Lafayette Square assault: A turning point for democracy in America 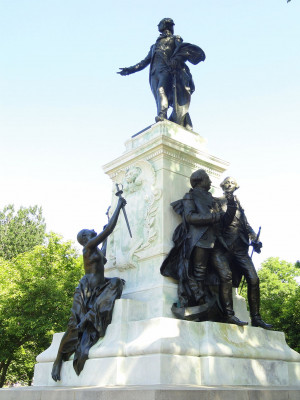 “Democracy don’t rule the world; you better get that through your head/ This world is ruled by violence; but perhaps that’s better left unsaid.”
–Bob Dylan, Union Sundown

On June 1, 2020, federal park police were ordered to attack and clear citizens who were assembled peacefully in protest in Lafayette Square. There was no violence until the federal police moved in and used “smoke canisters and pepper bombs,” as well as clubs and shields. Members of the National Guard do not seem to have been directly engaged, though they were deployed at the scene, and many soldiers reported feeling that their use was “wrong.”

Given the confusion caused by similar uniforms worn by National Guard, active duty, and reserve troops —a confusion increased by lack of any identification at all for some federal police units—rumors spread among the protesters that active duty military personnel had been used against them. Active duty soldiers from two storied U.S. Army Divisions—the 10th Mountain and the 82nd Airborne—were in fact deployed to the outskirts of Washington, D.C., but there is no indication that they entered our capital city. Even U.S. combat troops “staging near the Capitol,” however, is disturbing.

Pointedly, Mayor Murial Bowser of the District of Columbia said no metropolitan police were involved, and she expressed dismay that national troops and police would be used in this manner. The protesting citizens were violating no law: even the curfew invoked in Washington had not yet arrived.

Only with the benefit of hindsight will we understand the full significance of this event. We know that democratic governments of any size and influence in the world have been preserved and sustained only through the prudential and limited use of military force. The key to the preservation of liberty lies in ensuring that martial force is limited to protecting democratic governments from outside threats—and not used to quell the boisterous and sometimes disorderly expression of internal political dissent.

The authors of the book How Democracies Die explain that a key factor in the decline of democracies in other countries has been whether a major party sacrifices the principles of self-government to the temptations of authoritarian power. The improper use of the military to put down political protests is a bellwether for an administration that is falling under the spell of tyranny. Republican political leaders now face a stark choice: turn a blind eye to the rising signs of authoritarian government in the United States or exhibit the courage required to place country over party. History will be an unforgiving judge.

Until the presidency of Donald Trump, the historical trajectory of the United States has been on the side of democracy rather than tyranny. Although our record is by no means perfect, and it has been stained by slavery and its aftermath, we have followed a path of serving as an arsenal of democracy ever since the beginning of World War II when we played a decisive role in defending the United Kingdom and liberating continental Europe from the clutches of Nazi rule, and then stopping the expansion of imperial Japan. For students of history, as well as veterans of World War II and subsequent wars who fought and saw many compatriots die in order to preserve our democratic ideals, it is very hard to believe that a president of the United States would turn against our founding values of democracy and freedom. Yet that is where we find ourselves today.

The purpose of the Lafayette Square assault was disproportionately trivial. The president and his entourage, complete with General Mark A. Milley, chairman of the Joint Chiefs of Staff, in combat fatigues, strolled through the violently cleared park to hold a photo opportunity at St. John’s Church. Symbolically at least, the president followed a violation of the First Amendment’s right of peaceable assembly with disrespect for the First Amendment’s protection of freedom of religion. Reports reveal that no federal official asked church leaders for permission to use their premises, and government agents evicted occupants of the church to clear the field of any impediments to their media show, a show that included the president holding a Bible aloft. Although he did not explain the meaning of this gesture, history is likely to view it as a symbolic expression of aggressive victory over peaceful protests.

Former military leaders were shocked into action. Eloquently and perhaps most politically weighty, James Mattis, a former four-star general in the Marines, found himself “angry and appalled” over the events that transpired in the park. Mattis had served for approximately two years as the Secretary of Defense in the Trump Administration, so this was no cry of pain from the liberal left. He had seen up close and personal President Trump’s manner and character, and had remained silent long enough. “The protests are defined by tens of thousands of people of conscience who are insisting that we live up to our values—our values as people and our values as a nation,” Mattis wrote. “We must reject and hold accountable those in office who would make a mockery of our Constitution.”

Mattis was not alone. Three former chairmen of the Joint Chiefs of Staff condemned the violence at Lafayette Square. General Martin Dempsey tweeted on June 1, 2020, the same day as the assault, that “America is not a battleground. Our fellow citizens are not the enemy.” On June 2, 2020, in The Atlantic, Admiral Mike Mullen wrote: “It sickened me yesterday to see security personnel … forcibly and violently clear a path through Lafayette Square to accommodate the president’s visit outside St. John’s Church… .Whatever Trump’s goal in conducting his visit, he laid bare his disdain for the rights of peaceful protest in this country, gave succor to the leaders of other countries who take comfort in our domestic strife, and risked further politicizing the men and women of our armed forces.” On June 7, 2020, General Colin Powell deplored President Trump’s actions at Lafayette Square and said: “We have a Constitution. We have to follow that Constitution. And the president’s drifted away from it.”

The former chairmen were joined by a litany of other senior military officers. Retired Army General Joseph Votel emphasized the need to maintain “an apolitical military.” On June 11, General Milley also came around and apologized for lending his image to the event, saying that it was “a mistake” to have participated in the photo op.

Meanwhile, President Trump has continued to make a career of promoting police brutality. As Adam Serwer writes in The Atlantic, “The chaos sweeping across the United States has many causes, but the one over which the president has the most control is the culture of lawlessness and impunity he has cultivated and embraced. When you attempt to impose ‘law and order’ without justice, you get chaos.” At the advent of the Trump Administration, for example, one of the first acts of former Attorney General Jeff Sessions was to end the Obama-era federal review of metropolitan police departments.

The president’s threats to use standing military troops against peaceful dissent in both large and small cities across our land must be recognized by Republicans and independents, as well as Democrats, as far beyond the pale. Military repression of peaceable protest is the sine qua non of authoritarianism of the kind that the United States has traditionally opposed everywhere in the world. A bipartisan coalition of political leaders must stand up and condemn the assault at Lafayette Square—as well as to oppose larger threats to “call in the military” against American citizens, such as recently proposed by Senator Tom Cotton in the New York Times.

Lafayette Square is symbolic historically because its name honors the Marquis de Lafayette, the French general who led American forces during our revolution, including in the victorious campaign against the British in Yorktown, Virginia. Perhaps his name helped to inspire our modern military leaders to defend our ideals of democracy when they were trampled in the park that honors his memory. More leaders should follow on this path, especially Republicans and independents. Public opinion among military families and veterans appears also to be swinging against the president, and we should all listen.

In a dark version of our future, even the authority of current and former military leaders like James Mattis, Martin Dempsey, Mike Mullen, Colin Powell, Joseph Votel, and Mark Milley will be ignored by the Republican members of Congress. Fearful of retribution from tyrannical tweets or Fox News falsehoods, inert Republican leaders would then become fully complicit in the rise of authoritarian rule.

In a brighter future, Republican leaders will hear the unanimous voices of our most respected military leaders and see the looming danger. They will recall that the ideals of our American republic should stand above partisan politics. They will join our military leaders and condemn the use of force against peaceable protests. Some may also follow the lead of Senator Mitt Romney, who joined the Washington protesters in proclaiming that “Black Lives Matter.” At least, they will speak out for constitutional limits on the domestic use of military force and, if the president continues to violate these limits, they will join in a patriotic call for him to resign.

It may come down to this: will Republican leaders choose complicity—like disgraced leaders in Weimar Germany or Vichy France before them—or will enough of them oppose the improper use of our military in furtherance of the establishment of a new American authoritarianism? Will they permit the president to “disband democracy” or allow “a transformative wave of change” demanded by the mass protests?

In one direction or the other, the Lafayette Square assault on June 1, 2020, will stand as a turning point in the history of American freedom.

Eric Orts is the Guardsmark Professor of Legal Studies and Business Ethics at the Wharton School of the University of Pennsylvania and serves on the Advisory Council of the Center for Ethics and the Rule of Law. @EricOrts