With Biddle Library’s OverDrive collection you can download books to read and listen to on your Kindle, tablet, phone, PC or Mac.

You can also place holds on items that are checked out and be notified when they become available. To borrow items, sign in using the 8-middle digits of your PennCard. 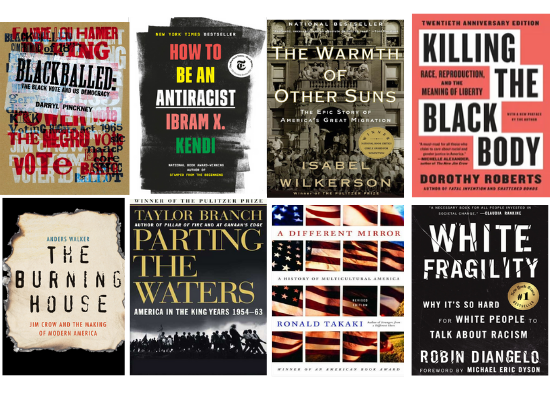 How to be an Antiracist

Kendi takes readers through a widening circle of antiracist ideas—from the most basic concepts to visionary possibilities—that will help readers see all forms of racism clearly, understand their poisonous consequences, and work to oppose them in our systems and in ourselves.

White Fragility: Why It’s So Hard For White People To Talk About Racism

Referring to the defensive moves that white people make when challenged racially, white fragility is characterized by emotions such as anger, fear, and guilt, and by behaviors including argumentation and silence. These behaviors, in turn, function to reinstate white racial equilibrium and prevent any meaningful cross-racial dialogue.In this in-depth exploration, DiAngelo examines how white fragility develops, how it protects racial inequality, and what we can do to engage more constructively.

The Warmth of Other Suns

Pulitzer Prize–winning author Isabel Wilkerson chronicles one of the great untold stories of American history: the decades-long migration of black citizens who fled the South for northern and western cities, in search of a better life.

Blackballed: The Black Vote and US Democracy

Blackballed is Darryl Pinckney’s meditation on a century and a half of participation by blacks in US electoral politics. In this combination of memoir, historical narrative, and contemporary political and social analysis, he investigates the struggle for black voting rights from Reconstruction through the civil rights movement to Barack Obama’s two presidential campaigns.

A Different Mirror: A History of Multicultural America - audiobook

Upon its first publication, A Different Mirror was hailed by critics and academics everywhere as a dramatic new retelling of our nation’s past. Beginning with the colonization of the New World, it recounts the history of America in the voice of the non-Anglo peoples of the United States-Native Americans, African Americans, Jews, Irish Americans, Asian Americans, Latinos, and others-groups who helped create this country’s rich mosaic culture.

The Burning House: Jim Crow and the Making of Modern America

In this dramatic reexamination of the Jim Crow South, Anders Walker demonstrates that racial segregation fostered not simply terror and violence, but also diversity, one of our most celebrated ideals. He investigates how prominent intellectuals like Robert Penn Warren, James Baldwin, Eudora Welty, Ralph Ellison, Flannery O’Connor, and Zora Neale Hurston found pluralism in Jim Crow, a legal system that created two worlds, each with its own institutions, traditions, even cultures.

In volume one of his America in the King Years, Pulitzer Prize winner Taylor Branch gives a masterly account of the American civil rights movement. Moving from the fiery political baptism of Martin Luther King, Jr., to the corridors of Camelot where the Kennedy brothers weighed demands for justice against the deceptions of J. Edgar Hoover, here is a vivid tapestry of America, torn and finally transformed by a revolutionary struggle unequaled since the Civil War.

One of Bryan Stevenson’s first cases was that of Walter McMillian, a young man who was sentenced to death row. The case transformed his understanding of mercy and justice forever.

Between the World and Me

In a profound work that pivots from the biggest questions about American history and ideals to the most intimate concerns of a father for his son, Ta-Nehisi Coates offers a powerful new framework for understanding our nation’s history and current crisis.

Killing the Black Body: Race, Reproduction, and the Meaning of Liberty

In 1997, this groundbreaking book made a powerful entrance into the national conversation on race. From slave masters’ economic stake in bonded women’s fertility to government programs that coerced thousands of poor Black women into being sterilized as late as the 1970s, these abuses pointed to the degradation of Black motherhood—and the exclusion of Black women’s reproductive needs in mainstream feminist and civil rights agendas.

This groundbreaking book by legal scholar and social critic Dorothy Roberts examines how the myth of race as a biological concept—revived by purportedly cutting-edge science, race-specific drugs, genetic testing, and DNA databases—continues to undermine a just society and promote inequality in a supposedly “post-racial” era.

The Fire Next Time

A national bestseller when it first appeared in 1963, The Fire Next Time galvanized the nation and gave passionate voice to the emerging civil rights movement.It consists of two “letters,” written on the occasion of the centennial of the Emancipation Proclamation, that exhort Americans, both black and white, to attack the terrible legacy of racism.

new Libby app by OverDrive to browse and download e-books and audiobooks.

If you already have a Libby account through your local library, you can add University of Pennsylvania Law School. In the app, go to your account and select add a library, then follow steps 2 and 3. Learn more about Libby