Reforming police recruitment and training is a national security imperative 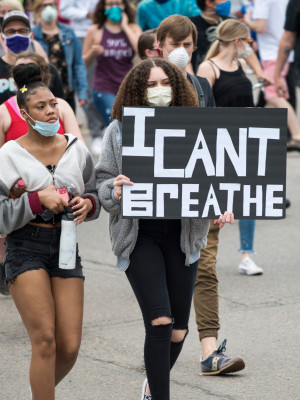 The views expressed in this post are those of the author and do not necessarily reflect those of her employer or CERL.

The United States has grappled with racism in law enforcement for years, but amid a parallel national crisis brought on by the COVID-19 pandemic, the problem of endemic racism seems all the more acute. Being bombarded with the dark side of humanity when we should be banding together to defeat an invisible enemy can compound the feeling of hopelessness. But times of crisis can also lead to opportunity. Policing ought to be understood as a vital element of national security. The ability to secure and maintain the rule of law is essential to any functional democracy. But if the ability to be secure or to have access to justice only extends to some, democracy cannot flourish and national security will be placed at risk. We must view law enforcement through an inclusive security lens and transform the way we recruit, staff, train, and support law enforcement personnel accordingly.

I have worked with law enforcement for nearly 20 years – in Afghanistan, Haiti, and the United States. I know that most officers are brave, compassionate, and caring people. But I have also learned that individual compassion, bravery, and caring cannot fix a broken system.

Current events present a unique moment to finally free our system of law enforcement from the injustice that pervades it. It should not be squandered. We need more than just a change to the mission statements of police departments; we need to rethink our entire approach to law enforcement. First, let us transform how law enforcement agencies recruit personnel to better reflect the communities they serve. Only 12% of law enforcement professionals are women (a figure that has remained stagnant for nearly 30 years) despite research that demonstrates that women tend toward a style of policing that uses less physical force and emphasizes de-escalating violent confrontations.

Second, we should move to train officers in less violent and more communicative methods of policing. An extensive review of individual state mandates for law enforcement basic and in-service training requirements derived from publicly available information on state laws, official “Police Officer Standards and Training” requirements, and academy curricula outlines reveals that police training in general is deficient in several key respects. Most states do not have specific mandates related to teaching de-escalation, management of bias, critical thinking, or problem-solving. Most still employ stress-based approaches to the training of recruits, characterized by rigid discipline, intense physical fitness requirements, and paramilitary drills despite evidence that this helps cultivate defensive, depersonalized police officers who identify more with their peers than with the public.

We should also monitor how an officer’s health can affect a precinct’s relationship with entire neighborhoods. It is estimated that as many as 30% of police officers are suffering from Post-Traumatic Stress Disorder at any given time. Individuals under chronic stress or experiencing fatigue are more irritable, less capable of empathy, and more likely to rely on unconscious biases to make decisions.

Third, all law enforcement agencies should improve their transparency and accountability by taking concrete steps to effect vital change in culture and policies. Effective enforcement of law relies on trust and legitimacy. Officers must carry out their responsibilities within the framework of our country’s democratic principles without abusing their extraordinary powers or violating individual rights and our Constitution. After all, these officers are entrusted with the power to take away someone’s freedom – or someone’s life. The insular culture of law enforcement discourages accountability, meaning that instead of intervening to stop bad behavior, we are far too often confronted with the image of officers standing by and allowing abuse to happen. The normalization of this lack of transparency and accountability is demonstrated by our collective response to individual officers who have chosen to speak out and condemn egregious abuses of force. We commend them for being brave when in fact we should expect – even demand – such accountability.

Incentivizing accountability is both a cultural and a mechanical task. Culturally, we need to eliminate the so-called blue wall of silence or blue code. That goes back to training; this informal code exists because police are trained to trust and rely upon each other rather than trust and engage with communities. Mechanically, we need to strengthen policies requiring officers to intervene when abuses are committed and more severely punish those who fail to intervene. National guidance through the promulgation of model codes would help.

Police officers have chosen a singularly difficult calling. They are responsible for enforcing our laws, preserving peace, and ensuring communities are safe from crime, violence, and terror. The profession is challenging, stressful, and dangerous. But in a democracy, policing is also inseparable from our principles as a nation. Law enforcement is the main institution in our society that tasks individuals with enforcing the power of the state on the men and women its members have sworn to protect and serve.

For millions of Americans, being black is also challenging, stressful, and dangerous, and law enforcement is too often a symbol of oppression. Even among police themselves, according to a 2016 Pew Poll (the most recent statistic on this data point available), only 59% believed steps had been taken to improve relationships with minority communities. This relationship gap is problematic under normal circumstances, and we are long past normal. When a black man is hunted down and murdered while jogging and it takes 70+ days to arrest the alleged perpetrators, the legitimacy of the entire justice system suffers.

Historical pain is amplified each time a community’s trust in the very people sworn to protect it is eroded. When the ability to exercise one’s rights depends, even only in part, on the color of one’s skin, it betrays the foundations of the rule of law. This undermines our national security.

It is time to reject policing methodologies that are inconsistent with core democratic values and to take on the systemic racism that is pervasive throughout our criminal justice system and our society. While addressing racism within the criminal justice system will not solve larger systemic and societal issues, the act of improving security and access to justice for African Americans is an important start. How can one truly be expected to thrive economically, socially, academically, or otherwise when basic security is not a given? Lifting our knees from the necks of those most vulnerable allows them to breathe, opening the pathway to more systemic change. It is a beginning, not an end, but it is a necessary start.

Angelic Young has worked with law enforcement for nearly 20 years, including at the Department of State and the Institute for Inclusive Security. She is also a Truman National Security Fellow and has taught International Policing and the Rule of Law at George Mason University’s Schar School of Policy and Government. @AngelicYoung