Challenging the limits of executive authority: An analysis of Trump’s toolbox during COVID-19

by Clayton Keir and Lachlan Cormie 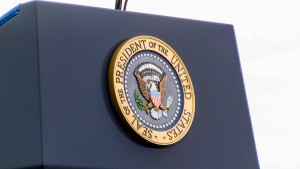 President Donald Trump has an executive identity crisis. On the one hand, he wants to elevate his executive authority to new heights by pressuring governors to open their states and by temporarily suspending all immigration. On the other hand, he remains reluctant to use his emergency powers to the fullest extent, like invoking the Defense Production Act, to keep vital sectors of the economy open. He has also taken no action to ensure that on-line businesses such as Amazon continue to ship essential items while its workers stage walkouts across the country. Given how distraught the president must be that he can no longer emphasize a strong economy in his re-election bid, it is puzzling that he does not take more decisive action. We argue that, paradoxically, Trump has only scratched the surface of what the law allows him to do to strengthen the economy.

In the past month, President Trump has invoked the Defense Production Act (DPA) of 1950 to compel GM and 3M to produce PPE and ventilators and for Puritan Medical Products to produce swabs for testing in response to the COVID-19 epidemic. The DPA authorizes the president to require businesses to prioritize and accept contracts for materials and services necessary to support national defense. The federal government has invoked the law frequently throughout its history and hundreds of thousands of times during the Trump administration alone. In spite of the government’s frequent use of the DPA, we know of no challenge to its constitutionality. That fact is remarkable given that the DPA lets the executive determine what is necessary for defense and then compel a company to change its production to support the president’s determination. In other words, the DPA gives presidents significant authority to ensure that certain sectors of the economy stay open and that their efforts serve the emergency needs of the country.

In the present crisis, invoking the DPA appears necessary. President Trump’s orders meet a very apparent need for producing more ventilators to send to hard-hit ICU units, PPE to protect health care workers on the front lines, and swabs to alleviate a shortage in testing kits. Prior to invoking the DPA vis-a-vis 3M, Trump and 3M had feuded over the company’s production and export of masks. Trump’s order blocks 3M from exporting its products until U.S. demands have been met. Given the likely overwhelming public backlash for refusing, the companies would need compelling reasons to decline. But what could happen if these companies believed that exporting was more profitable and refused to meet Trump’s demands?

The seminal case on the matter, Youngstown v. Sawyer, might appear to support the companies’ claim but in fact would work against it. Fearing that a pending strike by the United Steelworkers of America would cripple the country’s efforts during the Korean War, President Truman directed Secretary of Commerce Charles Sawyer to seize and operate steel mills throughout the country. The Truman administration claimed authority for its actions under the president’s Article II Commander-in-Chief powers, but the U.S. Supreme Court concluded that Art. II powers did not authorize the president to seize property to end labor disputes. The Court acknowledged that Congress has the power to authorize the president to seize the steel mills, but concluded that Congress had not done so in this case. This point was famously set out in Justice Jackson’s concurrence, which argued that the president’s authority is at its strongest when he acts “pursuant to an express or implied authorization of Congress” and at its weakest when he acts against Congress’ will. Because Congress had explicitly refused to authorize industry seizures in the Taft-Hartley Act, Jackson concluded that Truman’s authority was at its weakest. Truman also undercut his claim to executive authority by declining to invoke the DPA, believing it was “much too cumbersome, involved, and time-consuming for the crisis which was at hand.” Had he done so, he might have prevailed.

Unlike in Youngstown, President Trump’s authority is at its highest in invoking the DPA against GM, 3M, and Puritan because there is clear congressional delegation of authority for this act. Furthermore, the recent rescue package, the CARES Act, explicitly authorizes the president to use some of the recovery funds for DPA purchases. Section 4017 mentions that funds should be allocated to “increase access to materials necessary for national security and pandemic recovery.” The package further allocates an “additional amount for ‘Defense Production Act Purchases,’ $1,000,000,000, to remain available until expended, to prevent, prepare for, and respond to coronavirus, domestically and internationally.” While the legislation does not explicitly mention property seizure, it does indicate Congress’ approval for invoking the DPA.

Two World War I cases from before the passage of the DPA suggest that the Supreme Court should side with the administration. In Omnia Commercial Co. v. United States, Omnia, a maker of hardware, had a contract with Allegheny Steel to buy steel at below-market prices. The federal government requisitioned all of Allegheny’s steel on the grounds that it needed the steel for the war effort and ordered the company not to send any to Omnia. Omnia sued to recover the lost profits from the contract. The Supreme Court sided with the government, noting that the government had taken control of “railroads, steel mills, shipyards, telephone and telegraph lines, the capacity output of factories and other producing activities,” providing implicit permission for those activities. The Court further noted that the government owed nothing to companies whose contracts with those entities were disrupted. Thus, the Court not only permitted government seizures but also limited the government’s liability for just compensation. In Brooks-Scanlon Corp. v. United States, President Woodrow Wilson exerted his power under the Emergency Shipping Act to take over Brooks-Scanlon Corporation’s rights under a contract for the construction of a ship. While the Court found that the plaintiff was entitled to compensation, it did not invalidate the seizure. The current Supreme Court should rule similarly in the current crisis.

President Trump has substantial powers to ensure that production in various industries continues. Invoking the DPA vis-à-vis the three companies is a start but should only be the tip of the iceberg. He could be making greater use of these powers to make rapid testing more available and thus help at least some people remain employed. He could have made companies produce more testing kits so that Maryland Governor Larry Hogan would not have had to buy 5,000 from South Korea. If President Trump wishes to push the envelope on executive power, instead of restricting immigration he should be using the DPA to build stronger infrastructure to help facilitate shipping. Given that he has invoked the act hundreds of thousands of times already, it remains a mystery why he is so reluctant to use his powers in the current crisis.

Limits to Presidential Power, Even in a Pandemic

Tensions between Amazon and its workers continue to intensify. On April 21, hundreds of Amazon workers called in sick to protest working conditions. To date, Amazon has already fired three workers who criticized their labor practices, and the first Amazon warehouse worker died due to COVID-19 complications. While Amazon continues to maintain its position that warehouse conditions are safe for operations, its employees are staging protests, walkouts, and calling in sick.. Given Trump’s willingness to support demonstrations protesting lockdowns around the country and the large number of executive orders he has issued, it would not be uncharacteristic of him to try and compel Amazon workers to go back to work. Does President Truman’s inability to stop the steelworkers’ strike in Youngstown mean Trump’s effort would similarly fail?

Although Truman could not end the strike, the Youngstown decision did not preclude future presidents from ending strikes. The emergency provisions of the Taft-Hartley Act of 1947 authorize the president to have his attorney general seek an injunction to end strikes that “if permitted to occur or to continue, imperil the national health or safety.” In United Steelworkers of Am. v. United States, steel union members engaged in a nationwide strike that crippled U.S. steel production. Considering steel essential for national security, President Dwight Eisenhower had his attorney general seek an injunction to end the strike. The steel union subsequently challenged the constitutionality of the emergency provisions of the Taft-Hartley Act. The Supreme Court held that because Congress had passed the act, the courts were bound to grant injunctions in cases of emergency. The Court found that the steel strike constituted such an emergency. In United States v. National Marine Engineers’ Beneficial Ass’n., the Second Circuit upheld an injunction against members of the United States merchant marine. The court found that the strike would endanger the nation’s petroleum supply, which was essential for the national defense as well as the “production and transportation of foods and drugs, for heating, for the making of electrical energy, and for many other purposes, [which are] essential to the physical health of the people.”

The courts should side with the administration on all the arguments above. Although COVID-19 is not a military matter, the Taft-Hartley Act’s emergency provisions use the language “imperil the national health or safety.” Reduced shipping of masks would imperil the national health. Given Amazon’s large role in America’s shipping, the reduced supply due to a strike would seriously threaten public safety.

Amazon and President Trump should take note that if Amazon workers decide to walk out due to the hazardous situation created by COVID-19, the president may be limited in his ability to force them to return. Amazon must improve the safety of working conditions to ensure that Americans can still receive essential items during the crisis. Instead of trying to end the strike, Trump should instead use the DPA to compel more companies, such as Maersk or Old Dominion Trucking, to ship essential items, especially if an Amazon strike creates a shortage of shipping capacity. That would be a legal and constructive use of his authority.

The president possesses extraordinary powers to revitalize the economy in this pandemic; however, he has chosen to emphasize restrictions on immigration and battles with governors. If he wishes the push the envelope on executive authority, he should do so by using the DPA to compel more businesses to produce essential items. This would allow the president to fill any gap in services by compelling more companies to engage in shipping vital products.

Clayton Keir is a rising third-year student at the University of Pennsylvania Carey Law School. He received his undergraduate and master’s degrees from the Georgetown School of Foreign Service. He has worked for the Department of State’s Nuclear Smuggling Outreach Initiative and is the founder and president of Squash Dreamers, a nonprofit that provides squash and English training to Syrian refugee girls residing in Jordan.@ClaytonKeir

Lachlan Cormie is a sophomore (C’22) at the University of Pennsylvania majoring in international relations with a concentration in cybersecurity and minoring in statistics.@CormieLachlan