The Document that Stirred the World

On exhibit in the Biddle Law Library Gateway

The Plight of the Displaced Jews in Europe: A Report to President Truman
By Earl Grant Harrison
Released by the White House on September 29, 1945

On loan from Seed the Dream Foundation 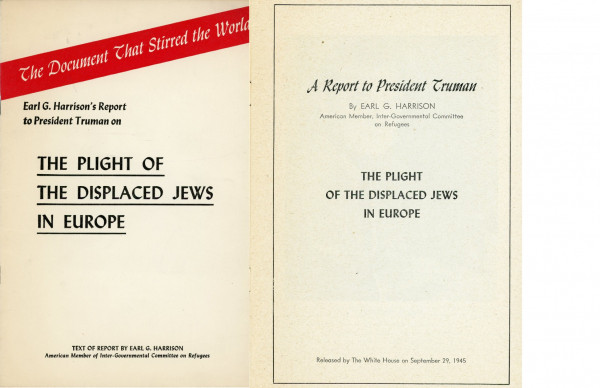 Listed by the United States Holocaust Museum in Washington, D.C. as a “Primary Source and Documentation” title on displaced persons and commissioned by President Harry S. Truman, The Plight of the Displaced Jews in Europe, documented and described the health and living conditions of camps holding displaced persons following World War II, their long and short term needs, and how such needs were not being met.
Harrison’s report was part of the motivation for the creation of the Anglo-American Committee of Inquiry on Palestine, which was formed to suggest policies for dealing with both Jewish war refugees and the problems of Palestine. In 1946, The New York Times called Harrison’s response “the first official proposal for the immediate settlement of 100,000 Jews in Palestine.”* The report has been credited by many historians as a critical step in the development of United States support for the State of Israel.

Excerpts from the University of Pennsylvania Law Review
“The Life and Character of Earl G. Harrison,” by Lewis M. Stevens
March 1956, Vol. 104

Earl Grant Harrison was born in the Frankford section of Philadelphia on April 27, 1899, the birthday of Ulysses S. Grant. The son of foreign born parents, he had the sturdy upbringing of an American home in the middle economic group. At Frankford High School, Earl was president of his class in the freshman, sophomore and senior years, played on all the school athletic teams except cricket, and participated in other school activities such as dramatics. Just as he had been a natural leader in high school, so it was at the University. He played varsity soccer, was managing editor of the Daily Pennsylvanian, took part in the Mask & Wig productions, debated, won a Phi Beta Kappa key his junior year, was a member of the Sphinx Senior Society and was valedictorian of the Class of 1920. During his sophomore year, his college work was interrupted when he served as Second Lieutenant of Infantry from July to December, 1918.

Earl decided to enter the University of Pennsylvania Law School, to which he was awarded a faculty scholarship. He became Case Editor of the Law Review, a member of Sharswood Club, and of the Order of the Coif. He graduated twelfth in his class in 1923 and promptly entered into the practice of law with a large Philadelphia firm. Soon he was recognized as a trial lawyer of great promise. Earl started to practice with the law firm of Saul, Ewing, Remick & Saul, of which he became a partner in 1932. At the same time, for thirteen years, he acted as law clerk for William I. Schaffer, who became Associate Member and later Chief Justice of the Pennsylvania Supreme Court. For several years, he also did legal research for Judge Edwin O. Lewis of the Court of Common Pleas No. 2 of Philadelphia County.

At the University of Pennsylvania Law School in 1932-33, and in 1936-37, he served as a part-time instructor in Partnerships, Evidence and Equity. After his government service during the war years, Earl, in 1945, accepted the invitation to become Vice President of the University of Pennsylvania in charge of Law and Dean of its Law School. There followed three of the happiest years of his life. In the spring of 1946, Dean Harrison journeyed to Austin, Texas, and testified in behalf of Herman Marion Sweatt, a Negro who had been denied admission to the School of Law of the University of Texas solely on account of his race. As Dean of the Law School of the University of Pennsylvania, he spoke out against the absurdity of calling a one-pupil school a law school, as the State of Texas tried to do in claiming it offered Sweatt equal but separate law school facilities. This case on appeal proved to be a successful forerunner of the historic case of Brown v. Board of Education, which struck down the “separate but equal doctrine” in public schools. In September, 1948, Earl Harrison resigned his deanship and immediately entered the law firm of Schnader, Harrison, Segal & Lewis, where he plunged once again into the active practice of law and conducted much substantial litigation in the ensuing years. He had become one of the best trial lawyers of Philadelphia and enjoyed great popularity among his fellow lawyers. One of his active professional interests was the work of the American Law Institute, of which he was treasurer.

On March 24, 1942, President Roosevelt nominated Earl, for the position of Commissioner of Immigration and Naturalization. Senator Joseph Guffey, of Pennsylvania, invoked his personal privilege to oppose the appointment, but after several months of opposition, the Senator withdrew it at the personal request of the President, and Earl was sworn in on July 20, 1942. In addition to the largest number of applications for citizenship in the history of the service, the Commissioner had direct charge of and responsibility for the nation’s detention facilities for aliens whose loyalty was in doubt, for the Mexican border patrol and for many special war time duties. Earl visited each of the twenty-two district offices of the Immigration and Naturalization Service as well as the ten internment camps.
Excerpts from the University of Pennsylvania Law Review “The Life and Character of Earl G. Harrison,” by Lewis M. Stevens. March 1956, Vol. 104

In 1944, President Roosevelt appointed Commissioner Harrison the United States representative on the Intergovernmental Committee on Refugees. This committee helped refugees to be repatriated where possible and also provided transportation costs for individual refugees and family groups which found it possible to make plans to emigrate. This work took Earl abroad for conferences with representatives of other interested countries and what proved of lasting importance placed him in close touch with the immense refugee problems thrown up by the persecutions and war dislocations in Europe.
On June 22, 1945, President Truman entrusted Earl Harrison with a special mission to Europe “to inquire into the condition and needs of those among the displaced persons in the liberated countries of Western Europe and in the SHAEF area of Germany-with particular reference to the Jewish refugees-who may be stateless or non repatriable.” Earl made an on the spot survey of displaced persons’ camps in Europe in July and August of 1945, particularly in Germany and Austria. His report to the President, made in late August, 1945, went directly to the root of the matter.

On the strength of this report, President Truman, on August 31, 1945, asked Great Britain to admit 100,000 Jewish refugees to Palestine. He also ordered General Eisenhower, Military Governor of the American Zone of Occupation in Germany, to improve the conditions in camps for displaced persons under his jurisdiction. This immediately brought about some marked improvements in the care of these homeless people. Earl Harrison’s report also hastened the abolition of the camps. It was printed in full in the New York Times for September 30, 1945, and stirred much public discussion among the American people.

Excerpts from the University of Pennsylvania Law Review “The Life and Character of Earl G. Harrison,” by Lewis M. Stevens. March 1956, Vol. 104

News coverage of Harrison’s report from 1945 through 1946. View the clippings from the exhibit here. 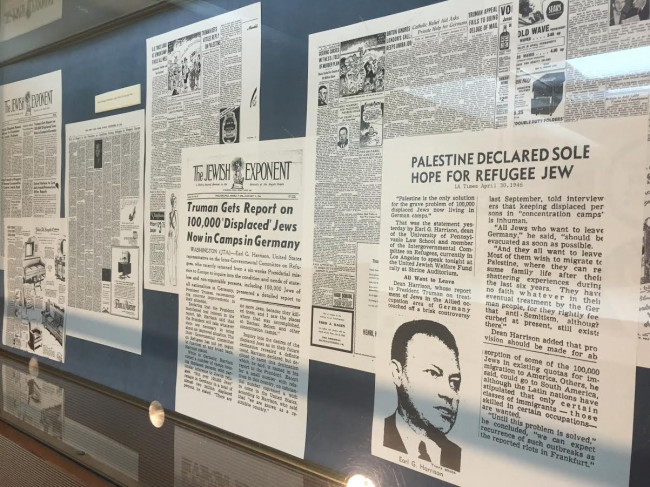 ﻿A selection of texts from the Biddle Law Library on displaced persons, immigration, and refugees, both in the past and the present.