One Belt One Road Initiative: Global China Amid the Wave of Anti-Globalization

Illegal trafficking of wildlife is a major current issue in Asia as flora and fauna in Africa and Asia are under threat. Ten of thousands of African elephants are killed every year because of a burgeoning ivory trade in Asia and precious timbers have been disappearing from Asian forests.

How can we stop flora and fauna in Africa and Asia from being illegally smuggled into Asia, Europe and the United States? How do federal agencies, local and international actors enforce wildlife laws to combat this global scale crime? Are the Convention on International Trade in Endangered Species of Wild Fauna and Flora (CITES), Endangered Species Act, the Lacey Act and laws prohibiting smuggling effective tools to control the market?

This year’s Symposium will bring together experienced practitioners and scholars to discuss and present the practical and legal challenges in combating international wildlife trafficking.

This program has been approved for 3.0 substantive CLE credits for Pennsylvania lawyers. CLE credit may be available in other jurisdictions as well. Attendees seeking CLE credit should bring separate payment in the amount of $60.00 ($30.00 public interest/non-profit attorneys) cash or check made payable to The Trustees of the University of Pennsylvania. 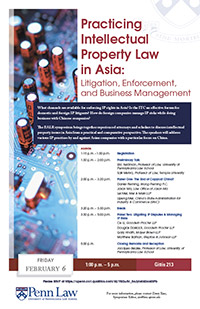 A Historic and Comparative Perspective

Criminal law and procedure reform is a highly sensitive issue since it implicates judicial justice and protection of human rights. China revised its Criminal Procedure Law in 2012 and it was viewed a significant step forward. However, the precise consequences remains to be seen.

This year’s symposium will bring together scholars, practitioners, and advocates to discuss implications of the new Criminal Procedure Law and other related issues in a comparative perspective. In addition, we will attempt to examine the history and evolution of criminal procedure laws in other East Asian countries as well as in the U.S. in order to shed light on the future of China’s criminal procedure reform.

This program has been approved for 3.0 hours of substantive law credit for Pennsylvania lawyers.  CLE credit may be available in other jurisdictions as well.  Attendees seeking CLE credit should bring separate payment in the amount of $30.00 cash - or check payable to “The Trustees of the University of Pennsylvania”.

The traditional model of anti-corruption enforcement, based on domestic regulations and enforced by a nation’s judiciary or other special agencies, faces numerous challenges in the Asian context. Where the independence of the judiciary and even-handed application of the laws is in doubt - especially in new democracies or autocracies -reliance on law and governance methods alone has been thought insufficient. The increasingly global economy and necessity for trans-national cooperation further complicate this picture, and also imply that these local matters have become questions of global significance. The internet and social media, as well as more traditional media, may play a greater role in shedding light on abuse and acting as a check on power. This symposium will explore how these non-state actors, specifically corporates, media, and other societal institutions deal with government corruption and their own corruption in East and Southeast Asia.