Fall 2011- Comparative Internet Law in the US and European Union 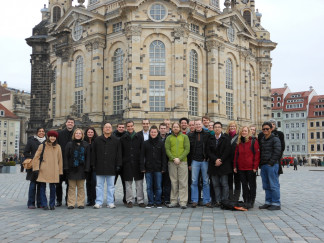 The Fall 2011 Global Research Seminar led by Christopher Yoo took on a crucial and timely issue by comparing Internet policy in the US and the EU.  The U.S. and Europe have historically taken widely divergent approaches to the regulation of communications technologies.  In more recent years, the approaches have begun to converge, in part because of the increasing globalization of the telecommunications market and in part because of certain intellectual insights that have transformed the conventional wisdom about economic regulation. This seminar compared the regulatory approaches taken in the U.S. and Europe, studying both their emerging similarities and the key differences in intellectual commitments that tend to keep them distinct.  As part of the seminar, students traveled to Washington DC, Germany and Brussels to interview and do field research with policy makers, academics, government and non-governmental officials, corporate executives and other stakeholders. This unique course was co-taught by Professor Thomas Fetzer in parallel with a seminar at the Dresden University of Technology; students from each institution collaborated on a final joint research project.