The Best-in-Class (BiC) Regulator Initiative seeks to identify core attributes of regulatory excellence to develop a forward-looking, generalizable framework that any regulator can use to track and improve its performance.  The Initiative has generated the following papers and reports:

As these papers and reports have been drafted, they have been linked to on this page and on the “Research” page. Their release has also been announced on our “Updates” page.  If you sign up for updates, you will also receive an email notification as new material is released.  We invite comment on any of these projects.

This paper identifies regulator-identified attributes of excellence by reviewing strategic plans for common themes and attributes related to superior performance. It identifies common issues and themes, and points to best features and deficiencies in the plans.  This paper distills from what these other agencies identify in their own strategic plans to be the common attributes or frameworks that appear to be used in practice to define superior regulatory performance around the world, developing a coherent set of complementary attributes drawn from the overall review.   The full paper is available online.

Research Papers on the “Regulatory Core”

In addition, we have commissioned research papers on four primary dimensions of a regulator’s work: Priority Setting, Problem Solving, People (internal management), and the Public (external engagement).  As illustrated in the figure on this page, each of these four areas interact to result in the outcomes of concern to the public and to the policymakers who established the regulator to solve particular problems.
By surveying existing research, the work on these “regulatory core” papers has informed PPR’s identification of possible attributes a BiC regulator might exhibit in each of these core areas.  They also provide a research base for further progress by the AER and other regulators toward the achievement of continuous improvement.  A total of five comprehensive research papers were prepared for this part of the project. 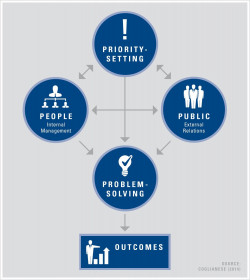 Selecting a regulator’s priorities from the universe of possible problems within the scope of the regulator’s authority (risk analysis, risk management decision analysis).

Management of a regulator’s internal resources (organizational structure and culture).

Interaction with affected individuals and organizations when making and implementing decisions (transparency and public participation).

Each paper has identified key issues, providing the reader with a thorough background on what is known about each topic and what are the important factors that a regulator seeking excellence should consider.

These research papers on the “regulatory core,” which have been posted online, are intended to provide a menu of options for a regulator to address – the pros and cons of each, or the conditions under which some options are better than others. The purpose is not necessarily to recommend any particular approach, especially since the research literature is not yet be definitive on some issues.

Expert Papers on “What Makes a Regulator Excellent?”

Defining, and then attaining, regulatory excellence raises a series of questions that the Best-in-Class Regulator Initiative is trying to answer.  We have assembled a group of internationally recognized experts on regulation who have answered the question of “What Makes a Regulator Excellent?” in a series of discussion papers that will later be expanded into chapters for a book to be published by the Brookings Institution Press by the end of 2016.

These discussion papers approach the general question of regulatory excellence from the distinct disciplinary and research-based perspectives of the individual authors.  Collectively, these papers touch on a variety of key issues involved in defining and assessing best-in-class regulatory performance, including:

Drafts of the discussion papers framed the discussion at the International Expert Dialogue held in March, 2015, at the University of Pennsylvania Law School. We invite you to review these papers and welcome feedback or comment on them.

We hosted three key dialogue sessions during the winter and spring of 2015 to foster interactive discussion among both international experts and interested individuals and organizations in Alberta on the attributes of a best-in-class regulator and the metrics for evaluating a regulator’s success in achieving best-in-class status. Each of these sessions was followed by the public release of a detailed report synthesizing the key issues discussed, the main themes from each dialogue, and the perspectives shared and trade-offs identified.

The various papers and reports of the Best-in-Class Regulator Initiative will inform a final convenor’s report, developed by Cary Coglianese, which will draw on the findings of the other papers and the various dialogue sessions to produce a framework that regulators can use to pursue and measure best-in-class regulatory performance.

The convenor’s report, as with the entire Best-in-Class Initiative, will not be an evaluation of the AER’s current or past performance, but rather will identify evidence-based metrics and methodologies that the AER or any regulatory authority could use to guide its management and decision-making.

We anticipate that an interim convenor’s report will be posted online in the early spring, highlighting key issues for discussion and deliberation.  We encourage and will welcome public comment on the interim report.

Send us your comments at comments@bestinclassregulator.org