Preparing to Protest: Direct Action, the Arts of Protest and Media Impact 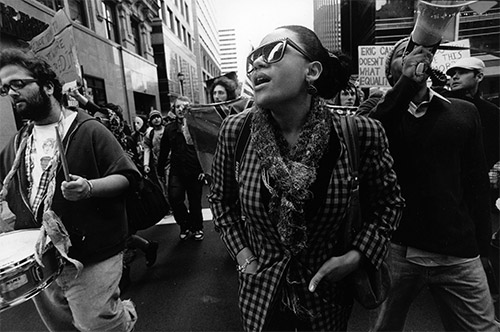 Regina Austin, a law professor at Penn and director of the Penn Program on Documentaries & the Law
Screening “Marchers on Blair Mountain” (2011) (Zein Nakhoda, director) (Video)

9:30-10:45 AM
II. The Arts of Protest and Visually Impactful Direct Action

Direct action protest is performance.   Its constituent elements draw on various art forms, including choreography and movement; drama, comedy, and satire; passionate oratory and poetry; music and song; memorable posters and placards; costumes and masks; and puppets.   Close your eyes and iconic images and sounds of protests of the past captured in photographs, films, and videos and on soundtracks and records will readily come to mind.   What makes them iconic?  The first panel will focus on proven techniques for maximizing the visual effects of direct action protests.

Digital cameras are ubiquitous.  Nearly everyone has a cell phone.   It follows that nearly everyone can be a media maker capturing direct action protests as they unfold.  On what aspects of a protest should the amateur focus?  What kinds of images of protestors have the most impact?  Are there legal restrictions on nonparticipants recording protests?  Is there anything protesters can do to prevent surveillance of demonstrations by the police?  Is it legal to record the police interacting with protestors?  Does it make a difference if recording the police in action in public places is the subject of the protest action?

What are your experiences, thoughts, observations and theories about direct action?  Can you put them into a few words or a drawing?  Materials for making protest signs will be available during lunch for attendees to engage directly in the art of protest.  Cameras (yours) to capture the effort will be everywhere.  An open mike and a cinematographer will allow you to make a statement about the significance of your sign.

2:00-2:30 PM
IV. The Impact of Digital Visual Media on Protests around the World

Direct action seems to be on the uptick throughout the world.  What roles have digital visual technology and news media that are international in scope played in this expansion of protest?  What impact do images of protest in one part of the globe have on the incidence of protest in other parts of the world?

Even if it is legal to capture images of people engaged in direct action protests in public, are there ethical limits based on notions of privacy and anonymity that should nonetheless be respected?  Do public protestors have any privacy rights with regard to posting their images on social media?  Suppose the protestors are members of socially vulnerable groups, such as children, undocumented immigrants, or persons with intellectual or mental disabilities.   Media coverage is essential to publicizing and growing a movement.  It can also be a source of surveillance and cooptation.  Is it possible to keep such social media making authentic and on message?

This program has been approved for 4.0 substantive law credit hours and 1.5 ethics hours for Pennsylvania lawyers.  CLE credits may be available in other jurisdictions as well.  Attendees seeking CLE credit should bring separate payment in the amount of $55.00 (or $30.00 for public interest attorneys) cash or check payable to "The Trustees of the University of Pennsylvania."  If you will not be attending the entire program the fee will be $15.00 per credit hour.